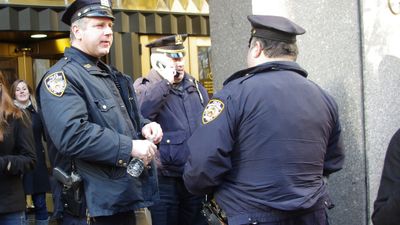 In the criminal investigation it is very important to gather information such as whether accidents similar to those handled occurred in the past or whether there was a similar case in the vicinity. The New York City Police Department (NYPD) has introduced a system to collate such crime patterns, and it became clear that it is useful for criminal investigation.

The NYPD is using a new pattern recognition system to help solve crimes - The Verge
https://www.theverge.com/2019/3/10/18259060/new-york-city-police-department-patternizer-data-analysis-crime

NYPD independently developed a system dedicated to the criminal investigation called " Patternizr " in order to quickly verify the crime pattern. By using Patternizr, which can search hundreds of thousands of incident data collected in the past, the analyst can find cases with characteristics similar to those currently under investigation from a wide range.

Work has been done to find similar incidents in criminal investigations before, but before Patternizr was developed, he was looking for similar crime patterns from a thick physical file. In addition, the analysts in each department were not able to grasp the incidents occurred in different provinces. However, using Patternizr makes it possible to collate crime patterns in a wider range, which leads to a reduction in time.

Already in 77 provinces in NYPD criminal pattern verification using Patternizr is done, and it is active mainly in the investigation of robbery and theft cases. In the theft case aiming at the home depot of the home center near the Yankee stadium in the New York / Bronx district , he found out similar cases that occurred several weeks ago from the feature of "using syringes for crime" It seems that it led to the arrest of the criminal. Rebecca Shutt, who was in charge of the case, said, "Patternizr found out the case that occurred in another province I did not know.Patternizr is a very useful system, and in cases that could not be found in the traditional way It will discover the connection with. " According to Mr. Evan Levine who is assistant commissioner at NYPD's data analysis department and Alex Chohlas-Wood, former director of the division, the data analysis department has developed Patternizr over the next two years, He said he was able to reach the release in December. It seems that NYPD is the first in the United States to introduce a system that extracts features of crime and find similar incidents. "It is to improve the safety of Patternizr as well as the public.If you can more easily discover the pattern of crime, it will lead to more quickly identifying suspects," Levine says.

The development team trained the program using incident data of the past 10 years classified by specialist analysts and raised the accuracy of Patternizr. Patternizr analyzes the pattern of crime based on elements such as invasion to the site, the tendency of items to steal, and the distance between crime scenes, which will greatly improve the efficiency of criminal investigation.

While the crime rate in New York City is on a downward trend, more than 68,000 robberies and theft cases have occurred annually and the similar criminal extraction is used in sex crime and murder case investigations. In Patternizr 's pattern matching, it is said that he is not using suspect' s race so as not to introduce racial prejudice into the investigation process. by katie chao and ben muessig