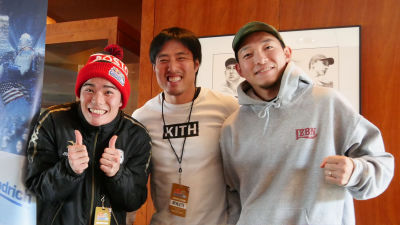 The final tournament of a simple and clear sports " Red Bull Crashed Ice Boston 2019 " competing for who is running the ice track fastest is the local time 19:00 on February 9, 2019 (Japan time 10 February 2019 Hour) from Fenway Park in Boston, USA. On the day before the finals tournament, I have heard many talks to Japanese national team players.

It is a fine day without clouds on the day of the finals. However, the temperature is quite low and it is expected to be below freezing at the race time. 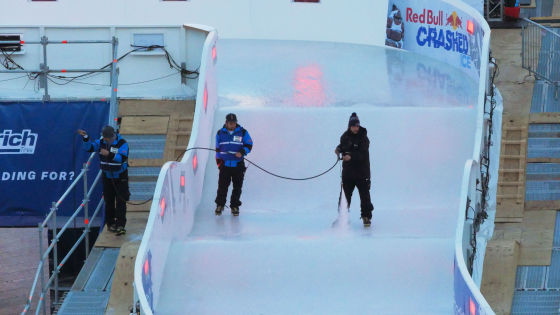 About the Course: Before the race, I was able to talk to Mark Producer Mark Van der Slaus, so I asked questions about the race track. G:
How long did it take to make the race track this time? Also, how many staff members are involved? G:
Did you have any difficulties especially at the stadium opening?

mark:
Certainly this is the first time at the stadium. Although it is a unique place in the past, it was able to work closely with Fenway Park officials, so it is very smooth. The work was completed without problems.

G:
Although it is said that it puts out the thickness of ice by repeated water over and over, how thick is it?

mark:
The ice thickness on all tracks is about 10 centimeters.

G:
Fenway Park is a natural turf, but how did you take countermeasures?

mark:
It is not particularly difficult compared with other tracks. First of all, natural mats are protected by covering the whole with a mat and laying steel plates.

G:
The pitcher mound was a special design.

mark:
Yes, I still protect the pitcher mound. The shape of the mound is raised so we are not placing a steel plate. By painting the mound on the top, I try to make sure that there is a mound there. G:
Are there any differences in the setup between tracks using natural snow in snowies such as Finland and trucks using artificial ice like Yokohama and Boston?

mark:
The work of making ice does not change anything. However, in the case of Yokohama, Ice was melted by (warm) temperature, so it was a fight with it. In Finland the temperature is low, so it is a repetition of the task of hardening the snow. Here in Boston the temperature was good, but since occasional falling rain sometimes creates ice, it was necessary to adjust.

G:
Where is the feature or difficult part of this track?

mark:
It is difficult to name difficult points and points in any place by challenging. As the athlete runs each course for the first time, every course is challenging. I think that it can be said that it is a very fast track because the 32-second time slot has appeared in the time trial.

G:
There were two big cobs in the flat part just before the goal, and the athletes were also struggling. At the end, I think that "big reversal" is about to happen, but is there an aim for that? mark:
Every track is distinctive and characterized. By making rolls just before the goal, we try not to finish easily.

G:
It is a simple question, how long does it take to dismantle the course?

mark:
Probably it will take about 2 weeks. It takes about ten minutes to disassemble the track, melt the ice, and disassemble the scaffold. I keep ice now not to melt, but melt the ice in the opposite process. After three weeks I can play baseball (laugh)

G:
Thank you for taking the time.

Women's Japan representative interview - After the time trial of the day before, I was able to talk to Junko Yamamoto and Risa Yoshinosei .

Regarding the impression of the course, Yamamoto said "Although it is easy for girls to slip off, it is difficult to slip off when trying to speed up, but it is surprisingly difficult, but at places such as" You can not get back anymore if you fail here ... " If there are players who have won the race, the first half is likely to be in a dumpling state without mistakes, so the two cobs just before the goal may separate the victory or defeat. " While practicing opportunities are small, I think that running with LCQ is an opportunity and in the last Cobb I would like to try sliding.

Yoshida said that the "beauty" of the artificial truck is impressive. The state of ice is also good, and it seems that it flew more pleasantly as the tension goes up in a high-speed course closer to inline skate which is a background of one's own.

Regarding what the number of female players increased, Yoshida played with Yamamoto who raised the merit of "being able to exchange information" and talked about finishing college entrance exams and wanting to race full next year. About the impression of the course, the inline skaters of the inline skating world champion "I feel that it is 350 meters short, it will end quickly if I do not concentrate." Suzuki players from ice hockey and Yamauchi played both as "technical courses".

When asking each technical person each technical problem, Azuma cited "Two rollers (Cobb) just before the goal". It was a senior athlete who told me that 'stability in the first cob, which is particularly high, is going to be a point', but in the LCQ that was held after the interview it was exactly what he took with his boss and it was close. The second place was spilled from within the hands.


Azabu said that "The sense of stability of the top skater is amazing, I can get it from" withdrawals "that I experienced in many places," he says that he realizes his own experience. However, it seems that the thing that seems to be in a state where missing things are visible as it slides and it seems that what I saw by playing three battles from the Yokohama Games was big.

Meanwhile, Suzuki is a true opposite to Akihito, and a sense of speed stability is okay, but there is a problem with drop-in. It is very interesting that the strengths and weaknesses from the difference between inline skating, ice hockey and the background are exactly opposite, "Suzuki said that" It is the top skater that has both of them. "

Yamauchi said that there is strength of contact due to ice hockey origin. As with Suzuki, I still have problems with drop-in, so I observe the movement of top players and get advice and absorb technology.

Three people talking about Japan national team, "There is the best sense of unity including men and women." Suzuki players and Yasuda players who call the youngest player Yamauchi "Genki-kun". Yamanouchi won the final in the junior final, as he declared as "to ride on the podium in junior" before the two big seniors who are hoping for towing the entire Japanese player as a result of recognizing the high potential. He showed us his third success.


Red Bull Crashed The appearance of the final tournament of Ice Boston 2019 will be live broadcast from 10 am on February 10, 2019 at Japan Time on the following Red Bull TV.

Red Bull Crashed Ice Boston 2019 GIGAZINE is interviewing on site. Since the pattern of the race will be updated from time to time, following the official GIGAZINE Twitter and Facebook can help you access the latest information.