The wage gap also exists between 'married man' and 'everyone else' 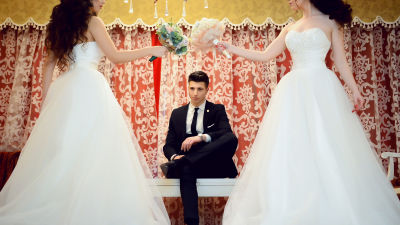 There are cases where it is claimed that wage disparities exist between men and women, and this reason is said to be "a difference in selection" rather than gender discrimination . Meanwhile, an economist reports that there is a wage differential between "married men and others" rather than "men and women".

The gender wage gap is between married men and everyone else - Quartz
https://qz.com/1508500/the-gender-wage-gap-is-between-married-men-and-everyone-else/ 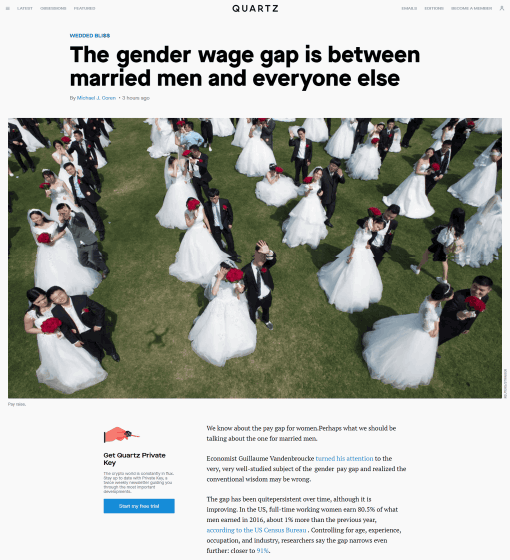 Allegations are often made that "women's social advancement is hampered by wage disparities between men and women and women can not work because of childcare". And by losing a place where women are active, it is said that many merits such as promotion are passed to men's hands.

Actually in the data of 2016, it is shown that women working full-time only earn 80.5% of men working full-time. According to a survey that tracks changes in male and female wages, men and women increase in wages in the same way until around the age of 26, but the disparity thereafter increases, and at the age of 45 men pay $ 75,000 a year 8.3 million yen), while earnings for women are shown to be $ 50,000 (about 5.5 million yen). It has been explained that this is the reason that women leave their jobs for child rearing. But economist Guillaume Vandenbroucke discovered that the wage gap is not gender but correlated with male "marital status". There is little difference in lifetime wages between unmarried men and unmarried women if they are employees with at least a high school graduation qualification. Married women often have children compared to unmarried women, but because there is no disparity between the two, the reason that women's wages are lower than men is not considered to be "child rearing" I will. The data showed that married men earn 90,000 dollars (about 10 million) a year in their mid-40s and wages of "married men" are nearly double those of "other groups". However, from this data, Vandenbroucke shows the possibility that "men get wage when married," and that "men who get high income are more likely to get married".