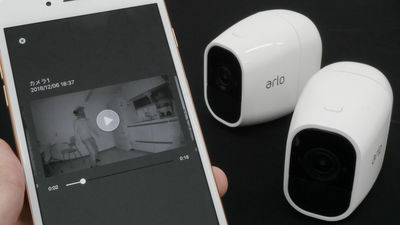 " Arlo Pro 2 " is a full wireless security camera that can detect intruders and repel them with alarms while you are away from home, or watch the house with smartphones even on the go via the Internet . The security camera for the home that is compatible with the cloud, even if it records it all the time, the image quality is coarse and it is not clearly understood, the period that can be saved in the cloud is short, and the expected crime prevention effect can not be obtained. " Arlo Pro 2 " is a fulfilling service that can capture clear images with maximum resolution of 1080p, free up to five cloud storages, and it seemed that full-scale security functions could be easily and easily introduced I tried using it.

"Arlo Pro 2" is a full-fledged security camera that can program various actions, such as recording images and issuing alarm sounds triggered by the motion detection function and voice detection function. From the following movie, you can see that you actually repel the intruder who sneaked into the dark room at midnight using "Arlo pro 2". 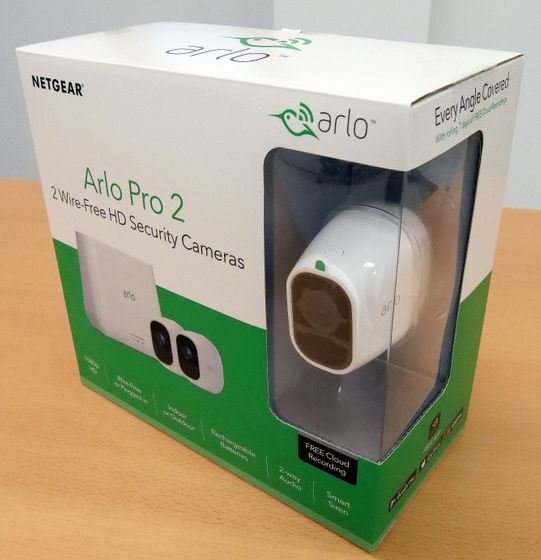 As I opened the box, since there were many contents, I will start looking at the peripheral equipment of the camera. From the left, two cameras, a magnet type wall mount kit, the back is a rechargeable battery from the left, USB power adapter and USB cable. 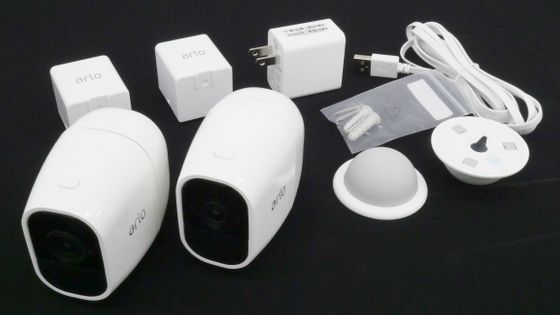 In addition, there are two types of notes for base station and power adapter, LAN cable, setup guide, installation guide, user registration guidelines, safe use, and a seal written as "surveillance camera in operation" It was in. 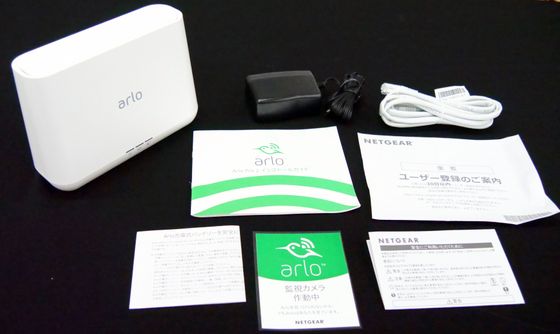 Compared with the iPhone XS Max of the camera body size about 16 cm long side, it looks like this. Since the camera is a compact design with many curved surfaces, it does not impart an extra pressure when used indoors, and does not damage the atmosphere of the room. In other words, if you want to look around intruders from outside and want to make a lot of strangers, it may be a little intimidating. 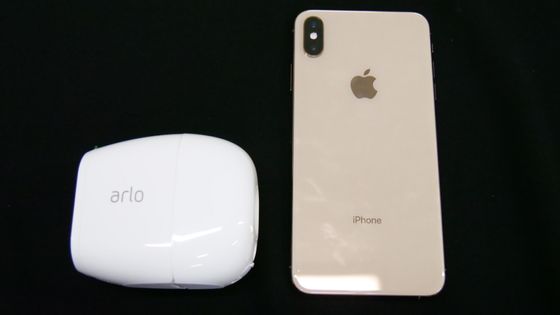 There is a button (left) for wireless connection written as "Sync" on the upper side of the camera and a latch (right) for opening the main body and inserting the battery. 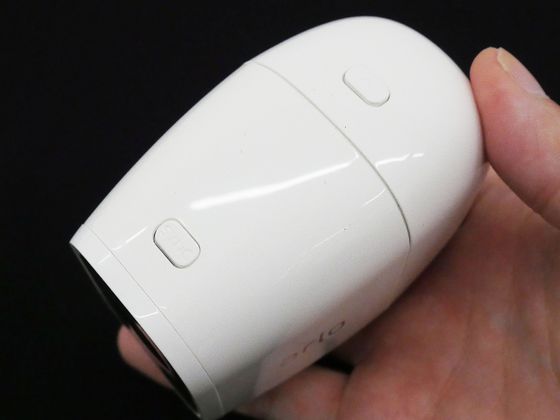 There is a dent for mounting in the mount kit for the wall hanging, a screw hole for attaching an optional screw type mounting kit, and a USB port with a cap on the back. 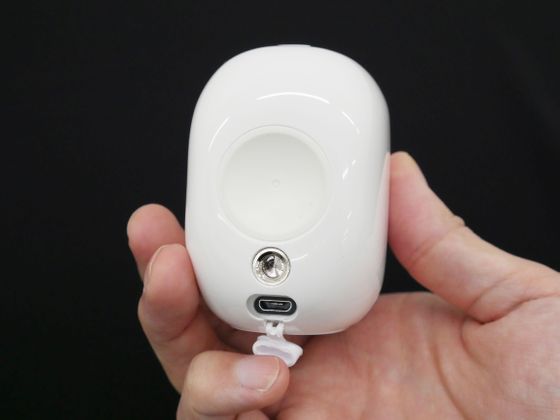 Since the bottom has a slip stopper, you can use it by putting it on the shelf etc as it is. 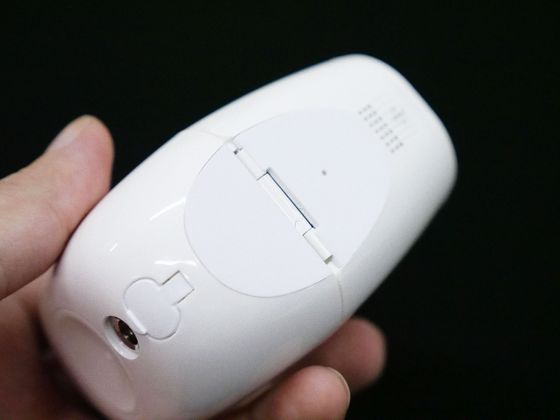 The recess in the back of the body is a magnet, and it attaches to the mount kit which is also a magnet with magnetic force. 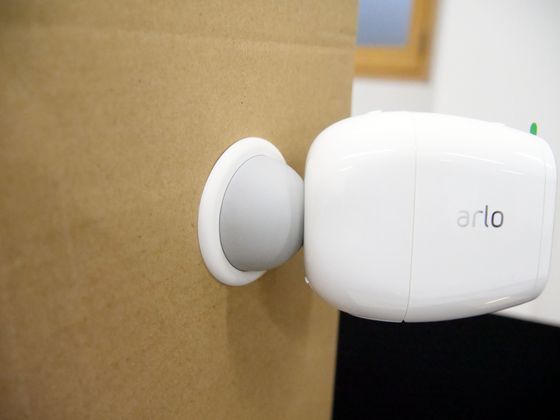 Since each magnet is strong, it can not be detached even if it is slightly shaken, and the spherical surface of the mount kit and the hollow of the camera body stick together, so it can be installed at any angle. 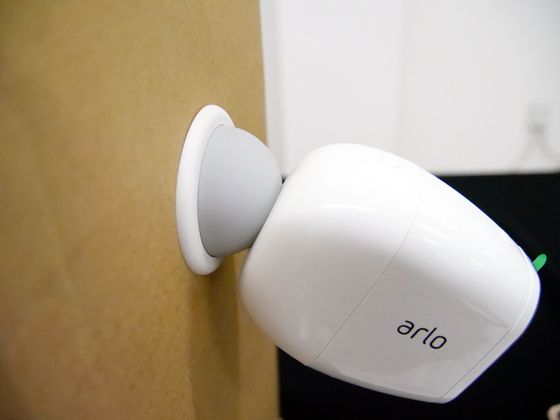 You can also attach it to metal furniture like this. 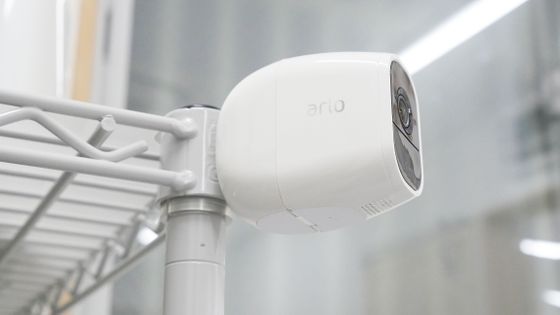 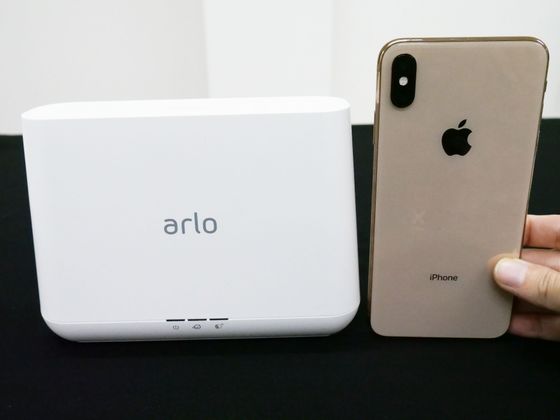 There are two USB ports on the back of the base station and an insertion port for LAN port, power switch and power adapter connection. The USB port is for connecting a storage such as a USB memory and saving the recorded video. The video is automatically saved in the cloud, but if you connect the USB storage, it will be saved there too, so even if you could not connect to the Internet due to a router problem etc., you can leave the video I can do it. 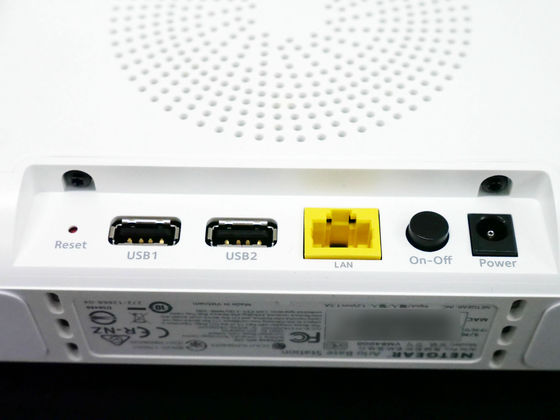 Since the attached seal written as "Surveillance camera is in operation" has a display also on the adhesion surface by double-sided printing, when using it as a security camera, it sticks to the door of the entrance normally and sticks it to the window It can be used. 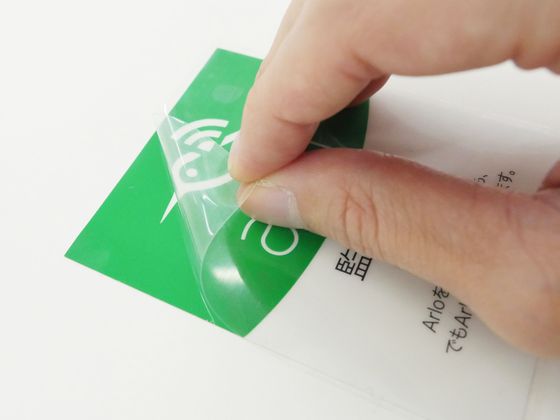 ◆ Installation and application settings - We will prepare for use. First, peel off the lens protection film of the camera body. 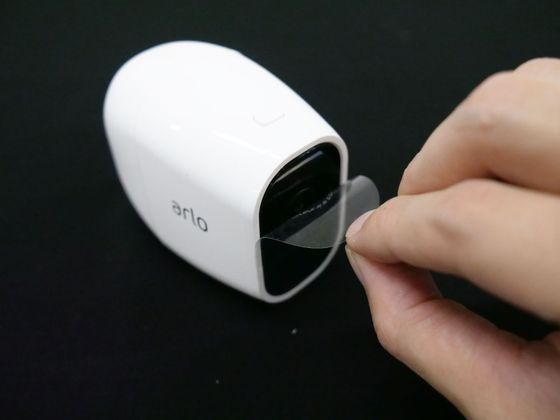 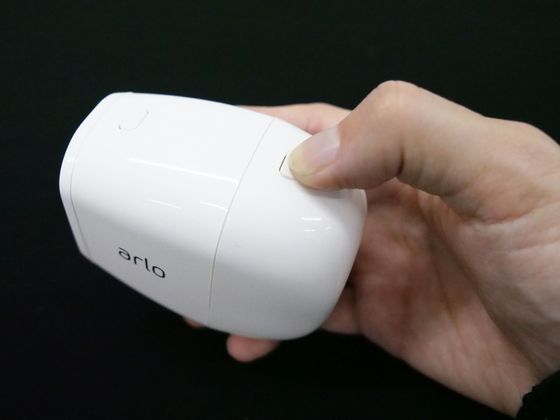 This way the battery holder will come out. 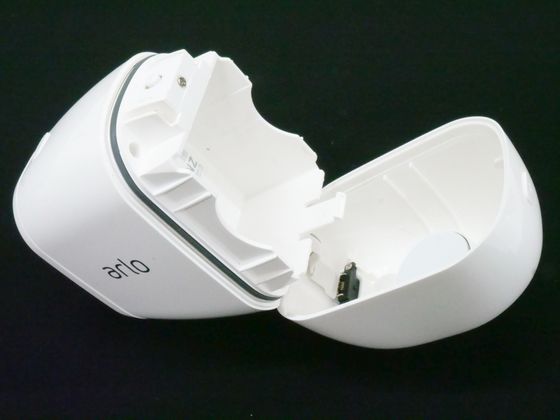 Fit the battery and close the main unit. The battery is charged at the factory, so you can use it as soon as you buy it. 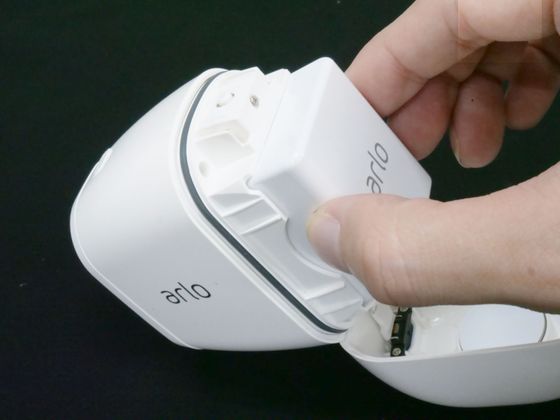 Tap "Open" when installation is completed.

Tap "Permit". After completing the installation, installation is complete, we will prepare the base station next.

First, insert the supplied LAN cable into the back of the base station. 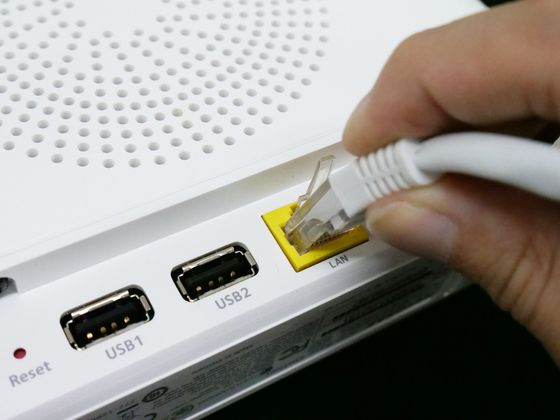 Connect the LAN cable to the router. 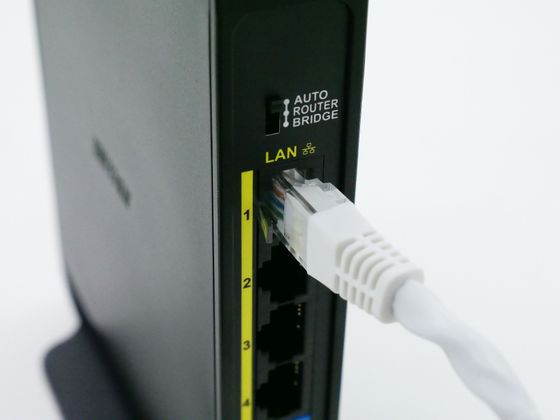 Next, connect the power adapter to the base station ...... 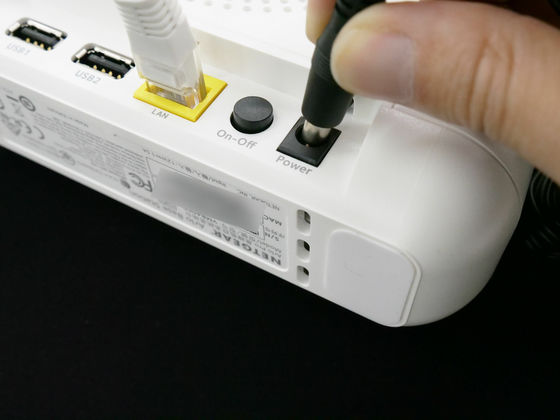 After connecting the power adapter to the power outlet, turn on the power button. 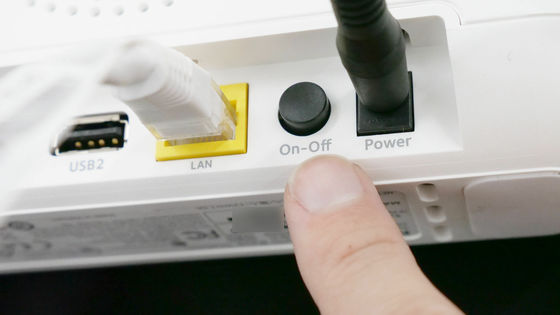 Installation of the base station is complete. It will take 2 to 3 minutes for the base station to turn on and set the next setting, so we will proceed with creating the Arlo account from the application in the meantime. 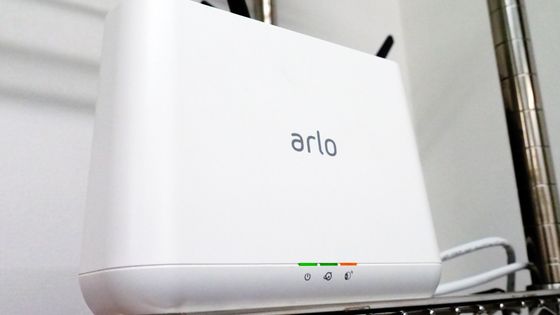 Return to the smartphone and tap "Do you use Arlo for the first time?"

When this screen is displayed, since the registration confirmation email has been sent to the email address you entered earlier, you can register by opening the URL listed there.

Then synchronize the camera body with the base station. There are also ways to connect by pressing the buttons of the base station and camera body, but here we will use the application to make the settings. After creation of the account is over, you will move to the screen below, so swipe and tap "base station". 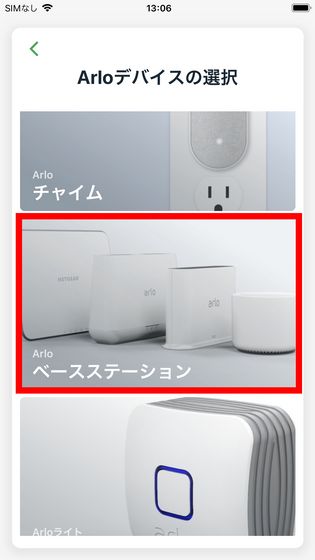 Tap the base station.

Name the base station and tap "Continue".

Name the camera and tap "Continue".

◆ Actually try using <br> <br> In addition to viewing the remaining battery level and connection status of each camera on the "Devices" tab of the application, you can see the live video at any time by pressing the play button in the middle of the thumbnail .

Looking at the following movie, you can see how the camera actually watches the live image on the smartphone.


It was about 6 seconds after the video was projected that the editorial staff put his hand towards the camera. 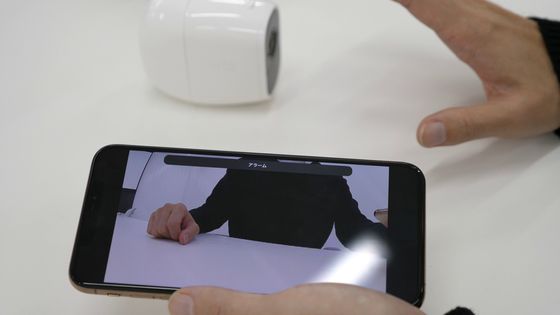 Since the palm appears in the image of the smartphone around 9 seconds, the time lag is about 3 seconds. If the lime lag is 3 seconds at the resolution of this image, it can be said that it is within a practical range. 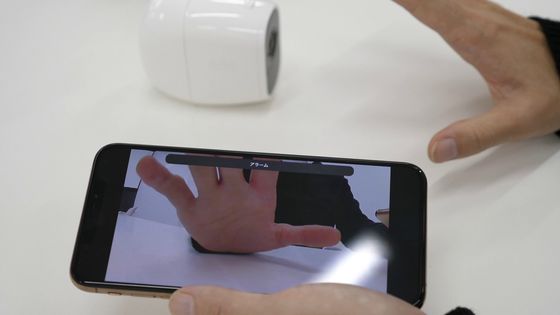 All the videos recorded by the camera are saved in the cloud and can be selected by date and by camera on the "Library" tab. The storage period of the video is 7 days if it is a free basic plan.

Looking at the following movie, you can see that the camera body and the base station are made to cooperate using the mode function of "Arlo Pro 2" to repel the intruder who crept into the dark room at midnight.


In the "Mode" tab, it is possible to program the camera and base station so as to respond automatically if there is movement in the camera image or a sound is generated, as in the above movie I can do it. Tap "Add Mode".

Enter the name of the mode and tap "Next" in the upper right.

Check "When motion is detected" and tap "Next".

Operate the slider, set "sensitivity of motion detection", and tap "Next".

Select "Base Station" and tap "Next".

Tap "Turn base station ON". A little notation is hard to understand, but this means "to turn on the alarm function of the base station".

Set the "Alarm Length" and "Alarm Volume" by operating the slider and tap "Next". Alarm length can be set as short as 60 seconds, maximum 360 seconds. If you turn the volume of the alarm to maximum, a very loud sound will be emitted, so be careful.

In the movie above, the volume was set to the smallest "normal". Even with this size, a warning sound was ringing in the room.

Set the method of alert and tap "Next". "Push notification" will issue a push notification from the application to the smartphone screen when detecting motion. "Alert mail" informs the mail used for account creation earlier that motion was detected, and sends a mail with a link to the recorded video.

I specified the camera's motion detection function as a trigger earlier, but I will add the camera as a device again in order to record the whole story. Tap "Add device".

Select "Record (up to 300 seconds) until the end of the motion event" and tap "Next".

After making the above setting, install the camera in the kitchen. In order to identify the culprit who eats the contents of the refrigerator without permission in the middle of the night, we set the alarm to sound and record when there is movement. Recording will start automatically from where the intruder was caught by the moving object detection function of the camera. The room is in a completely dark state with no lights, but because of nighttime shooting mode, intruders are displayed without problems. 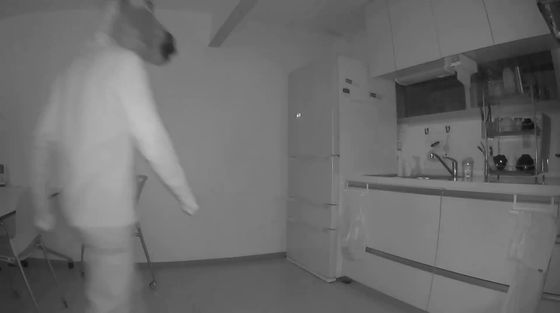 A loud alarm sounded from the base station in cooperation with the camera. The intruder will color the refrigerator as it is, but ... 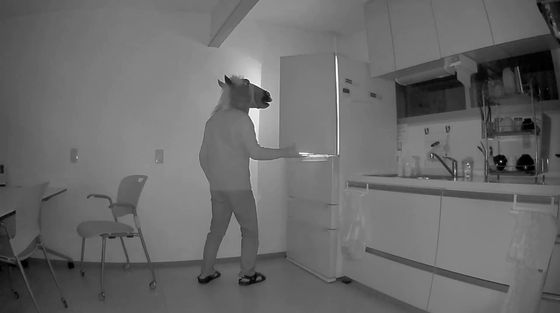 It is supposed to be the trend that it will run away with impatience with an alarm that does not stop ringing ...... 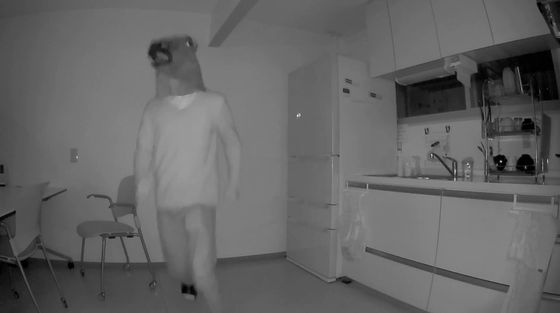 "Arlo Pro 2" is a sophisticated design that is compact and familiar well with interior, it is suitable not only for security cameras but also for watching family and pets who are outdoors while they are out. For example, it is possible to cooperate the motion detection function of the camera with the recording function of another camera and the push notification function of the base station. For example, it is possible to detect the fact that someone visited by a camera installed at the front door, It is also possible to use such as notifying the smartphone and checking the safety of the child keeping an answering machine in the living room. Of course (PDF file) Since it has IP65 compliant dustproof and waterproof performance, it can also be used as a security camera outdoors. When installing it outdoors, it may fall off if it is installed with a magnet, or it may be taken out by taking it out, so it is more secure to fix it on a wall etc. with a mounting kit of an optional screw type.

The feature that the support of the cloud function is substantial is also featured. Since there are up to five cameras that can be connected simultaneously in the free Basic Plan, and seven days of cloud storage of images, if this is how ordinary homes are used sufficient. In addition, if you need to save more clouds or longer, you need to store up to 10 cameras and 30 days for cloud storage Premier plan with 1190 yen / month (excluding tax) and up to 20 cameras · Save cloud There is also an Elite plan of 60 days and a monthly charge of 1790 yen (tax not included).