Amazon is personalizing the US Postal Service, employees talk about the current situation that about 80% of deliveries are Amazon's luggage 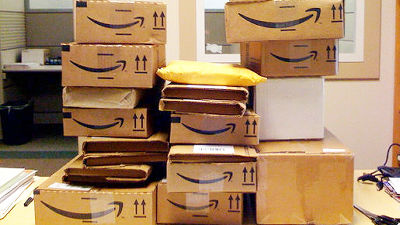 In 2017, Amazon announced that it had shipped about 5 billion items, but most of the shipments in the United States are handled by the United States Postal Service (USPS). USPS has been in deficit since 2000 due to the spread of e-mail, and since it has not been receiving financial support from the country, Amazon's delivery contract has become a major source of revenue, but this makes employees harsh I am forced to work.

Confessions of a US Postal Worker: “We deliver Amazon packages until we drop dead.”
https://medium.com/s/powertrip/confessions-of-aus-postal-worker-we-deliver-amazon-packages-until-we-drop-dead-a6e96f125126

Journalist Brendan O'Connor is talking to USPS staff in New England, USA. According to this employee, the way of working has changed significantly since Amazon signed a contract with USPS in 2013. The staff is working as a part-timer with less than $ 18 an hourly wage (about 2000 yen), but as of 2018 most of what we are shipping is said to be Amazon's luggage, not mail.

As for his daily work, the employee says, “We will arrive at the office at 7:30 in the morning and organize letters and luggage for the first 3-4 hours.” Of course, mail is included in what is shipped at this time, but 75-85% seems to be Amazon's luggage. After that, we will check the directions and deliver them in order to deliver a lot of Amazon packages. The shipping time depends on the day, but it is about 4-6 hours, so the daily working time is about 10 hours.

When Amazon signed a contract with USPS in 2013, it launched a Sunday delivery service called 'Amazon Sunday'. On Sunday, delivery of other mail items will stop, so all deliveries will be Amazon's packages. Every day on the USPS, a computer generates a route for delivery to deliver the package, and the staff receives a paper with the route written on it. This route seems to be 'inefficient' for staff familiar with the city, but the movement of the staff is tracked by GPS, so it is necessary to deliver according to the route. The staff said that if they think that this is more efficient and adopt their own route, they will get into trouble later.

Also, Amazon's handling of baggage is different from other baggage, and if there is a delivery mistake in non-Amazon baggage, it seems to be said `` It is OK tomorrow '', but in the case of Amazon, you must return the route and deliver it exactly It is called strictness.

Since USPS has built a distribution network over the past 30 years, using USPS is attractive in that it does not require the effort and cost of creating a new network. One of the attractions of USPS is that there is no upper limit on working staff.

The interviewed staff said they have worked for 17 days in a row, but there are also people who say they worked continuously for one month on a zero-day bulletin board called USPS Reddit . Especially during the holiday season, there seems to be no holidays.

I don't know if there was such excessive labor in USPS until Amazon appeared. However, some of those who have worked for USPS for many years say that it used to be like this.

It is unclear what the above-mentioned remarks mean `` like this '', but in addition to changes in working hours such as shipping on Sunday, GPS tracking and `` unsafe '' methods are incorporated in USPS The staff is telling us that it has become possible. For example, the delivery route is strictly determined, so the delivery person drives the truck while checking the paper route. However, accidents can occur as a result. When a colleague of an interviewee employee had an accident, the next day, safety was explained as `` Do not check emails and routes while driving '', but it is impossible That's it. Despite the fact that the system enforces a strict way of working, there is a problem that if the problem occurs, it will be the responsibility of the staff. Even when heat stroke is regarded as a problem, although it is instructed by mouth to “take water well and take a rest”, on the other hand, “fast delivery” is required, so the staff cannot actually take a rest.

In response to the question “How do you think you can solve the problem?”, The interviewee staff prefaced that it was a “difficult question” and that “the lack of personnel” and “the idea of“ consumer demand ”” were the problems. Pointed out. The staff said that they seem to work for Amazon because of the presence of Amazon Sundays. On the other hand, the current situation is that if the USPS is dissatisfied with the Amazon, the USPS will need help. Officials say the USPS will not have to rely on Amazon if the US government allocates 0.0001% of the budget for the military to USPS. Amazon has transformed the public sector into a private one, which has exhausted many employees. The USPS staff will be able to work humanely with the budget from the country, even if it is insignificant for the military.