What is dissatisfaction with the company that software developers feel? 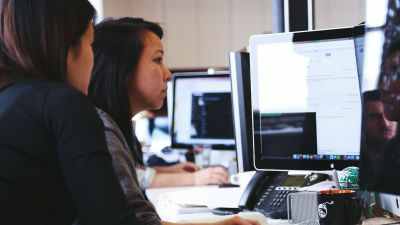 A decade since the financial crisis " Lehman shock " that occurred in 2008, many companies are recovering from capital shortage. As of 2018, it is said that "there are engineers lacking in the world economy", and many companies have been trying to adopt software engineers with high abilities. However, Stripe, which operates an online payment service, and Harris Poll , a research company, conducted research on thousands of executives and developers of companies in the United States, the UK, France, Germany and Singapore " It is clear that people have some dissatisfaction with the company "and point out that there is a difference in recognition among companies and developers.

This graph shows the answer when I asked the management of the company, "How much of the following eight factors are influencing the cause that seems to hinder the company's growth now?" It has become one. Looking at this graph, you can see that there is more than 50% of "securing talented people", "regulation", "securing software engineers", "human resources management", "securing capital" and "old IT infrastructure". In addition, "securing talented personnel" is ranked first, and "securing of software engineers" ranks third, both of which are higher, and more than half of companies responding to questions have secured talent. After the seventh place, "market adaptation" and "immigration response" were raised. 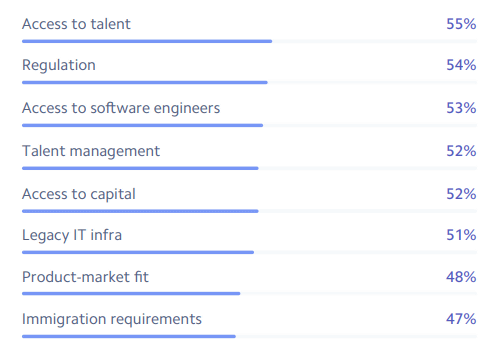 Below is the answer to the question that management says "How much of the following eight threats are threatening to business success?" Looking at this, 66% of companies respond that "security risk" is a threat, and it turns out that many companies feel the most threatening. In addition, "Regulation increase", "collapse of the technology industry" "securing excellent developers" and "intensifying competition with Chinese enterprises" also exceeded 60%, except here again, except for human resources, Part is also included in the risk. In addition, it seemed that the risks from external factors such as "corporate tax", "customs duty" and "withdrawal from EU in the UK" were recognized as risks by nearly 60% of management. 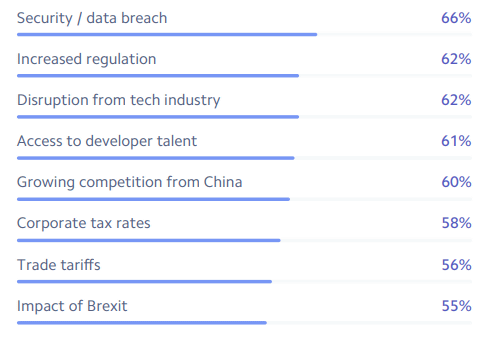 The next question is "How much do developers need to be involved in the following four factors?" Approximately 70% of the executives thought that they wanted to be involved in two points: "to introduce products to the market at an early stage" and "to increase the number of sales". We also know that more than 65% of companies expect "development of services and products differentiated from competitors" and "internal reporting / visualization".

Many companies are rushing to "securing developers" as described above, but it is clear that many developers spend more than 17 hours a week in program maintenance such as debugging and refactoring, etc. As a result, the amount of opportunity loss is said to be about $ 85 billion annually (about 94 trillion yen). For this reason, it is said that many companies need to take measures to improve the productivity of developers.

On the other hand, when asking developers various questions, the following answers are returned. This graph asked the developer "How many hours a week do you work?", Which is 41.1 hours on average, 39.6 hours in France, which was the lowest in the country by country, about 8 hours a day He said he was working.

In addition, it is said that 13.5 hours is answered to the question "How much time does it take to correspond to the" technical debt "existing in the product that has been released for a while without time?" I know that. Therefore, while working 41.1 hours a week, I can see that it takes about 13.5 hours for the company's technical debt and 3.8 hours for debugging the source code under development. 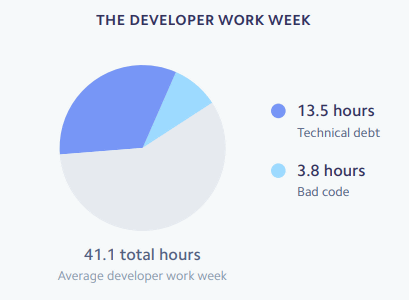 The following graph answers the question "I think that it takes too much time to respond to the modification of the source code?" To the developer. According to this, about 60% of all developers said that they felt "a lot". In addition, it turned out that about 70% of developers who work for companies in Singapore answered "many".

As for the developer, I found that on average the number of points was 68.4 points, "How many points should I score if I evaluate my company's productivity level with 100 full scale points?" For this reason, many developers seem to feel somewhat dissatisfied by companies themselves.

52% of respondents who answered "old system and technical debt" to the question "Which is the factor that is impeding productivity in working as a developer?" 45% replied that "leaders' project and task priorities are bad" and 40% answered "development of proprietary technology".

In addition, 81% of developers responded that "work load is high" to the question "Which of the following is" Why is it that led to a drop in morale in working as a developer? " After that, "change the project priority order like discarding code that we made so far", "hardly given time to correct low quality source code" "it will not take a long time to correspond to the old system "What I should not do" and "what I must deal with the technical debt I do not engage at all". 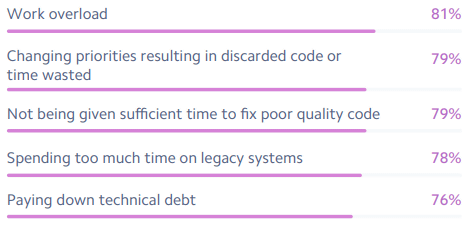 Many corporate management tend to place a high priority on recruitment of developers involved in infrastructure and R & D (research and development), because they feel the threat of competitors a lot. They say that these companies are optimistic that they can provide services using AI, IoT, block chains, etc., only by increasing the number of developers. However, developers working in companies worry that excellent technicians will not gather by just increasing the number.

The following questions asked the management "Are you thinking that companies in any industry do have a big impact on business?" According to this, 44% of the executives cite 'technology companies', and about half of companies are worried that they will be technically superior to other companies. Also, 36% answered "banking / finance", 27% answered "engineering service". The following are "telecommunications company", "manufacturing industry", "retail industry" and so on. 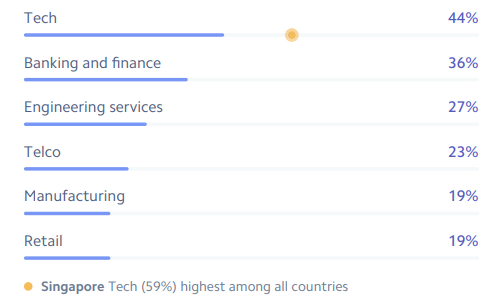 This graph replies to the question that management says, "If you are to list three areas that you plan to increase investment in the next 5 years?" Looking at this, the top ranking is 43% of "software infrastructure and technology", the second place is "R & D", 31% of "employment of excellent technicians", and many management teams are technically It seems that they are thinking about investing. After the fourth place, "marketing", "sales" and "customer service" continue. 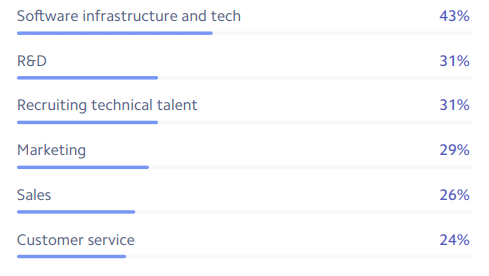 The graph below shows responses to the question that executives say "How much core competence of software development will be needed ten years from now?" Looking at this, 81% of companies think that they should have more core competences.

In the next graph, both the developer and management responded to the question "Which field is currently hot in the company?" According to this, the first place is "AI" answered by 28% of developers and 34% by management. "IoT" " SDS " "API service" is listed after the second place.

"AI" is the top and 41% of developers and executives answered, "What is the topic that seems to have a big impact on the company after 10 years?" Below 2nd place is "IoT", "Virtual Assistant", "Block Chain", "Machine Learning" and so on. 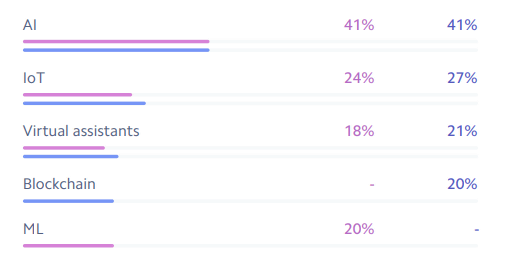 Below is a question asking to the management, "Do you think that the company has enough resources to deal with these trends?" Then, 83% of the executives answered that they are "sufficient or almost complete".

However, when trying the same question as a developer, 77% answered that they were "sufficient or almost complete." It is a smaller proportion than the managerial level, and it seems that developers are looking at the current situation somewhat severely.

In addition, 23% who answered "not sure" "Ask why"? 44% of developers answered "Even if it enters now, it can not keep up with the technology level being a trend" I seemed to think that I missed the timing to enter. Also, 42% of respondents replied that "Current employees do not have enough skills", and it is said that no one can deal with it very much when considering the current situation. 36% answered that "Leader does not try to select state-of-the-art technology", "Company firmly sticks to short-term interests to maintain the line of profits set as long-term target" , It was judged that it is impossible for the company system. In addition, 33% answered "There is no achievement or know-how, so there is no way it is possible to respond," and seems to think that it is difficult to think about the current situation. 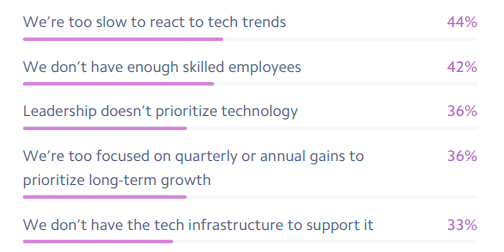