What is the ideal image of the venture capitalist that the startup company desires? 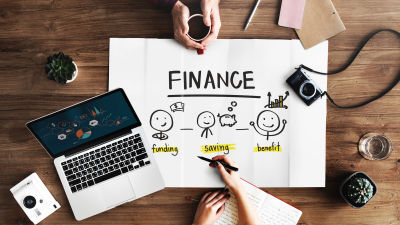 For start-up companies, the funds invested from venture capitalists (VC) etc. and support related to management are very important factors. Investment company'sNewfundMr. Henri Desjaye and Mr. Owen Reynolds of the University of Chicago have 98 members of the VC and the founder of the company whose assets under management are over 30 million dollars (about 3.3 billion yen) to about 2 billion dollars (about 220 billion yen) We gathered 121 people and conducted a questionnaire to clarify the ideal VC that the startup company sought.

The founder founder averaged 5.3 on average, and although VC was indispensable for corporate management, I recognized that it is almost equal in terms of management. On the average, the evaluation of VC is 7.0, which is a 32% higher result than the founder of the company in response that it exerts a great influence on management. 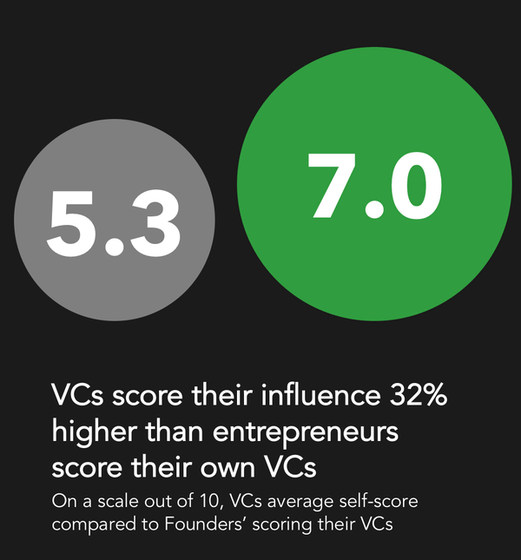 Next, the result of evaluation is different even with the question "How often should we contact VC and company founder?" In this question, "Green at least once a week" is shown in green, "once in a month" is gray, "once in a quarter" is shown in dark gray. Looking at the results, the founder of the company had reached 60% of respondents who said "once a month" and thought that frequent interaction was not necessary. On the other hand, VC accounts for about 60% of respondents who answered "more than once a week", and seems to feel that frequent contact is necessary if you are a founder of the company. Deschee said that "This disparity clearly shows the disappointment degree of the founder of the company," VC seems to have made a significant contribution to the management of the investee company, but the site intervenes so far It seems like a real sound that there is no problem even if it is not done.

◆ Elements Required for VC
Next, I am investigating the necessary elements to conclude a partnership between VC and the company founder. The founder responded "Three important elements for VC", VC "Elements thought to be evaluated by founder", ranked in descending order of number. 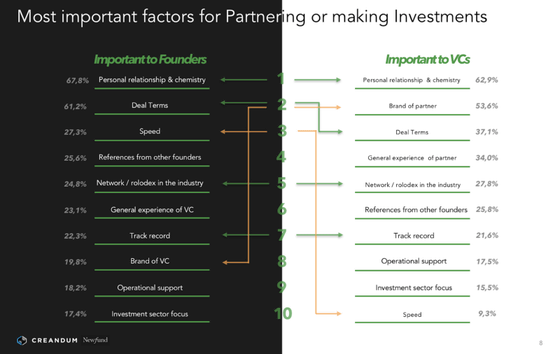 Mr. Deschee's interesting point in this survey is that VC does not have this point of view despite the fact that startup companies have strict time restrictions on financing and are obsessed with "speed" . Therefore, if you aim for a new VC, if you focus on the viewpoint of "speed", you can see that the possibility of concluding a partnership with a better startup company increases.

It is clear that the viewpoint of VC varies from region to region. The following shows the top five elements that the founder of the US and Europe company ask for VC. The 1st and 3rd places have the same result as before, but the second place in the US is "VC experience", the fourth place is "operation support", the fifth place is "VC brand power" You can see that the company founder in the United States emphasizes VC's support capabilities. On the other hand, the founder of the European company seems to have a stronger tendency to seek real interest, "transaction terms" at 2nd place, "case of other company founder" at 4th place, "achievement" at 5th place I will come. 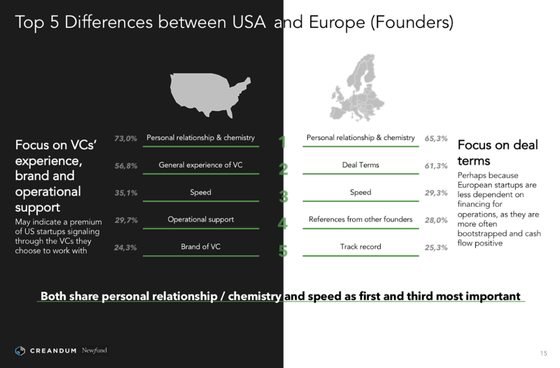 We know that the elements required for VC will also change depending on the funding phase. The following image shows the elements required for VC in the "first funding phase" and "subsequent financing phase". First place and second place have not changed in the previous ranking and change in Europe, but in the first financing phase, "speed" to 3rd place, "VC network" to 4th place, "case example of other company founder" "And those with high relevance to financing are ranked in. However, in the subsequent phases, the third place is "experience of VC", 4th place is "achievement", and 5th is "case of founder of other company", which tends to emphasize the experience value of VC It is obvious.

Details of this material can be found below.