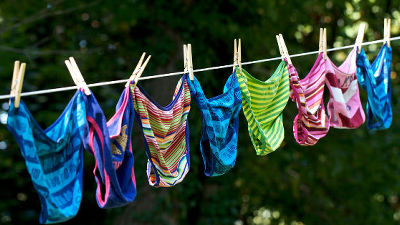 Are Tighty-Whities Bad for a Man's Sperm Count?
https://www.livescience.com/63283-men-underwear-sperm-count.html

This study is one of the largest investigations of the relationship between the type of men's underwear and the number of sperms, between 2000 and 2017, mainly for men in their thirties who visited the Massachusetts General Hospital for infertility treatment 656 I am a person as a subject.

Subjects submitted sperm and blood samples and answered the questionnaire about the type of underwear they normally use. As a result, the trunks were the most worn.

And as a result of counting the number of sperm of the subjects, those who are wearing a trunk and those wearing a perfect underwear such as a brief or a jockey shorts all had standard levels of spermatozoa, It is said that the concentration of sperm produced by one ejaculation was 25% higher and the number of moving sperm was 33% more. This trend did not change even taking into consideration elements such as obesity, momentum, hot bathing frequency, and smoking which the number of sperm is said to be affected. Researchers have also discovered that subjects wearing perfect underwear have a high level of follicle stimulating hormone (FSH) associated with spermatogenesis. This is interpreted as a person wearing a perfect underwear is sent a signal to raise the FSH to the brain because the number of sperm decreases.

Researchers advise people who are looking for ways to make children how to change the type of underwear, but on the other hand, as evidenced by this research alone, there are many other scientific evidence There are some ways to deal with it. " Dr. Michael Eisenberg of Stanford University School of Medicine does not advise the patient to wear a specific undergarment, "I always explain to patients that" Please select the underwear that feels the most comfortable " If the patient feels "tightening is strong" or "hot," other kinds of underwear will make sense. " In 2016, Dr. Eisenberg issued a research result that "the time it takes for a couple to become pregnant, no matter what kind of undergarments a man is wearing" has been published as a basis for changing underwear alone I see it is inadequate.