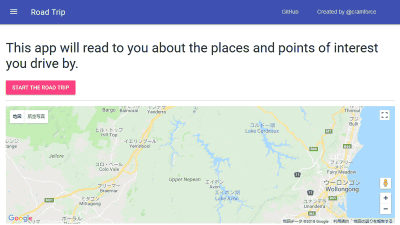 When driving on a car or while traveling by bus or train, suddenly the thought of "What kind of place is this passing through? What kind of city is it?" there is. In such a case, if you launch a browser such as a smartphone, it will search the information on the current location with Wikipedia and read out by voice is " Road Trip ".

This app reads Wikipedia to teach you about the city you are in - The Verge
https://www.theverge.com/2018/7/9/17549668/app-wikipedia-location-facts

Road Trip is a web application developed by Google employee Malte Ubl . Ubl who led the technical department of Google's Accelerated Mobile Pages (AMP) searches for items in Wikipedia based on the location information of the place where the user is now, and realizes as a web application the function of reading out by artificial voice Did.

Ubl says she likes going to various places by herself driving and he wants to know various things about places to visit. Mr. Ubl who thought that the moment just running while holding the steering wheel is a waste is to develop his own wish to make his wish of "I wish there would be an application that tells me about the place I am now" Did. In a tweet informing about the release of Road Trip "After a year, I finished a small application that reads through Wikipedia for the place I got through the drive and completed it."


NEW
I want to have this for years, I just built this little app that will read you Wikipedia articles about the places you drive through on a road trip https://t.co/ODDy7UKrgE


Road Trip is developed using Glitch which can be programmed with simple operation. Everyone can use this feature right away if you use a browser that supports location information and artificial speech reading features like Chrome and Firefox.

So I quickly tried Road Trip on my iPhone 's Chrome. When you visit the page of Road Trip, you will see a document and a button saying, "This application will read about the place that you got through Drive and the place you might be interested in" and a button and Google Maps map it was done. Tap the "START THE ROAD TRIP" button ...... 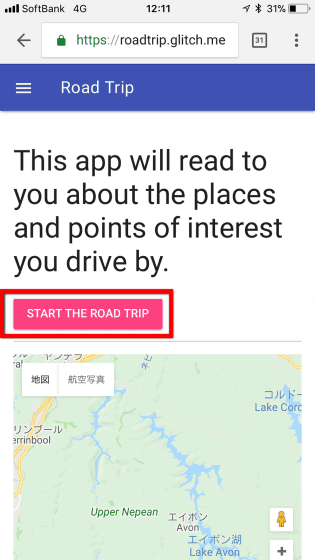 The browser figures out the present location based on the GPS information and the explanation about Ibaraki city where GIGAZINE editing department is located began. Actually, however, it was not Wikipedia's page about Ibaraki , but it was " Wikipedia's page to avoid confusion of the word" Ibaraki "at that time. Also, since Wikipedia is compatible with the English version, reading aloud sound has been played in English as well. 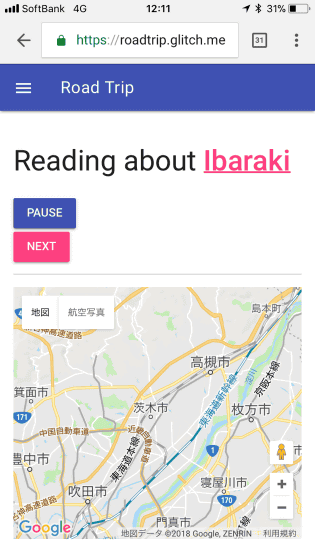 I actually ran into a car and ran to Takatsuki City in the neighboring town. Although there was explanation that the display content of the screen will change automatically, when updating actually it will not be updated. After reloading the page, explanation about Takatsuki city started to be read as follows. After all, although the language was English, it was the content of the English version of Takatsuki 's Wikipedia page from the beginning unlike the time of Ibaraki - shi. On this screen, there are three buttons "PAUSE" button to stop speech temporarily, "SKIP PARAGRAPH" to skip the item you are reading now, and "NEXT ARTICLE" to jump to the neighboring information. Trying "NEXT ARTICLE" ...... 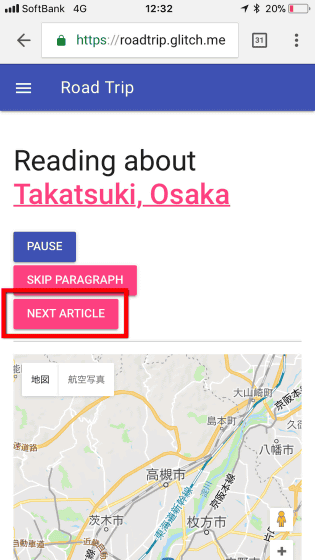 Information on Hirakata City in Takatsuki City and again in Ibaraki City was read aloud. At the time of Ibaraki this time, the content of the page concerning Ibaraki city was properly being read aloud. 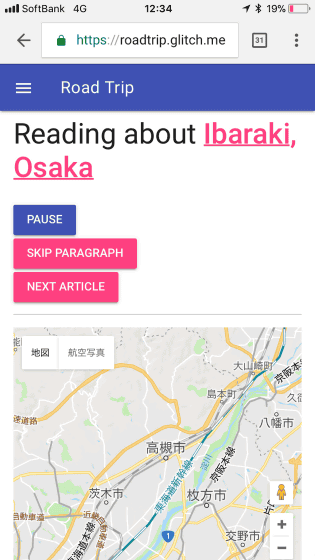 I felt it was a useful feature especially when going to the first place, but it was regrettable that only the English version of Wikipedia is supported. As it is still after the release, it seems that a bug such as mistaking "Cambridge" and "Greenwich" in New York State as the same name in the UK is being fed back to Twitter. In the future I hope to expect improvements on bugs and support for languages ​​other than English, including Japanese.