As the proverb says " All roads lead to Rome ", it was said that ancient Rome is connected with roads from all over the world. A map that investigated whether the times can advance and can get to Rome from various parts of the world by airplane which is one of the modern main transportation networks and can reach New York and Tokyo as well " Flights to Rome "has been released.

"Flights to Rome" is a site created by a team that released " Roads to Rome " which investigated "indeed all roads lead to Rome" in the past. Roads to Rome was investigating whether it was possible to arrive at Rome from landmarks and vessels only from over 480,000 start points around the world.

A map that can check "Are all trails going to Rome?" Released - GIGAZINE And now, Flights to in Rome "All of the air routes is what leads to Rome" has been carried out a similar survey on the theme of. This time we are using an algorithm to check if we can set up a starting point at 712,425 places all over the world, get to the airport in the vicinity overland, and then reach Rome. Expanding around Europe, you can see that there are many routes to Rome's Fiumicino Airport, aka " Leonardo da Vinci International Airport ". As a line facing east from Rome there is a heavy route to Domodedovo Airport of Moscow, Russia and Ataturk International Airport in Turkey and Istanbul. Furthermore, when you expand the area around Rome, you can see that various sizes of small and small lines lead to Rome. 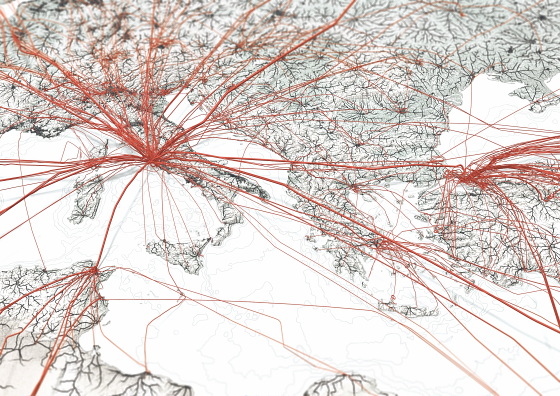 In Flights to Rome it is also possible to see the state of the route leading to New York and Tokyo in addition to Rome. A map centered on New York is like this, with routes leading to Scandinavian countries via Iceland, routes leading to Central Europe via Ireland and the UK, and routes connecting Japan and China through Alaska and Canada over the sky I understand. If you upgrade the continent of North America, you can see that the whole of America and New York are tightly connected. 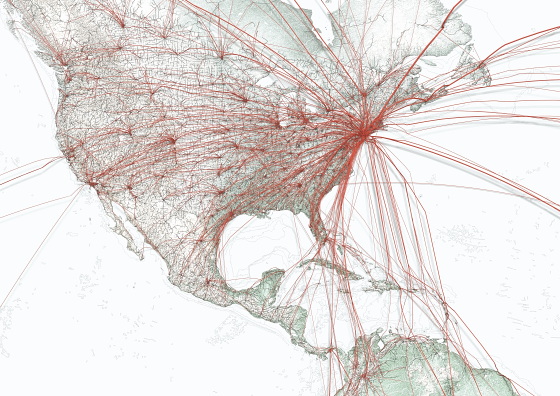 By raising the Alaska part, you can see that a number of routes are open from Ted Stevens Anchorage International Airport to various parts of Alaska. Often these areas are not connected by land, and there are places where airplanes and ships are the only means of transportation. The route map centering around Tokyo is like this. Tokyo is located at the right end of the map and is located on the right side of the map, through the European route via Russia, the China route via Beijing and Shanghai, the North American route entering the United States via Alaska, and the Port Moresby-Jackson International Airport in Papua New Guinea and the spot You can see that there are Oceania routes etc to be. If you are in Tokyo, you can see that there are five main routes like this. From Tokyo to the Chinese side, you can see that a thick line exists from the south to Shanghai, Beijing, and the airport considered to be Harbin Taiping International Airport. In addition, it is also interesting that there are few routes that fly over North Korea. Not only Japanese airlines that do not have diplomatic relations, there are also lines of China and South Korea, but it is also possible that air demand in North Korea is not so large in the first place. In addition, it is also possible to view a 3D map that allows you to upgrade airports in each region and grasp the route three-dimensionally. At the time of writing, it took a long time to load the data, but like the following Haneda Airport, I could see the route of flights departing and arriving at each airport in 3D. 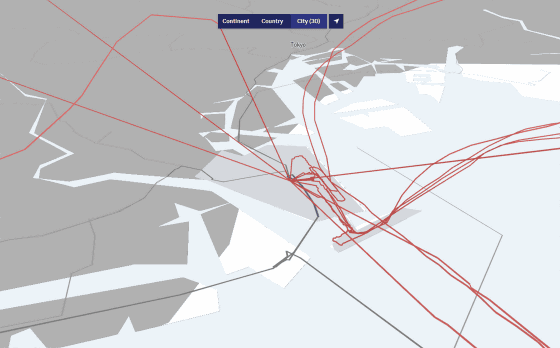