What if there is a cookbook in the world of the Legend of Zelda Breath of the Wild? 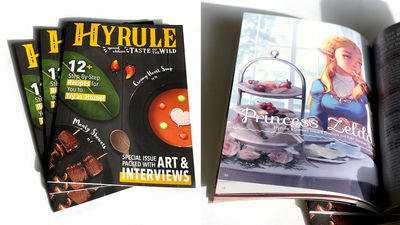 Games released for Nintendo Switch and Wii UThe Legend of Zelda Breath of the WildIn order to recover the damage which the hero's link had received the attack of the enemy, it is necessary to cook and eat the ingredients collected on the field. As much as anyone can not avoid cooking, elements of cooking are incorporated into the game more closely than the legendary series of Zelda, but fascinated by such a Legend of Zelda Breath of the Wild A culinary book that one of the fans who seriously considered how to cook such as cooking appears in the work "HYRULE: Taste of the Wild"Is created.

HYRULE Taste of the Wild Zelda BOTW Breath of the Wild fanzine
https://www.etsy.com/jp/listing/617492437/ In the book, together with the illustration, the recipe devised by a real cooker is posted. I was responsible for creating the recipeBryan ConnorWithDianaIn addition, in addition to Shattered Earth, I was in charge of the illustration etc posted in the book,dariaMr.,FinniMr.,ebbiMr.,WattMr.,a huskMr.

Illustrated recipes are detailed in materials, quantities, and making methods, and completed projections are drawn cute in illustration. Many things that imagined ingredients that appeared during the game are posted, and it seems that the number of recipes is 12 in all. It is also possible to deliciously make dishes that appeared during the game, such as "Honey apple" and "skewer roast meat".

HYRULE: Taste of the Wild not only knows the recipe of the dish that appears in the game, but also creates things such as an interview article to the character art illustration and so on, so it's like a cooking magazine published in a totally hailed world It has become one such book.

HYRULE: Taste of the WildEtsy.comIt is scheduled to be accepted at 2247 yen including tax and will be shipped by June 13.