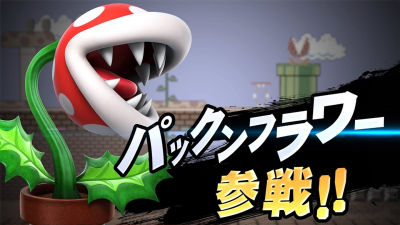 The latest information on the game " Super Smash Bros. Smash Brothers SPECIAL " for the Nintendo Switch was announced at the last direct before the launch . Among them, the last participating fighter announced surprise was the overwhelming reaction of grief abroad overflowing in that "unexpected character" participated in that " Pac-n-Flower " that appeared in the Mario series .

In "Super Smash Bros. Smash Bros. SPECIAL Direct 2018.11.1" broadcast on November 1, 2018, a total of 74 fighters were finally revealed, and detailed announcements were made on the new play "Spirits".


And as a fighter of the 75th battlefield that comes along as an early purchase privilege of "Super Smash Brawl Smash Bros. SPECIAL", the existence of "Pac-n-Flower" has also been revealed. You can check the movie that introduces the participation of Pac-n's flower from the following.


It's a familiar Pac-n-Flower if you've played the Mario series game, but it seems that a considerable shock ran across overseas users as saying that it would not be a fighter to participate as a fighter ....

A person operating Super Mario Brothers blog Supper Mario Broth said on Twitter account, "I do not usually tweet personal opinion etc., but I apologize in advance because I want to tweet this time.Sakurai I would like to express my heartfelt thanks to Mr. Masaru Masaru and Mr. Super Smash Bros. SPECIAL's development team that I added Pac-One flower to the playable fighter, "I thank the development team for participating in Pac- Posted tweets indicating. There are over 13,000 goods left on this tweet and have been retweeted more than 3000 times.


I apologize as I usually do not post a thank you Masahiro Sakurai and the Super Smash Bros. Ultimate team from the bottom of my heart for my inclusion of Piranha Plant as a playable fighter. Regular posting will now resume.


People are making illustration of Pacoon Flower and the last cutting edge at once. In reply to this tweet "There is a full mark, there was also a pleasure to participate in Pac-n-Flower," I am the best in the new entrance of Smash Bra .


"Strangely, I am very excited that none of the leak information related to the smash bra is true.I am very glad about the fact that Nintendo can hold a secret firmly.In addition (the introduction of Super Mario RPG It's not a character such as "Gino" or " Banjo and Kazui's big adventure " but rather made me laugh a lot in making a decision to participate in that packed flower, "while daring among other popular characters, Tweet that respects Nintendo who decided to participate in the flower is also a tweet.


I'm weirdly stoked none of the Smash Bros leaks were true. I'm glad Nintendo can still keep their secrets on lockdown. And I 'm still laughing how cries of "Geno!" And "Banjo-Kazooie!" Were answered with fucking Piranha Plant. My glorious, hungry, armless son.


On the other hand, from Waluisi who has never participated in the Smash Bra series, some people publish illustrations showing "surprising voice" as "joking !!!". Certainly from the Mario series, Waluigi and others are more likely to think that they will "participate in the war" than Pac-n's Flower.


About 4000 goods gathered in the jokes "It's the worst happening happening ever happened to Smavra in Pac-Flower participation," has been retweeted more than 1000 times.


"piranha plant in smash bros." is very "8 year old old learned to lie about who's in smash bros." which is GREAT because kids are by default more imaginative than some bloated beardo crying that it does not have the hero of some C-grade RPG


"It seems to be a day that I must admit Mario's enemy character, Pac-n-Flower, for me today, probably not a Sora but a Pac-n-Flower was made.While shadow , Rex , Isaac and other wonderful characters were left behind, This plant was made.Today we have lost to Pac-n-Flower and we need to go for a long walk for the soul, "his own character does not appear and thoroughly depressed Some people express their appearance with tweets.


Today is the day I have to accept that Piranha Plant ..... a common mario enemy ...... has possibly made it in over Sora.

A plant made it in over Shadow, Rex, Isaac, and other amazing characters.

Today we lost to a Piranha Plant. I am taking the longest walk for my soul. I have to.


this is a piranha plant positivity account. they are valid and brave and i support them


In addition, some people tweet from Pac-n's Flower movie "There are legs in Pac-n's Flower." This tweet has collected about 25,000 goods in just about half a day and has been retweeted over 7000 times.


"I thought that Gino was going to take part in the smash bra, but it is Pac-n's flower that I participate in the game."


One word on the foot of Pac-n's flower "Thank you"


Some people make Sakurai 's collage image which changes from Gino to Pac - Pon flower using " men ' s image to another woman as " to summarize ".


"I like something ironic or anything but the packed flower got enormous," and some people who are pleased to participate in the pack of flower frankly.


Even among Japanese users, opinion is spurring out to various ways to participate in Pac-n's flower.

Opinions that it is impossible to make games that can sell more than 10 million copies in the world unless it has been shaken off ... ...


You are clear at today's broadcast. Who is the best game director of the world? A man who can sell over 10 million copies in the world, a man who chooses to participate in Pac-Flower participation in early purchase benefits. I can not make a smash bra if I am such a human.


There is a lot of positive opinion in Japan, such as "I do not fly away!", Such as the opinion that I want to see the moment when I decided to participate in Pac-n-Flower.


It is pointed out that it reproduces a wide variety of packed flowers of each series ... ...


Originally, there are also kinds that I can walk in Pac-n's Flower, and so on, the knowledge of packing flower likes also explodes.


Pac's Flower I went to the smash briefing session pic.twitter.com/ePbZiWxmE0


Although the competition was decided at a great pace, the illustration depicting an unlucky Pac-n's Flower that is hastened by the " Star of the Lamplight " that flowed last.


Pacific floral pac.twitter.com/ HQ44UF67jj It is empty that it is confirmed that it will be pulled out by the spirit light before it is implemented although it was exciting that the participation was decided


A predictive illustration that Kirby will blow in when it packs flower. What is it that Kirby is looking forward to what transformations it shows.


Pakon Flower is a fighter who can purchase "Super Smash Bros. Smash Bros. SPECIAL" by January 31, 2019 and receive a free point as an early purchase award after receiving the Gold Point. In the direct, I was told that from the release of the game "We are planning to deliver it after a month or two".