Supersonic transportation system proposed by Mr. Ehlon Mask "Hyperloop(Hyper Loop) "that is developing the companyHyperloop Transportation Technologies(HTT) has begun construction of an experimental tube in France. This is the third hyperloop tube in the world and will be the first hyperloop related facility in Europe to be constructed.

HTT, which is progressing the construction of new facilities, is one of companies that advances development of the hyperloop concept alongside "Hyperloop One". The hyper loop is a next generation transportation system in which a person or a car with luggage travels with a supersonic speed of 1,200 km / h using electromagnetic force, in a tube whose air pressure is reduced. The tubes used for that experiment are huge as follows. HTT is proceeding with construction of experimental facilities using this tube in France. Construction is proceeding in two stages, and during 2018 it completes the course with a total length of 320 meters and the experiment is carried out, and in 2019 the facility of 1 km in length will be completed. In addition, vehicles that will run in this area are being manufactured in Spain and will be completed and carried in the summer of 2018. After 2017, news of success in running tests by Hyperloop One has been continuously reported, and the trend of HTT has not been transmitted so much, but at the end HTT also built a full-scale test facility and full-fledged development It is now being told that it is in the stage to proceed. Hyperloop One has already built laboratory facilities in the vicinity of Las Vegas in the US, and in the summer of 2017 it was successfully running at 310 km / h.

Hyperloop One "Hyperloop One" is a full-size vehicle and succeeded in traveling at a speed of 310 km / hour, and released a movie - GIGAZINE 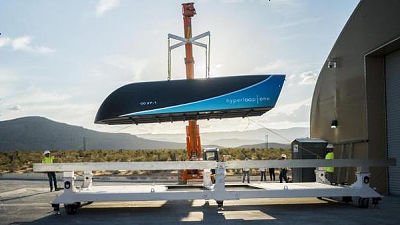 As with Hyperloop One, HTT is expected to be experimenting with facilities in France. You can also check the state of HTT's construction tube in the following movie.