Next-generation display with lower power consumption than LCD, high quality and brightMicroLEDIt is reported that it is developing.

Apple Is Secretly Developing Its Own Screens for the First Time - Bloomberg
https://www.bloomberg.com/news/articles/2018-03-19/apple-is-said-to-develop-displays-to-replace-samsung-screens

Bloomberg reported that Apple is designing its own display using a secret manufacturing facility near the new headquarters just built in California. According to the information Bloomberg got from an anonymous source, Apple is investing heavily in the development of MicroLED displays. The MicroLED display is a display using a light emitting compound different from OLED (organic EL display) used for iPhone X etc. It has the characteristic that it is more compact, brighter and has lower power consumption than OLED.

However, MicroLED is a much more difficult technology to realize than OLED, and although Apple launched another project for MicroLED development about a year ago, the project almost failed. However, since there was technological advances thereafter, it is information that Bloomberg got from Apple once again began to get involved in the development of MicroLED.

Apple has been "End license agreement with Imagination Technologies within 2 years and develop your own GPUThere is a past that has adopted a policy to design and develop original components independently, such as announcing that it is a policy to proprietary GPU development.

In addition, the "Imagination Technologies" of GPU makers that have been abandoned from Apple are selling down. 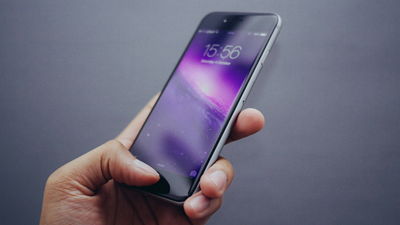 Samsung · Japan Display · Sharp · LG etc. are supplying supplies for Apple mobile terminal at the time of article creation. If Apple will use its proprietary display for its own products, there is the possibility that a wide range of suppliers will be affected, not only to these display suppliers, but also to synaptic that supplies chips for screens Bloomberg points out that there is. Ray Soneira, who runs DisplayMate Technologies, said, "Golden opportunity for Apple to tackle the development of MicroLED technology." "Everyone can purchase liquid crystal or OLED, but Apple owns its own MicroLED We have the potential to be able to do it. "

However, the realization of MicroLED is not easy, and new production equipment is required for mass production. And by the time MicroLED can be mass-produced, we can not deny the possibility that it will be superseded by other technologies. Apple that encountered an insurmountable hurdle could also give up the development of MicroLED. On the other hand, Apple can also minimize risk by outsourcing MicroLED production. The facilities in California are too small to mass-produce displays, but due to Apple's desire to keep partner companies as far away as possible when developing their own technologies, what is being developed at this facility It seems to be Bloomberg.

According to the person who leaked information to Bloomberg, the development project of MicroLED is called code name "T159", and it is said that it is supervised by veteran engineer Lynn Youngs who developed the touch screen for iPhone and iPad about. It is located in California with a capacity of 62,000 square feet (approximately 5,800 square meters), and it is said that it is located about 15 minutes by car from Apple's new office. About 300 engineers are involved in the design and development of MicroLED in this facility.

Also, in the second half of 2017 we have successfully developed MicroLED for Apple Watch, and Apple's first release of "MicroLED loaded device" is expected to be Apple Watch. However, there seems to be a possibility that it will take more than several years for the Apple Watch adopted by MicroLED to be officially released. The prototype of Apple Watch which adopted MicroLED is not fully functional and the screen part is connected to the external computer board, but the MicroLED display is much brighter than the existing OLED, more delicate It seems that color can be controlled.

The MicroLED technology is "It is hard to think that it will be adopted by the iPhone within at least 3 to 5 years." Apple Watch adopting OLED appeared in 2014, considering that "iPhone X" which is the first iPhone adopted OLED was released in 2017, it needs at least three years By becoming, Bloomberg shows the view.