Is the "microchip implant" that embeds the microchip inside the body dangerous? What can you do? Guide summarizing Experiment with life science using my own bodyBio hackingHas become popular,Hack my brain with DIYSome people perform body remodeling to embed Microchip in the body if there are people. Although the "microchip implant" that has become the theme of SF work has become a reality, "Is there really a health risk?" "What is there?" "Metal detection at the airport Does not it catch on a machine? "A guide that answers the anxious questions is released.

◆ What is microchip?
What is called a microchip implant is usually a cylinder type, and in addition to a microchip, a biologically safeEpoxy resin, Lead-freeBorosilicate glassCopper antenna wrapped in etc is included. As of January 2018, microchip implants are used for pets and people, but these do not have batteries or power sources. Therefore, as long as there is no device that can communicate with the magnetic field, the implant will be inactive. 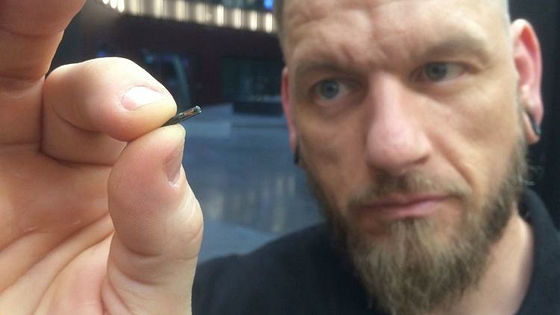 As an attempt to embed such a microchip implant in the human body, a vending machine manufacturer called Three Square Market (32 M) based in Wisconsin, USA, USA, in July 2017, Embedding It has been reported that initiatives began to make it possible to buy snacks even without a credit card or cash. ◆ Health risks
So is the Microchip Implant not dangerous for living things? As you can see from the fact that it is actively used for pets, today's microchip is considered safe for health.

However, when a human embeds a microchip inside the body, there is a danger of infection if it does not take the correct method. EspeciallyMRSAOne type of Staphylococcus has antibodies against many antibiotics and there is a danger of death when infected. However, as risk of infection is reduced by proper treatment by experts, Amal Graafstra, CEO of Dangerous Things, said implantation should be relied upon experts without working on the implant itself, said It was. 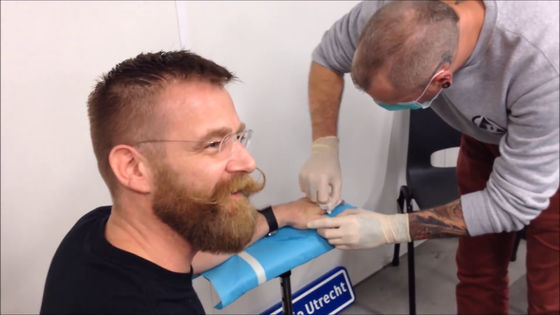 Once the implant is implanted, the affected area swells from one day to several days afterwards, but the implant is wrapped in collagen fibers from 2 weeks to 4 weeks. Although itching and incompatibility may be felt temporarily, it is said that the wound around the implant can heal in less than two years. It seems that after the wound heals it will not feel the presence of the implant under the skin.

The most inexpensive implant sold at Dangerous Things has a built-in tip in a biocompatible glass container and is embedded between the thumb and forefinger. These microchips are compatible with MRI and the metal detector at the airport does not react. Also, unlike chips for animals, chips for humans are not coated with adhesive for tissue slices, so they can be retrieved easily even when changing their mind that "they may want to take them out" as well.

Mr. Graafstra sometimes hears a story saying "It is embedded in chips in the body against will and experiences people's voice, flashlight, various phenomena", but these are mental disorder patients and fraud The master believes that credibility is thin. Hollywood movies sometimes show how to track people using implants, but you can not find pets in actual implants. Today's chips are not equipped with GPS and battery, because the range of communication is limited. If these features are installed in the implant, it will become quite large in size, and it will always be necessary to replace it once every two or three years.

However, in theory, it is not impossible to trace individuals by using implants. Chips can be tracked if an attacker assembles a device that embeds the implant in a human body in a specific area and sends strong induction current enough to activate the chip even from a distance. However, it is necessary to install a leader everywhere in the area, and there are other inexpensive and simple ways to track targets, so it has not been put into practical use.

On the other hand, the risk used for hacking exists. In 2010, British scientist Mark Gasson embeds the virus-infected microchip in his hand and examined whether it could infect external devices with the virus, the experiment was successful. In addition, hacker Seth Wahle has successfully used a vulnerability of NFC chip to open a link to a smartphone and connect it to a computer in a remote environment.

Even if the microchip is used as the key of the house etc., as long as there are easy ways such as "to break the window" and "to make the key", the technique called hacking of the microchip is used as a method of entering the house There is little possibility. However, there is a possibility that someone will plan these attack methods as a business. And at that time, it is easy for people who use microchip personally to target.

Employee ID cards actually using RFID with low safety are still problematic. Because attackers with knowledge and skills can easily replicate RFID and enter the company as employees. In order to prevent such a situation, it is proposed to use RFID cards that use highly secure protocols, and to combine RFID and biometric authentication. In fact, Mr. Graafstra is developing a new microchip using an encrypted platform called "VivoKey" so that Bitcoin can exchange and pay safely. ◆ Do microchip implants penetrate?
Even though microchip was technically established, Graafstra thinks that there are a few people who actually plan to do an implant. Mr. Graafstra took the microchip for the first time in 2005, and as of 2018 when 13 years passed since then, the leader corresponding to the chip was 10 dollars (about 1100 yen), but it is infiltrating not. "Even though technology development is fast, norms and applications can not be that way." "It will not be like a smartphone," Graafstra said.

"Dangerous Things sold"xNTi"The microchip data storage period is 10 years, and the maximum number of write cycles is 100,000 times. However, due to credit card payment data expires in a few years, remittance systems often make certain chips unusable. From this, it is necessary for people who embed Microchip to think about the problem of aging. Microchip implants do not pose a major risk to the human body if properly treated. However, as of 2018, the use of the microchip embedded in the body is mainly "payment", "use as a key", "password authentication" etc. It is not a thing that dramatically changes everyday, It depends on the progress of technology and the change of social norms.