Seagate has announced a revolutionary multi-actuator technology that will allow you to double the data performance of next-generation hard drives in large data centers. It has been developed to reduce the cost per TB while increasing the capacity of the hard disk drive (HDD), and also to improve the performance.

The higher the areal recording density of the HDD, the faster the reading and writing speed is required. So, Seagate developed a new multi-actuator technology with a dedicated magnetic head for each of multiple recording disks. With this, users using data-intensive applications will be able to manage huge volumes of data while enjoying the highest level performance of HDDs.

The actuator is a component that reads and writes data by moving the HDD head over the media surface. Each magnetic head used to read / write data from / to the disk is attached to the tip of the moving actuator arm, but in the present HDD, a single actuator processes all read / write operations in a synchronized series of operations There are also many.

In the first generation of multi-actuator technology, "dual actuator" with two actuators is adopted for HDD. Two actuators operating on one pivot point, each actuator controls half of the drive arm. Half the performance of the HDD while half of the magnetic head of the drive works together as a unit and the other half works independently as separate units to maintain the same capacity as one actuator drive You can do it.

Click the following image to play back the image movie of the dual actuator system.

"By engineering all the elements of HDD technology and taking advantage of the long-standing leadership, Seagate will deliver breakthrough performance solutions within industry standards," said James Bowden, Seagate product strategy director. "Our multi-actuator technology is based on proven technology and is compliant with current standards, so we can plug and play to today's infrastructure."

The multi-actuator technology under development by Seagate is expected to be introduced into products in the near future. 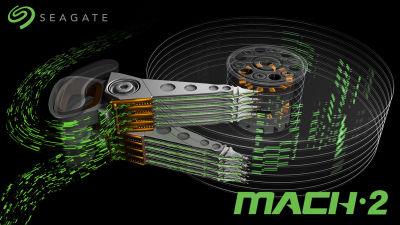