MACH.2 is a multi-actuator technology that was already announced in December 2017. 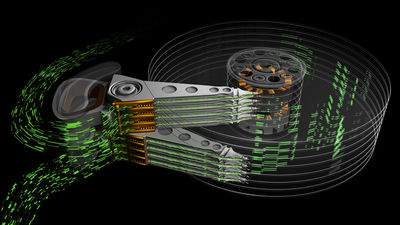 Previously, one actuator was used to read and write the platter with one magnetic head, but in MACH.2 two actuators were responsible for the outer and inner circumference, respectively, so that the reading and writing speed was literally 2 × speed I will. According to Seagate, the throughput reaches 480 MB / s, which is 60% higher at enterprise HDD ratio of 15000 rpm. By parallelizing the data flow, the host computer of the data center can simultaneously request data from the two areas of the drive, so that the IOPS performance of each HDD doubles, so even if a large amount of data is dealt with, data It is appealing that there is a merit that availability does not decrease. The HDD that adopted MACH.2 is provided to some customers, and it is said that the test before commercialization is done.


In addition, Seagate to increase the reliability of HDDHeat assisted magnetic recording (HAMR)We are developing technology. HAMR is a laser thermal assist technology for realizing stable reading and writing of data even when the recording density increases. Seagate has been developing for a long time as a technology to record data while heating the magnetic layer of platter to cope with high density platter to realize large capacity.


According to Seagate, it is expected that the data capacity handled by the data center will continue to increase in an accelerating manner, and accordingly it will require HDDs capable of large capacity and high speed data access. The MACH.2 and HAMR technologies will be applied to HDDs for enterprises in the near future that will realize the capacity and performance of the new generation.