Jetliner with Gundam Themed Paintings debut from July 16 on ANA, with specially-colored Gun-Pla As a part of ANA X GUNDAM SKY PROJECT, celebration for the 30th Anniversary of Gun-pla, All Nippon Airways(ANA) is to fly domestic jetliners with custom Gundam paintings from July 16 to the end of March, 2011.

For the project, they modified one of their Boeing 777-300 with custom paintings. "ANA X GUNDAM" logo and head of the Gundam on the left side and life-size Gundam mounted in the hanger of White Base on the right side, 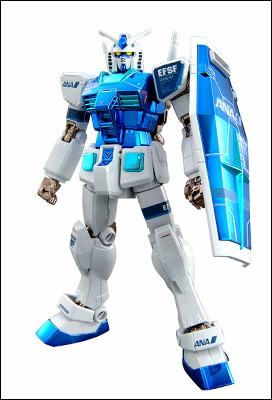