FINAL FANTASY XIII Trial Version came out yesterday in Japan, bundled with FINAL FANTASY VII ADVENT CHILDREN COMPLETE(FF7ACC). At our local Yodobashi Camera, dozens of people were queueing from early in the morning.

Anyway, we got our hands on the demo, gave it a several go, so here's our review of "FINAL FANTASY XIII Trial Version", with pics and videos!
The official website was updated on April 16th. Click "BATTLE" and you can see the system of battle sequences.

Tutorial of the basic operation. The final product must differ quite a bit from the demo, so please remember our following review is strictly for the "Trial Version". 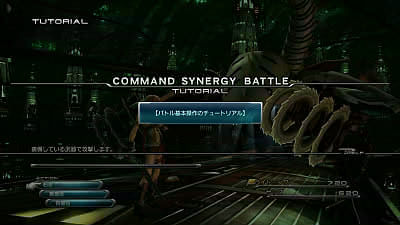 During the battle, the gauge in lower left side of the screen gets filled over time. 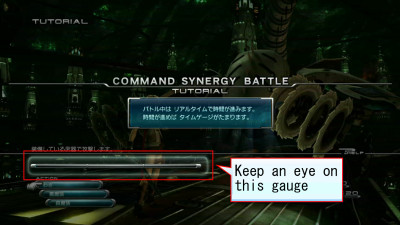 The gauge is divided to three sections, what action you can take depends on how many part of the gauge is filled. 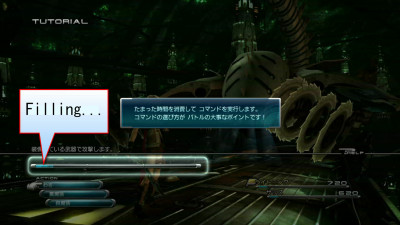 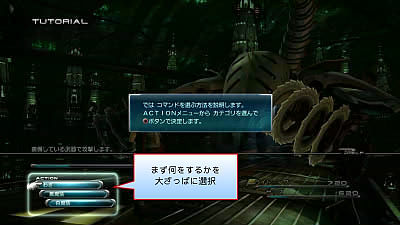 Since "White Magic" is healing magic and your company recover their strength automatically and instantly in this demo version, you rarely get the chance to use it. We chose "Combat" this time. 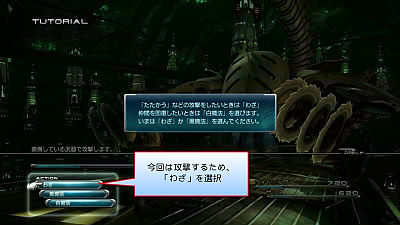 Then you decide your target. 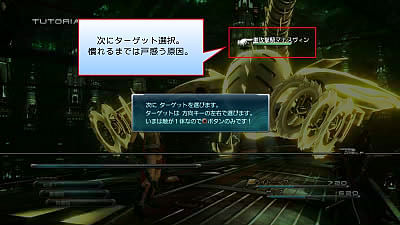 Next, choose your move. 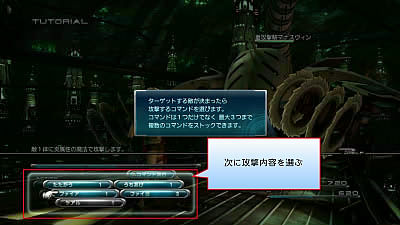 The number on the right of each action tells you how many sections of the gauge you'll need. If it's "3", you'll use up all three. 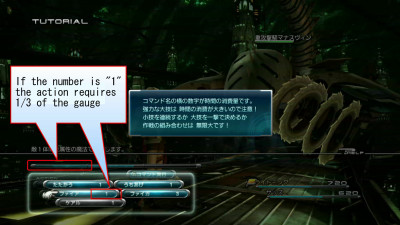 You can appoint up to three actions in advance. The gauge won't be used untill the action takes place, so you can change your mind and cancel it during the battle. We chose "Fire" for the first move. 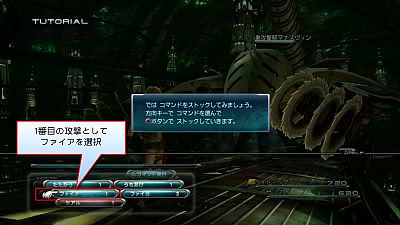 The action you chose will be indicated above the gauge. The gauge is filled enough to "Fire" right now, but it will be more effective to wait until the whole three gauge is full and attack one enemy with consecutive moves, which will result in "Chain Bonus" and cause more damage. 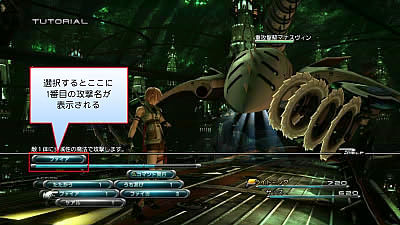 Chose "Combat" for the second move. 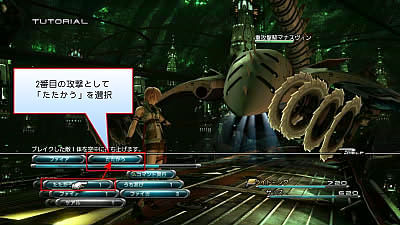 "Shoot up" for the third move and press "Execute Command". This combo uses the whole three sections of the gauge so you have to wait until the gauge gets filled. 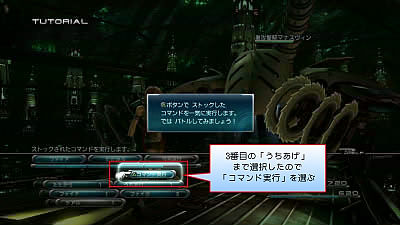 You can execute command when the gauge is full. 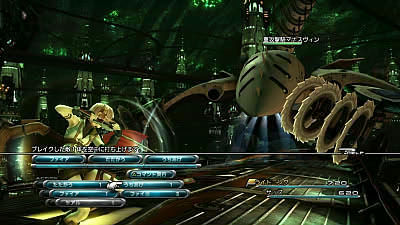 Here's a video of the practice battle in the tutorial. When your enemy gets in the state of "Break" and glow orange, you can "Shoot Up" to literally shoot him up in the air. Attack while your enemy's still in the air to hurt him badly.


The lightning was pretty impressive for a practice battle. 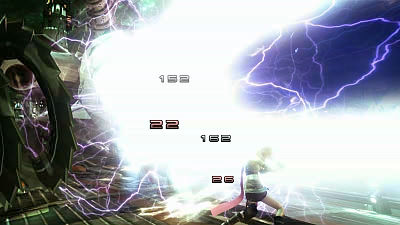 Some enemy don't get lifted even if you "Shoot Up", but some gets blown up to the air quite easilly despite looking so heavy. Addictive once you get the knack of it.


You can move the camera by right stick on the controller. 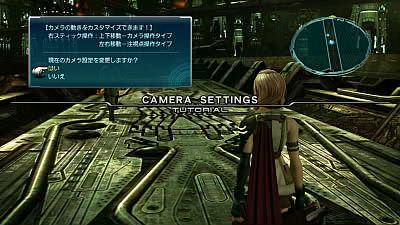 Looking around the scenery.


Treasure box. All treasure boxes contain Gill(money) but there's no opportunity to use money in this demo. 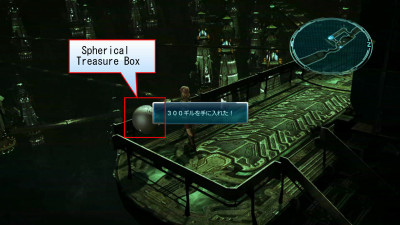 You can jump when you come across a shining spot while walking around. 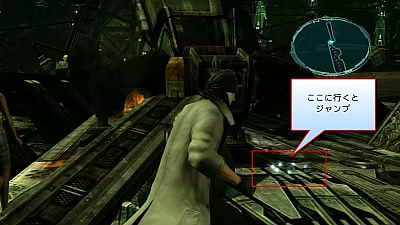 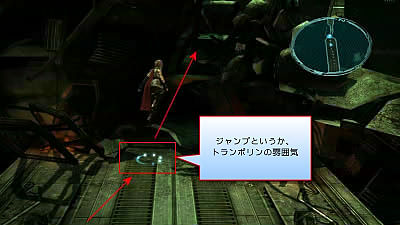 The battles begin when you encounter the enemies while strolling about. In the demo, there's no difference between encountering an enemy head-on and sneaking up from behind, but in the final product you'll be able to take advantage of surprise attack. 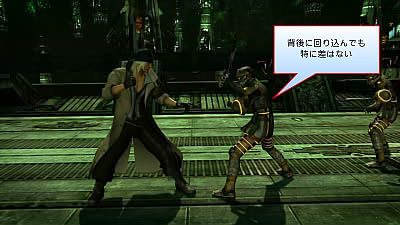 The screen after a battle. No victorious fanfare in the demo. 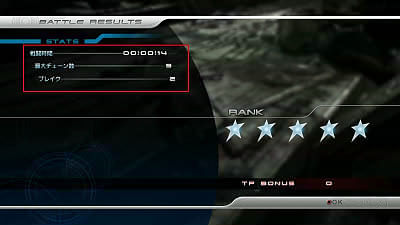 One of our battles ranked as five-stars. The time you put enemy in to "Break" and the number of consecutive attacks are evaluated.


The battle system will be much improved in the final product, and you'll be able to give instructions to the support characters who move of their own accord in the demo. The challenge level of the demo is set easy, focused to give exhilaration. 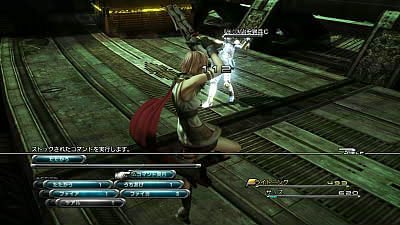 The navigator on top right is quite useful, with footprints telling you which way you came from. 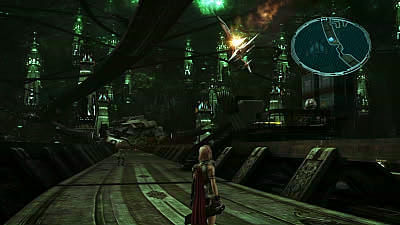 To move swiftly you might get focused to the navigator, but sometimes you can see your next destination in the distance. 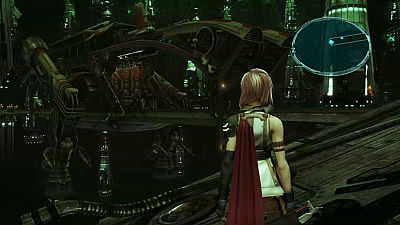 The working of each magic spells were visualized in detail. In this case you can see the ice shattering and bouncing for "Blizzaga".


Hopefully, the surface of battle scenes will be improved in the final product. Deciding your next move according to the state of your enemy, you'll end up looking back and forth between the top-right and bottom-left of the screen like a tennis match, and the horizontal line for "Help" gets in the way. The gauge of your character's strength escapes from the view. From here on are the impressions we got after playing it on and on, in to the wee small hours. We tried not to be too hard on it since it's only a demo, yet the demo costing 1000 yen, we got a bit critical.

-The frequent switching of viewpoint makes you dizzy.

-It's hard to grasp where things are located on the screen.

-It'll be fun if you'll be able to hop wherever you want, there are so many objects in the field to jump over.

-Where's the fun of exploring and taking the wrong turn? There's no opportunity to get lost if the signs keep kindly informing us to "Climb Here" and suchlike.

-Really, it's too kind to the players.

-The navigator map was useful.

-The animations are beautiful.

-They say Snow is going to get weapon, but he's fun to play barefisted.

-Why do we have to time our moves, watching out the movements of our sidekicks?

-Difficult to keep track of your HP during the battle, so you may die easily were it not for the sidekicks healing your character.

The graphics and sound tracks were good enough, meeting the Final Fantasy standard. Loading time wasn't too long, it'll start smoothly so long as you don't try to skip the introduction video or anything. With popular voice actress Maaya Sakamoto as Lightning(the female lead) and Daisuke Ono as Snow, fans might have liked to hear more of their voices during the battles. Explanatory leaflet that came with the demo was of little help, we had to figure out some details of gameplay on the web.

All in all, 1000 yen for a demo seems quite expensive. Another long wait until the game comes out.