A factory in Higashi-Osaka produced 'Naniwa Mjolnir' like a saw hammer, and I have seen the forging scenery. 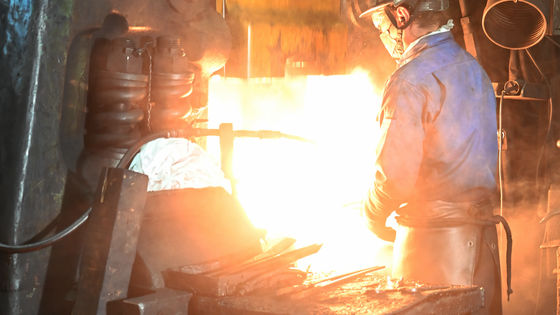 Thor, the god of thunder who left the earth with the Guardians of the Galaxy after losing many friends in a fierce battle with

Thanos , the 'worst and worst villain' who halved the life of the entire universe, this time Gore of 'God killing' The movie ' Thor: Love and Thunder ' will be released on July 8, 2022 (Friday).

In this work, Thor's ex-girlfriend Jane appears as 'Mighty Thor', which has more power than Thor, but with the motif of its weapon, Mjolnir, the hammer maker in Higashi Osaka is a fan-made 'Naniwa Mjolnir'. The project to produce '' was secretly underway. I followed the situation of how the completed 'Naniwa Mjolnir' was made.

A movie that follows a series of flows in one cut is like this. I put the whole digest at the beginning.


O.H.INDUS, which has the largest market share in industrial hammers, is in charge of forging. According to Mr. Shimizu Shimizu, Managing Director of O.H.INDUS, there was a desire to 'challenge a job that can be done while having fun' in line with the company's 75th anniversary, and as a hero-like project that I originally liked, I imagined Thor's Mjolnir. It seems that it was decided to actually produce the 'Naniwa Mjolnir'. Since I have already made some, the furnace etc. are in a state of being ready. First, heat the material to about 1200 degrees in the rotary furnace on the right hand side. The inside is shining bright red. When you open the lid, a tremendous amount of heat comes in, but according to the person in charge, 'I get used to it'. Looking up at the furnace, red light is leaking through the gap. With an air stamp hammer, it will be molded into a large rectangular parallelepiped. Since the material has different stickiness depending on the timing, the strength is finely adjusted with the pedal of the foot. It will be carried by a conveyor to the next process. 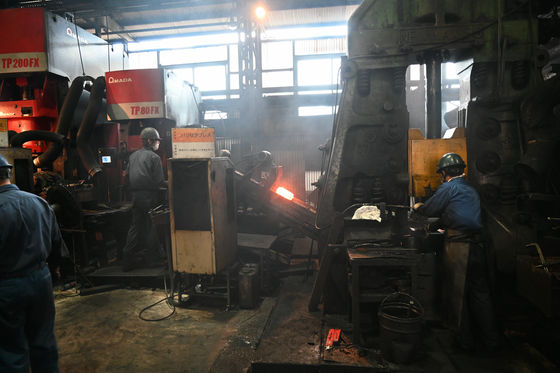 Use a burr removal press to remove burrs from the forged head. The mountain of Bali that was pulled out. You can see that the way the burrs spread is also different, and each one has its own individuality. Furthermore, in the process of vertical push and horizontal push press, holes in the handle are machined and burrs are erased. The rest of the removed handle hole. After that, after the quenching process, the finished product looks like this. Genuine Mjolnir is not a practical shape because it is a weapon of God that can only be used by selected people, but O.H.INDUS is a hammer maker, so we have arranged it into a shape that is supposed to be practical. It weighs about 13 kg. Detailed inspections were carried out because the size and weight changed slightly depending on the temperature at the time of forging and the degree of cooling. 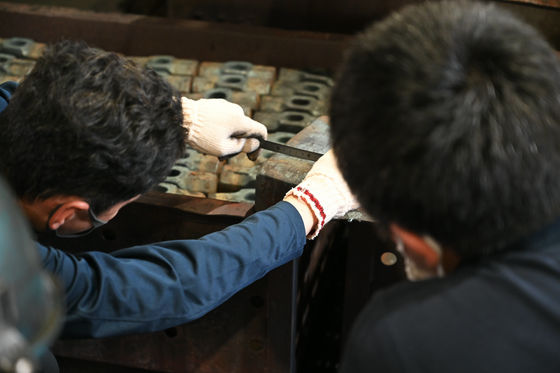 The 'Naniwa Mjolnir' head made this time and the handle that will be attached later. Below is a Mjolnir-like pattern on the head of a conventional sledgehammer from OH Industrial. According to Mr. Takahiro Miyoshi, the factory manager of the manufacturing department who was in charge of forging, it was difficult at first, but he got used to making two or three pieces. He told me that it was a good finish and I was relieved. After that, in order to further finish 'Naniwa Mjolnir', pattern carving and painting were done with Taisei Monac .