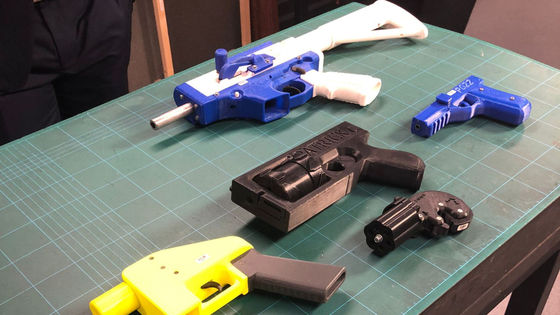 The technology for making guns with 3D printers has advanced rapidly in recent years, and it has been pointed out by overseas media Sky News that individuals can access various firearms.

According to Sky News, there are a variety of firearms on the internet, including printable semi-automatic rifles, carbines, pistols, and what are the people who create and share designs for these firearms on Twitter, YouTube, and Instagram? He has a thousand followers.

Anyone who wants gun data can get the data for free by doing a Google search based on the comments posted on YouTube etc., accessing the website and clicking the download button. You can do it.

Such 3D-printable guns have developed in the United States, where possession of guns is legal, and communities have been built. Gun enthusiasts use social media to guide them to find downloadable files, assembly manuals, and equipment lists.

However, the easy availability of 3D-printed gun data does not mean that it is easy to create. Since 3D printed guns require metal parts such as springs and pins, they cannot be made by a simple manufacturing process. However, the parts themselves are easily available in the online market.

Also, in countries with strict gun control, the act of manufacturing may come into contact with the law, and according to King's College London's Rajan Basra, in the UK, where gun control is particularly strict, each manufacturing process is a law enforcement agency. There is a possibility that it will intervene. Since 2019, a total of six cases involving 3D printed guns have been prosecuted in the United Kingdom, and the Metropolitan Police Department considers these as wonders and warns the public. 3D printed guns are evolving, such as being stronger than before, and experts are talking about the dangers of creating a gun like the

However, the number of 3D-printed guns seized is not large, and it is extremely small compared to the conventional firearms that seized more than 500 guns in 2021 alone. However, the Metropolitan Police Department said, 'One of the challenges of cracking down on 3D printed guns is to be able to make them inconspicuous,' and said they are working to stop the guns before they hit the market.

The platform used to direct people to these firearm files is actively trying to close accounts that are deemed to be in violation of the platform's policy regarding firearms. Instagram and YouTube have deleted accounts that violated the policy, and Twitter has also permanently suspended some accounts for violating 'Twitter rules regarding illegal or regulated products and services.' Those who design and make gun files available say, 'Our only concern is the freedom of humans to protect themselves. In our group, to despise hateful speeches and others. There is a rule that content, especially race-based, is unacceptable. Designers only share their work and promote the cause of human autonomy. ' I objected to removing some of them.