Mozilla, which develops Firefox for web browsers, released Firefox version '98.0.1' on March 14, 2022, and searched for it from major Russian IT company '

Yandex ' and email service ' Mail.ru '. It was revealed that the function to be used was removed. 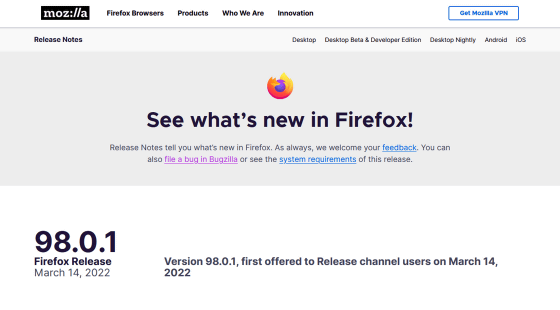 As Russia advances its military invasion of Ukraine, governments and private companies are taking various measures against Russia. Apple , Microsoft , Netflix and others have already stopped selling and servicing products in Russia, Samsung has also stopped shipping products to Russia, and YouTube is blocking the YouTube channel of Russian state media worldwide . ..

Meanwhile, Mozilla released in the release notes for Firefox version '98.0.1' released on March 14, 2022, 'Yandex and Mail.ru have been removed from the optional search providers in Firefox's drop-down search menu. I did. '

Firefox has a function that allows you to select any search engine from the address bar to search, but this fix removes Yandex and Mail.ru from the search options.

Also, if you are using Firefox customized for Yandex or Mail.ru, updating to '98.0.1' will remove customization settings such as add-ons and default bookmarks, and it will be the default setting provided by Mozilla. ..

Users who have been using Yandex as an email provider for several years claim that Yandex's products are pretty good and that the search engine is technically second only to Google. He said he had to buy a new domain and ProtonMail as an alternative because the sanctions on Russia were no longer available as before.

'Does it make sense to boycott companies that have not expressed their support for the Russian government?' '

Yandex is spreading Russian propaganda.' 'Sanctions on private companies will hurt the country's economy. The reason was mentioned.

The user who wrote 'It's a pity that Yandex has received this measure ...' said that Yandex's translation quality was superior to Google, and Yandex that can communicate in his native language was useful. While you can still copy and paste the results of the Yandex translation, Firefox's decision raises concerns that it may be a sign that even more restrictions will be imposed.