Crude oil futures prices hit record highs since 2008, due to Russia's invasion of Ukraine and delays in Iran's nuclear talks It is reported that the price of

The price of WTI crude oil futures, which is a representative crude oil futures product in the United States, soared by more than 8% in the transaction on March 6, exceeding $ 125 per barrel (about 14,400 yen), the highest since 2008. Recorded the value. At one point, it reached $ 130.5 a barrel (about 15,000 yen), and John Kilduff, who works for research firm Again Capital, points out that already high gasoline prices will be pushed up further.

This is the chart for the first week of March of WTI crude oil futures published by TRADING ECONOMICS, which publishes charts of various commodity trading prices. At the beginning of March, it was below $ 100 a barrel (about 11,500 yen), but the price is rising at a rapid pace. 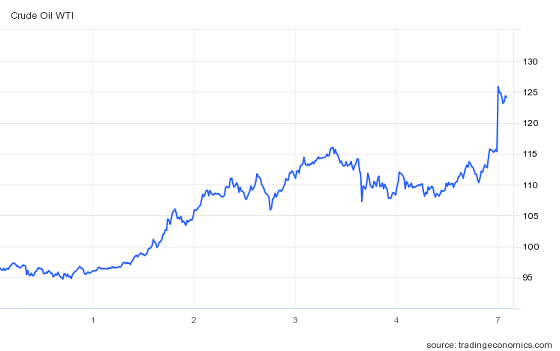 If you look at the chart for one month, you can see that it was about 90 dollars (about 10,350 yen) per barrel as of February. 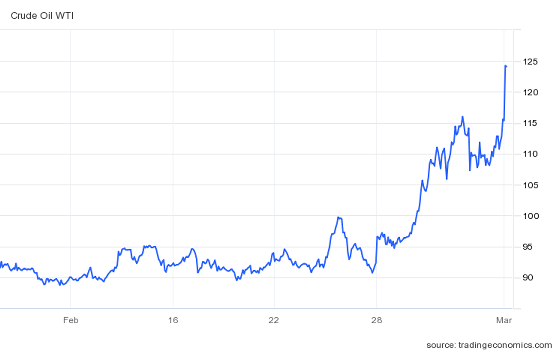 This is the half-year chart ... 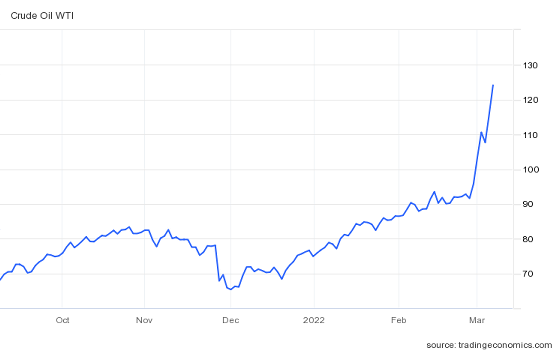 This is the one-year chart. You can see how sharp the price increase in March 2022 is. 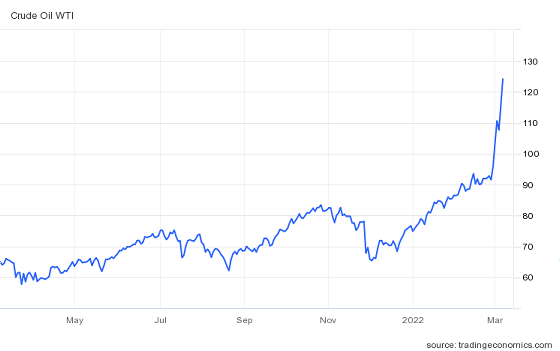 Looking at the five-year chart, WTI crude oil futures recorded a negative figure around March 2020, due to the restraint of corporate activities due to the spread of the new coronavirus infection and the decline in gasoline demand due to outing regulations. did. 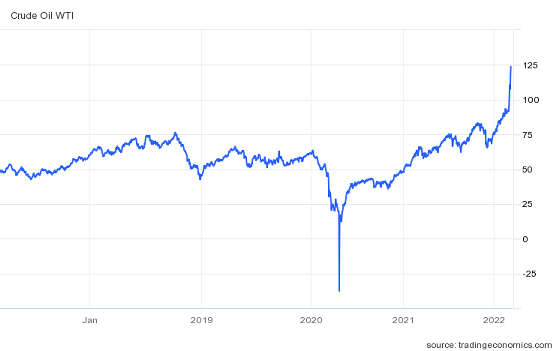 This is the 10-year chart. WTI crude oil futures for March 2022 are the highest in the last decade. 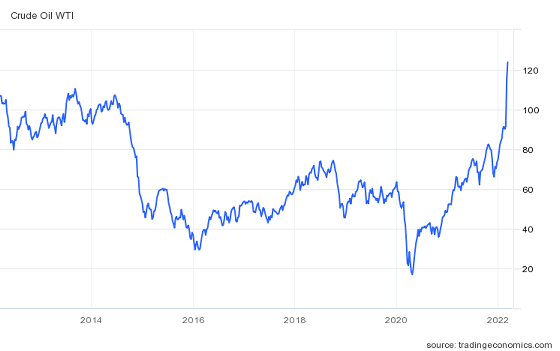 Looking at the chart in 2013, the WTI crude oil futures price continued to hit a record high in the latter half of the 2000s, and in September 2008, 1 barrel = 140 dollars (about 15,000 yen at the rate at that time). You can see that it is recording. The sudden drop immediately after that was due to the 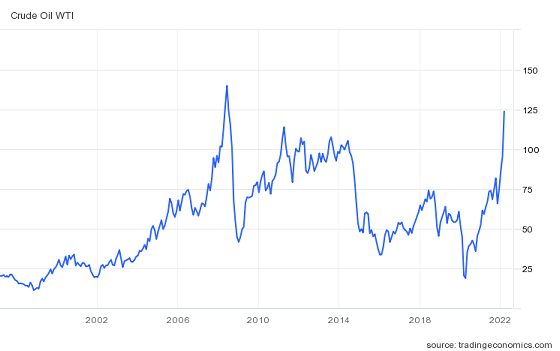 The price changes since the listing of WTI crude oil futures in May 1983 are as follows. 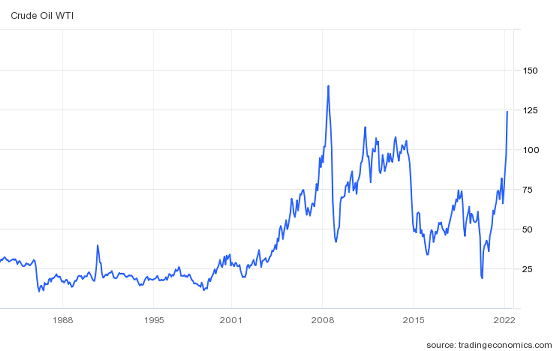 One of the reasons for the soaring prices of WTI crude oil futures is that the US and allies are considering embargoing Russian crude oil as sanctions for Russia's military invasion of Ukraine. US Secretary of State Antony Blinken reportedly said on March 6 that he was 'actively discussing with European allies to ban the import of Russian crude oil.' Buyers in Western countries have already begun to avoid Russian crude oil, and according to JP Morgan's analysis, 66% of Russian crude oil is having a hard time finding buyers. In contrast, Saudi Arabia's state-owned oil company, Saudi Aramco, has significantly increased its crude oil sales prices to Asia and Europe in April.

In addition to this, discussions on rebuilding the Iran nuclear agreement have stagnated, and the resumption of exports of Iranian crude oil is expected to be delayed. Talks on the Iran nuclear agreement are in the final stages, but Russia's Foreign Minister Sergeĭ Viklov, who is participating in the talks, called for a commitment not to interfere with trade, economic and military technology cooperation with Iran. The United States was restrained as sanctions against the United States were strengthened. Crude oil futures prices have also risen in Japan, and it has been reported that Middle Eastern crude oil futures surged on the Tokyo Commodity Exchange, and at one point the index price reached its highest level since 2008.

Tokyo crude oil soars for the first time in 13 and a half years 78,000 yen (Kyodo News) | Kumamoto Nichinichi Shimbun
https://kumanichi.com/articles/579854