A war on lowering oil prices among oil-producing countries broke out, pointing out that the threat of the new coronavirus is positive 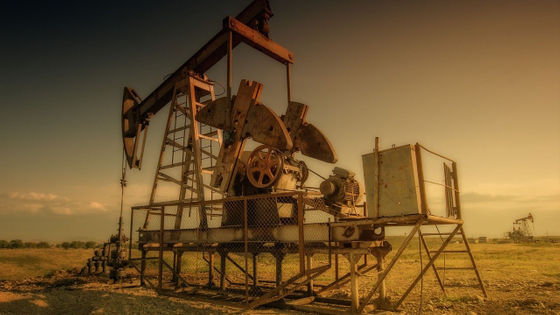 Organization of Petroleum Exporting Countries (OPEC) meeting of the 'OPEC plus' configuration as in non-OPEC oil-producing countries is the end in rupture, crude oil prices fell sharply. While there is concern that this could cause economic turmoil, some have said that it will have a positive effect on the global economy that has been hit by the new coronavirus. 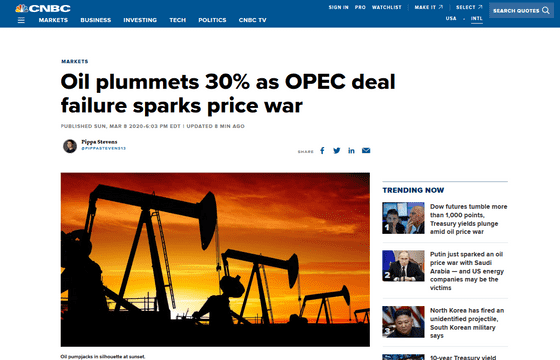 Oil crashes by most since 1991 as Saudi Arabia launches price war-CNN
https://edition.cnn.com/2020/03/08/investing/oil-prices-crash-opec-russia-saudi-arabia/index.html

The reason for the drop in oil prices is that the negotiations between OPEC and non-OPEC countries broke down at the OPEC Plus meeting, which adjusted prices through coordinated cuts in oil production. At the meeting, Saudi Arabia, the leader of OPEC, proposed a production cut agreement to stop the fall in oil prices caused by the outbreak of the new coronavirus. However, OPEC's intervention failed as Russia, the largest non-OPEC oil-producing nation, refuses to compete with Saudi Arabia over a crude oil share dispute. Saudi Arabia has clearly responded by announcing a significant price cut in April, cutting the official selling price of crude oil by $ 6 per barrel (about 623 yen).

'Saudi Arabia, trying to combat chronic oil overproduction, has turned to scorched tactics,' said John Kildaugh, an investment company Again Capital. `` OPEC and Russia's oil price war has begun in the midst of a significant decline in demand due to the new coronavirus, so price competition starting in November 2014, '' said Goldman Sachs analyst Damian Culbarin. It will be even more harsh. ' Regarding the oil price war that is appearing to be a patience comparison, the economic newspaper Bloomberg said, `` Russia may have a goal of declining oil prices stimulating demand, but it is not always likely to do so '' It said, the entire oil-producing countries, including Russia and will suffer a major economic blow showed the view .

On the other hand, there are some positive opinions about the low oil price. CNBC noted that oil prices have fallen and the average interest rate on the popular 30-year fixed-rate mortgage has fallen for the first time in eight years. These factors stimulated consumption, suggesting a positive impact on the economy.

Michael Walden, professor of economics at North Carolina State University, also said that falling oil prices and a strong consumer confidence index could support an economy that has been exhausted by the new coronavirus.

Is there a risk that the new coronavirus will trigger a recession? -GIGAZINE `` If employment and industrial production improve with lower oil prices, consumers will be able to focus on buying more than just masks and disinfectants, '' said Scott Nations, president of financial information company Nations Indexes. 'I hope that lower oil prices will boost consumption in a wide range of sectors, including retail and entertainment.