Nintendo deletes over 1300 BGM videos on YouTube for copyright infringement, none of which is monetized On January 29, 2022, Gilva Sunner, a YouTube channel that publishes a large number of videos centered on game music, reported that it received more than 1,300 notices regarding 'copyright blocks.' The list of targeted titles includes a total of 16 titles, including the 'The Legend of Zelda' series and the 'Super Mario' series.

Over 1300 copyright blocks on the YT channel today. Here are all the soundtracks Nintendo has blocked this time. Pic.twitter.com/AqSyIdc4iJ

According to Gilva Sunner, the video on the channel was blocked due to copyright infringement, even though it wasn't monetized. Regarding this, Kotaku, a game news site, said, 'It's not surprising news if you know Nintendo's achievements in fan creation, but the music deleted from YouTube this time can not be heard on services such as Spotify. That's a headache for fans. '

This isn't the first time Nintendo has deleted the Gilva Sunner video. Nintendo's copyright block has removed a large number of videos on the channel in 2019 and 2020 as well. When the video was blocked in 2020, Gilva Sunner said, 'I'm not benefiting from the video, but I understand that it doesn't justify uploading content, so this time. I'm not surprised or angry at Nintendo's response, but I'm a little disappointed that there are few other options. '

I'm also not angry or surprised that Nintendo is doing this, but I do think it's a bit disappointing there is hardly an alternative. If Nintendo thinks this is what needs to be done (to set an example), I will let them take down the channel. It is their content after all. (2/3)

Kotaku asked Nintendo about this copyright block and whether the company plans to provide music through streaming services in the future, but it said that no answer was obtained at the time of writing the article. Regarding Nintendo's attitude towards piracy, Kotaku said, 'It's true that it's legal for Nintendo to crack down on uploading its copyrighted works, but there aren't many ways fans can listen to the amazing BGM of Nintendo's past works. It's a shame. Given that Nintendo has quickly removed fan works and mods, the company's policy is unlikely to change for the foreseeable future. '

Nintendo has been known for taking strict measures against copyright infringement, such as removing the action game 'Super Mario Bros.' for family computers that enthusiastic fans ported to Commodore 64 over 7 years. I am.

I ported Super Mario Bros. to Commodore 64 over 7 years, but Nintendo applied for removal from copyright infringement --GIGAZINE 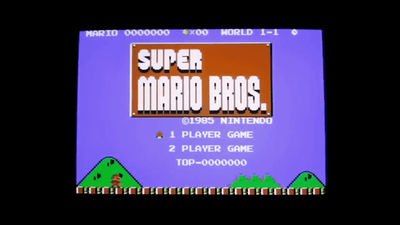