Is it true that enrolling in a school with a high deviation value will make you smarter? 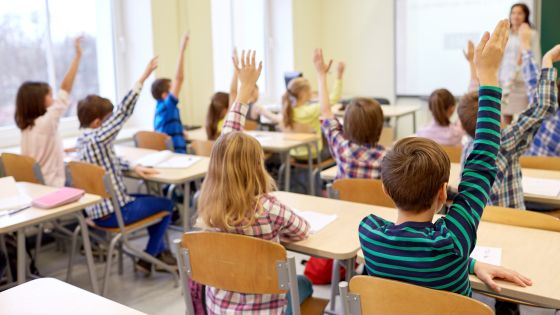 It is widely believed that if you go to a school or class where there are many excellent classmates, your grades will improve, but it is difficult to explain the mechanism by which classmates' grades affect their grades. Alexandra de Jeandle, who studies economics at the University of Sydney, and Nicholas Salamanca , who studies economics at the University of Melbourne, explain the impact of such classmates' grades on each student.

On the Mechanisms of Ability Peer Effects | IZA --Institute of Labor Economics
https://www.iza.org/publications/dp/13938/ 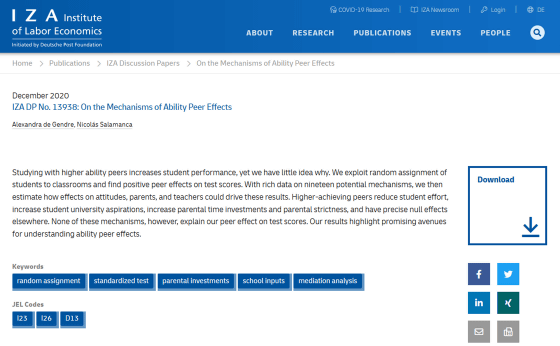 Being in a class with high achievers improves students' test scores. We tried to find out why
https://theconversation.com/being-in-a-class-with-high-achievers-improves-students-test-scores-we-tried-to-find-out-why-171400

Studies have confirmed that studying with a classmate with excellent grades improves grades, but the mechanism of this grade-improving effect is not well known. So, Jundle and Salamanka analyzed the grade-improving mechanism based on a database of information on more than 20,000 students attending schools in Taiwan.

According to them, in Taiwan, a national unified academic ability test is being conducted for the first and third graders of the national junior high school, which is a junior high school in Japan. They asked whether the results of this test at 1st and 3rd year belonged to 'a class with an average score close to the national average (average class)' or 'a class with an average score higher than the national average (upper class)'. I investigated whether it changes depending on. As a result, it was found that if there were students A and B with the same test result at the first year, the correct answer rate at the third year of student A who belonged to the upper class was 2.4% higher than that of student B who belonged to the average class. Did. 'The difference of 2.4% seems like a small difference, but it's a statistically significant difference,' he said, emphasizing the impact of class performance on each student's performance.

In addition to the above results, it has been found that even if the test results at the first year are the same, the university enrollment rate of students belonging to the upper class is 1.6% higher than the average class. Furthermore, it was revealed that the parents of the upper class students spent more time with their children than the average class and had more emotional support. On the other hand, it has also been found that there is no difference in 'learning time', 'number of frauds', 'investment in tutoring by parents', and 'students' evaluation of teachers and school environment' between the upper class and the average class. ..

Regarding these results, they said, 'Our study shows that high-performing classmates have a positive impact on student and parent behavior. However, the data obtained this time alone have many of the effects of improving grades. 'The fact that our study failed to clarify a clear mechanism of performance-enhancing effect shows the complexity of that mechanism,' he said, and will continue to collect detailed data. It shows the willingness to clarify the mechanism of improving grades.