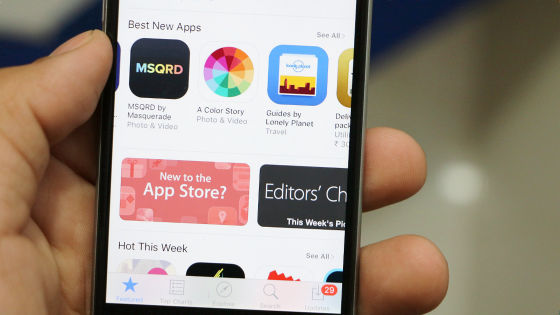 The iOS app only allows in-app purchases via Apple, but in September 2021, a proceeding against Epic Games v. Apple was ruled, and Apple was ordered to implement an 'option to allow external payments.' rice field. The deadline for implementation was December 9, 2021, but Apple requested the court to extend the deadline. The judge has denied Apple's request, indicating that Apple intends to file further complaints. This can significantly delay the implementation of external payment options.

In August 2020, Epic Games , the developer of the world-famous game app 'Fortnite,' implemented an in- app purchase format 'EPIC Direct Payment ' that does not go through the App Store to avoid fees collected by Apple. Did. However, Apple removed Fortnite from the App Store because Epic Games violated the terms. In response, Epic Games has filed a lawsuit for 'fair competition.'

On September 11, 2021, Judge Yvonne Gonzalez Rogers ruled and ordered Apple to 'accept payment options other than Apple's payment options in apps offered on the App Store.' I did. Meanwhile, Epic Games' allegations that Apple has hampered fair competition and violated antitrust laws have been rejected.

In a lawsuit between Apple and Epic Games, 'App Store should accept payment methods other than Apple', while there are voices saying that Apple will win --GIGAZINE By December 9, 2021, Apple told iOS app developers to 'enable payments using external services within iOS apps within 90 days,' Rogers said in a ruling. We had to allow 'implementation of links and buttons that allow users to navigate from the app to external sites and choose a non-Apple billing method.'

However, Apple said it would take time to change the specifications as described above, and requested the reservation of a court order. Apple says, 'We are addressing complex and rapidly evolving legal, technology and economic issues, and the revision of our guidelines will have a major impact. Withholding orders will help Apple protect consumers and platforms. 'I sent a letter to the judge, but Rogers refused the request because he didn't say how long Apple would need.' 'Consumers are accustomed to linking apps to browsers. Apple only states that it will take time to revise the guidelines, and does not give judges worthy of belief that the order will be devastating.' Said Rogers.

Apple appealed to the App Store in October 2021 for a non-Apple payment method, and Apple lawyer Mark Perry said the order was reserved 'until the proceedings were over.' It's an idea. However, it took years to close the proceedings, which Rogers refused.

Apple will sue the United States Court of Appeals for the Ninth Circuit for reservations following Rogers' refusal to request. An Apple spokeswoman said, 'We believe that business changes should not be required as all proceedings are closed. Given this situation, we reserve the case in the 9th Circuit Court of Appeals. I intend to seek. '