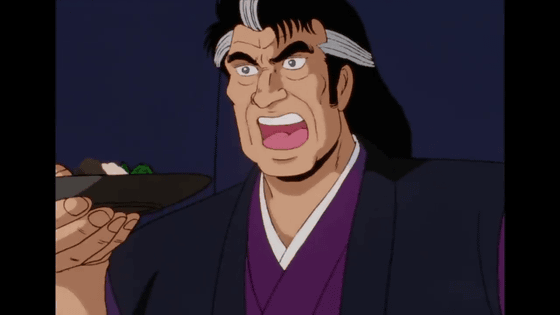 As a result of the 'Yuzan Kaibara general election' held on the official Twitter of the anime 'Oishinbo', the first place was Yuuzan Kaibara, who said 'Who made this sashimi!'. This is the scene that appeared in the 20th episode of the anime 'Conditions in front of the board', and the original is 'Who made this rough!'. In addition, up to 49th place has been announced in the thread following the following tweets.

Announcement up to TOP5 ????
What brilliantly won first place ...? !! pic.twitter.com/v4YxaxouvW

A special video that summarizes the appearance scene of Yuuzan Kaibara is also released on YouTube.

Why do scientists claim that 'there is no free will'? --GIGAZINE

What happens when Bayesian inference is incorporated into 'Q-learning' of machine learning? --GIGAZINE

What computer skills are being lost to high school students? --GIGAZINE

'Sexual diversity' in the world of lions, two wild male lions snuggling up to each other are witnessed in Kenya --GIGAZINE

It is mathematically 'impossible' for humans to live forever-GIGAZINE

Last night, I decided to have my son (5) toss me to solve the problem that my parents fell asleep while I was tossing my child to sleep. As a result, it was proved that it is effective for us parents to put their children to sleep because the son was sleeping a minute later.

I invented a keyboard cover to use when everything got better pic.twitter.com/XDrdP90J0n

I hit it too suddenly and burst into laughter pic.twitter.com/RlkSrSslC9

I wonder if there is a foreigner who sees this and thinks, 'Hey, Ikko-ikki's plastic model is out! I have to buy it!' It's okay, but is it okay? pic.twitter.com/kj6qikKOep

My second son told my classmates, 'My mom is cute, isn't it?', So when I picked him up at school, he said 'Which one did you want to see?' The moment I saw it, I received an unreasonable treatment that I was clearly disappointed with 'Oh ... Thank you ...'

I wanted to make socks that could prevent 'attacks from ghosts' even if I put my feet out of the futon pic.twitter.com/YV8FLOdLbx

I want to train so far. I want a muscle that a knife can't pass through. pic.twitter.com/U8wEdsEvHy

The 25 proportional seats of the Meiji Restoration are actually not that good. Just because the last 8 seats were too bad, I took 30 seats before that (Japan Innovation Party) and 40 seats before that (Nippon Ishin no Kai).
(But 16 seats in the single-seat constituency are the party's highest record)

LDP is less than two-thirds for the first time in nine years, re-passing is impossible House of Representatives election | Mainichi Shimbun

It seems that some people are rumored that Tamaki will go to the Liberal Democratic Party or the Restoration, but I will definitely deny it. The current Abe administration's corona measures and economic policies cannot save the people. While raising the flag of the reform middle road, we aim for a change of government while deepening economic policies, realistic security policies, and energy policies that save people's lives.

CNN.co.jp: An unidentified object that the U.S. submarine collided with, an unknown seamount.

The number of votes is 11 more than the number of voters ... The vote is confirmed without knowing the cause Kakihara [2021 House of Representatives election]: Asahi Shimbun Digital

Female suicide increased by 15%, partly due to 7,000 non-regular expansion Overall increased for the first time in 11 years: Asahi Shimbun Digital

[The younger the generation, the more # LDP support ]

In addition, 24.8 percent of the more than 70-year-old # Constitutional Democratic Party , such as stay to 14.2% in the 30s whereas the vote, even trend of opposition supporters as the elderly # report stearyl # news station

This is a graph of the changes in the voting results of the proportional representation system in the nine national elections so far.
The votes of the four opposition parties have been increasing since 2017.
The Ishin no Kai's votes, which appear to have increased suddenly, are natural considering that the party of hope has absorbed those who like it. Restoration + hope (successor Democratic Party for the People) is reduced in total. pic.twitter.com/WvSjiNk9At

I lost in the single-seat constituency. I was ashamed of my uncertainties that I couldn't bounce under any circumstances and resigned as secretary general. I was surprised that there was a supporter who believed in me and continued to support me at all times.

Sanae Takaichi makes an unprecedented 'use of the emperor' in a cheering speech 'If you lose the election, your Majesty will be inconvenienced' | Daily Shincho

A series of 'monkey sightings' information in Shibuya After that, they have not been captured in Shinjuku yet | NHK News

'The ability to win an election' and 'the ability to work for the people as a member of parliament' are too different. I think it's a big flaw in parliamentary democracy. Moreover, Japanese society is designed so that the gap there will grow endlessly.

I tried to sneak out of the room so as not to wake up the sleeping cats, and when I looked back at the door, the cats who kept their footsteps looked like 'I'm good at walking quietly, so leave it to me.' He followed me in a line later.

A professor of religious studies told me, 'When you decline a religion solicitation, say,'I'm satisfied with it now, so it's okay.'' Thank you to the professor who is very useful because he will give me ...

The shoji in my room is so cute that my grandfather made it, so there is only one in the world pic.twitter.com/T8HHVl1loa

Digression How to tie a trench coat belt that a Burberry clerk taught me before pic.twitter.com/vw5sZbU956

The sales methods of OTC drugs has changed to 'Let's Kyumo properly if cold' from 'even to people who do not rest in the cold', what because I think that great care, everyone give praise the Shionogi & pic.twitter .com / umBXqdBnuu

Every time I talk to a child in his early twenties at work, I think it's better to realize that even in his thirties and forties, when he talks to young children, he is properly entertained by the other person ... it's amazing. Or, I want to talk to you, that's really entertainment. If you think that you can get along well with the younger generation, you can't do it ... (Mashiro)

I asked my 2nd daughter, 'Why do you decide on your hairstyle and clothes according to school rules? Does that affect your grades?' 'Why should I learn it? Should I teach makeup at school?' And there is no BBA noise.

The first order has been completed!
This time, I made the original character of the client.

The name is 'Shirakage'
A type of dragon cursed by silk moths, it has a mouth but does not receive nutrition from food and lives by receiving magical power from other creatures. It seems to have the property of protecting the nest of the creature that gave it magical power. pic.twitter.com/1OjCaafQ5d

The floating hand water bowl of the pumpkin was cute. pic.twitter.com/FwIp2aamb6

It hasn't been talked about nationwide since the water was restored, but the bridge is still down normally. pic.twitter.com/HTpHGXAE3P

Relax in a small box. : 3 pic.twitter.com/qBFG05dJFd

It's getting cold again recently, so maybe it's time to warm up again with a Chinese cabbage swaddle.

Once wrapped, it's too cute to really sleep like a baby ww pic.twitter.com/ynByYo6Vr1

I was surprised at the fact that most of the causes of bruxism are heredity. https://t.co/vvuOOPRDEX

'Only a handful of geniuses can live on pictures and music.'
It is not talent but cooking, taxes, general education to live, and no special gifts are necessary to realize that the curse has been applied to me for a long time and to live by expression I wanted adults to teach me more

Don't think that everyone values 'culture', 'art', and 'academic'. There are a lot of people who don't have to do that.

About Specter threats and headers that websites should set

Behind the scenes specific considerations and defenses-Lack Security Boiled Blog

Before the 'KADOKAWA Media Mix Complete History Subculture Creation and Development' (Tatsuo Sato), which was compiled as a corporate history and is not available in the world, was touted as awesome, it shows a part of its awesomeness. There was a work called 'Keroro Gunso', and manga and TV animation were popular, and with the support of children, Keroro and others were representative of the characters recommended by KADOKAWA. but…

I saw the delivery of Zhouo coral, but I couldn't catch up with it.

A story drawn by Jiro Taniguchi just before the start of the 'Gourmet of Solitude' series, in which a salaryman who had a long-standing illness with his father returns home for the first time in a long time (1/6) pic.twitter.com/0oZEhKNqKD

All of the painters and writers! pic.twitter.com/iq1ouEVsDS

I couldn't get out of there when I was playing in the water pic.twitter.com/0NVHxXIgPB

A sense of distance peculiar to a childhood friend Yes, cheese pic.twitter.com/TobM9K6E7B

Spirited Away in 4 frames (repost) pic.twitter.com/XNCchqT97K

A man who picked up a girl with her pic.twitter.com/pKlXbJUnqw

'For some reason, a cold woman only for me ...' pic.twitter.com/QydJPPQAjr

Announced up to TOP5 Who won the 1st place ...? !! pic.twitter.com/v4YxaxouvW

The story that the partner I believed in was extremely dangerous

【Notification】
The 'Audition with Characters' announced in March of last year, but since there were no candidates who met the requirements, we are very sorry but we will say 'No applicable person'. We are very sorry to have kept you waiting for a long time.

We are planning to thank Dr. Kakage and Dr. Parsley for their support in another way.

It's been a bit painful, but recently it's become much easier to live, so I'll share what worked. pic.twitter.com/Y6L7x3o1Ge

What was amazing about Katsuhiro Otomo's manga was the first time I drew a 'Zun' in which the concrete wall was dented in a circle in a battle between supernatural powers. I think it's great to draw this image that no one has seen with a pen. pic.twitter.com/eTELAQvEMm

Thank you for all the congratulations on the animation.
I haven't really realized it yet, so I'm glad that everyone says wow.
I hope it will be a wonderful work and I can give it back to everyone who supported me. pic.twitter.com/YDANxFHcGK

The Joker is a dangerous movie, and when you watch it, everyone looks like the Joker. If you have such an opinion, first ask the opinion of Mr. Howakin Phoenix who actually played the Joker. pic.twitter.com/apiXPXpQnr

Mako Komuro and his wife continue to support 'hospitality' ... The Imperial Household Agency staff is on behalf of shopping, and security costs are 20 million yen in a month | Women themselves

When I heard that Keanu Reeves's secret shooting video was on the market and I wondered if I could see Keanu different from usual, it was Keanu in normal driving who helped the staff carry the shooting equipment pic.twitter.com/ kvsNcJje5H

I'm sometimes asked, but when I was a god in the Hyokin tribe, I was really making the judgment of ×, but only when the next schedule was full and I couldn't make it in time if I was bathed in water pic. twitter.com/fssv4Mx5aO

I'm often asked 'Is this a recommended horror movie?', So I summarized it.

Your suggestions. About your sorrow.
This word. It's not a bad word. Your grief is Okinodoku-sama. is. So that you can understand even in Chinese characters.
Thank you for your pity. This is because of consideration. However, I get angry when I come home to Arin.
That is also a language professional, and it will be a couple quarrel.

◆ New products (clothing, food, housing)
(PDF file) A country ma'am with a moist and dense texture that is only available in winter. 'Country Ma'am (Orange Chocolat / Ruby Chocolat)' will be released on November 16, 2021 (Tuesday)!