NASA has released a time-lapse movie that takes two years to assemble the silent supersonic aircraft 'X-59 ', which is being developed as one of the experimental aircraft and rocket '

X-plane' by the United States.

NASA began developing the X-59 in 2018. Lockheed Martin , an aircraft and spacecraft developer, has signed a contract with NASA to manufacture the X-59 for $ 247.5 million by 2022. 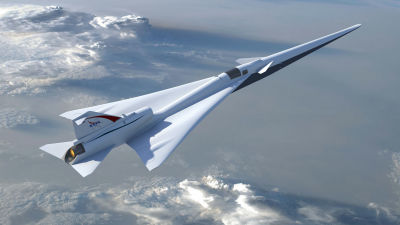 The X-59 is under construction at Lockheed Martin's assembly plant in California. It is designed to fly over the surface of the sea at supersonic speeds of about 660 mph (about 1062 km) without causing a sonic boom.

You can see how the X-59 is actually assembled in about two years from May 2019 to June 2021 in the following time-lapse movie.

The X-59 is an aircraft with delta wings , similar to the supersonic aircraft Concorde , which was once operated for commercial purposes. Frames for assembly are lined up in the factory. The elongated part below is the fuselage part of the fuselage, which is 30 feet (about 9.1 m) long, and the flow is that the wings are assembled and then connected. Two cameras are attached to the nose of the X-59, and the images captured by these cameras are processed by a computer and displayed on a 4K resolution monitor in the cockpit. NASA calls this system the '

eXternal Vision System (XVS).' Due to the design of the X-59, the cockpit canopy (windshield) cannot be raised from the fuselage, so it is necessary to shoot the front with a camera. And the moment when the assembled fuselage and wings are combined. The fuel mechanism and control mechanism are housed in the wing, which is 29.5 feet wide (about 9.0 m), and it has the most complicated structure. The wing part is the first part to be manufactured, and it is said that it was assembled by two robot machines named 'Mongoose' and 'Cobra' respectively. I can see the shape of the body part, which was only the skeleton. The shape of the nose is finally designed to suppress the occurrence of sonic booms and prevent noise problems. The tail wing is assembled on the wing.

A turbofan engine called General Electric F414 is attached to this tail, and heat-resistant materials are used to protect the X-59 from the exhaust heat of this engine. It is said that the reason why the engine is embedded in the tail wing and placed on the upper part of the horizontal delta wing is to make it difficult for the noise from the engine to reach under the X-59, that is, on the ground. 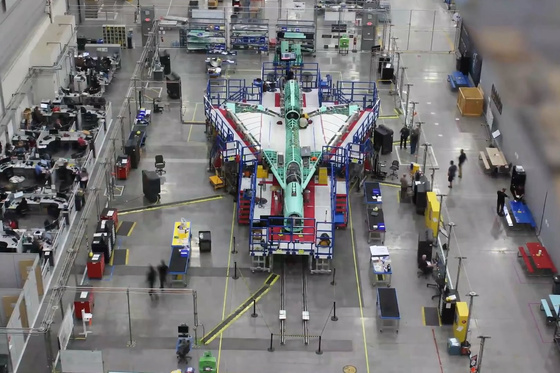 The X-59 is under construction and will be tested for initial flight in 2022, according to Dave Richwine, deputy project manager for NASA's low-shock wave flight demonstrations and ration (LBFD) technology. It is said that it has become. In 2023, it will fly at the Armstrong Flight Research Center test site in California to prove that it is actually noise-free and can be safely operated in national airspace. In 2024, we plan to actually fly the X-59 over multiple parts of the United States to see if people on the ground can hear the sonic boom 'Don!'.

The X-59 is a single-seater fighter, not intended for supersonic flight with passengers like the Concorde. 'If NASA's X-plane development plan collects data on supersonic flight, aircraft manufacturers will develop new supersonic aircraft in the future, and private airlines will prepare supersonic flights. You may be able to do it. '