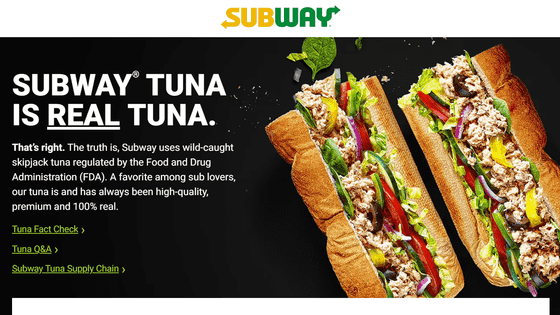 Subway has denied allegations that the tuna used in its sandwiches is fake, and has set up a site that appeals that 'Subway's tuna is 100% genuine.' The site also includes Q & A about subway tuna and an illustrated explanation of the process of making tuna.

Subway was filed in a class action in February 2021 stating that 'Subway's sandwich tuna is not genuine.' In addition, a follow-up test conducted by the New York Times in June also resulted in 'tuna DNA could not be detected.'

As a result of the investigation that 'tuna DNA' could not be detected from the tuna of the subway, it was pointed out that it is meaningless to disguise the cheap tuna from the beginning --GIGAZINE 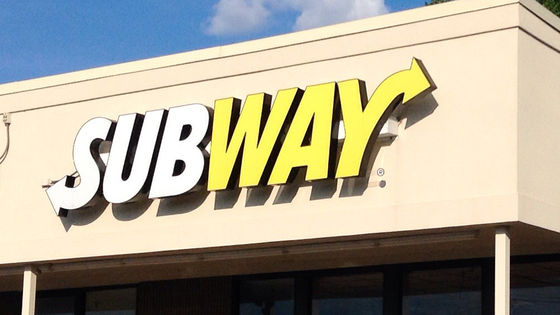 In response to these allegations, Subway published the aforementioned special site, SubwayTunaFacts.com , in which 'The New York Times' tests did not detect tuna DNA in subway tuna, but experts. Says that the lack of DNA is not uncommon in the testing of cooked tuna, nor does it mean that the tested sample did not contain tuna. ' Did.

As Subway points out, the New York Times test mentioned above did not detect the DNA of non-tuna fish, but simply did not detect the DNA of the tuna. From this point, Subway said, 'If the test confirmed the presence of other fish meat proteins, we might have questioned. But the conclusion that it was'not detected'is simply what the protein in the sample is. It means that I couldn't tell if it was the meat of the fish, which means that the problem was not with the tuna but with the inspection. '

According to Subway, Applied Food Technologies , a testing company that can test processed foods, tested 150 pounds of subway tuna a total of 30 times, and all samples were 'yellowfin tuna or The result was 'Katsuo'. Subway also revealed to the company that the importers of sandwich tuna are Rema Foods and Jana Brands , and that Subway tuna is regulated by the US Food and Drug Administration and The Fisheries Certificate of the US Marine Fisheries Agency. It states that it has cleared the requirements of Origin (Certificate of Origin of Fisheries).

Regarding the course of the class proceedings that triggered the series of allegations, 'The plaintiff abandoned the original claim that the subway tuna did not contain tuna, and said,' The subway tuna is 100% natural yellowfin tuna. We're switching to the claim that it's not bonito, but plaintiffs haven't disclosed test results showing that Subway tuna isn't 100% natural, and they haven't claimed to have tested it. Given the facts, the proceedings are a reckless and unjustified attack on Subway's brand and sales, as well as the livelihoods of franchise merchants. ' Subway will file a petition with the court to dismiss the plaintiff's proceedings.

Below is a description of the subway regarding Tuna's supply chain. Rema Foods and Jana Brands, which sell tuna to Subway, source natural bonito from Thailand, the Philippines and Indonesia, which have the highest tuna catches in the world. 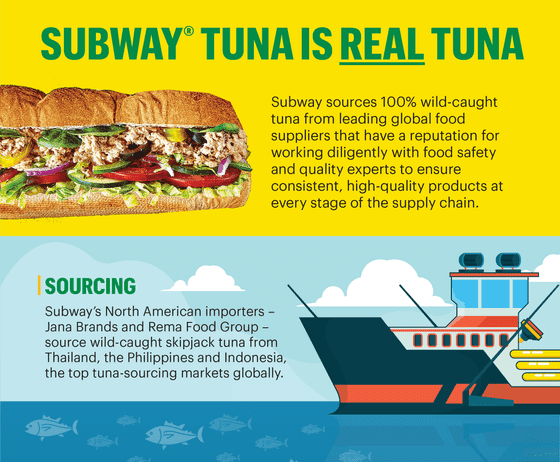 The caught fish are frozen on board, then landed and sent to the processing facility with the captain's statement stating traceability information. After that, it is processed into tuna after undergoing multiple quality inspections and delivered to each store on the Subway. 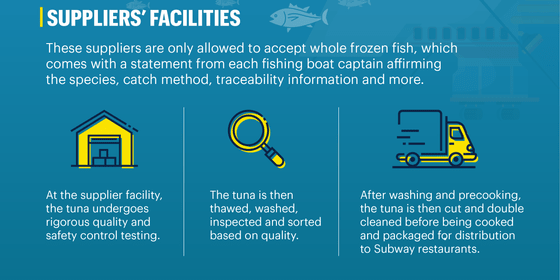 It is said that the Subway store provides the tuna delivered in this way to customers by mixing it with mayonnaise in the store's kitchen. 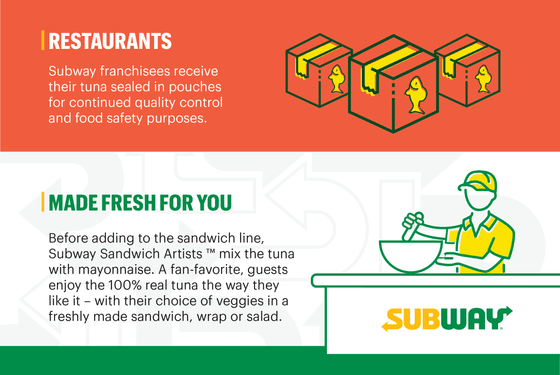