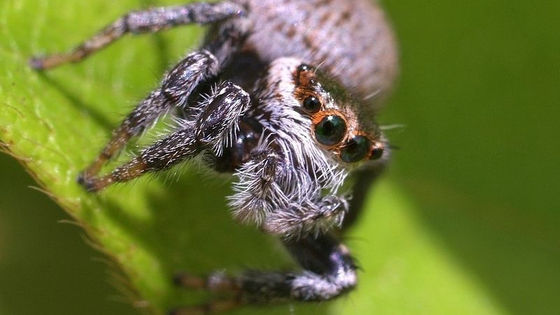 A research team at Harvard University has announced that jumping spiders have 'the ability to distinguish between living things and inanimate objects.' This ability has only been confirmed in vertebrates so far, so the research team says, 'It may be more widespread in the biological world than humans think.'

Jumping Spiders Seem to Have a Cognitive Ability Only Previously Found in Vertebrates
https://www.sciencealert.com/jumping-spiders-seem-to-have-a-special-ability-only-seen-in-vertebrates

The body of most living things is made up of interconnected joints, and the position of the joints changes during exercise, but the distance between the joints does not change. Movement the way of this joint is ' Biological motion is referred to as a (biological motion)', many of vertebrates such as humans by using a biological motion is believed to have visually identify the biological and inanimate objects I will.

In an experiment conducted by a research team led by Massimo de Agro of the University of Regensburg, Germany, Menemerus semilimbatus, a type of jumping spider that is a very common spider distributed over a wide area of the Northern Hemisphere, has the ability to recognize biological motion. To find out if it is. The research team showed 60 Menemerus semilimbatus a 'set of points that move like living things' that is often used in biological motion experiments, and investigated their ability to discriminate.

Below is an example of a 'set of points that move like a living thing' used in biological motion experiments. The following is an extraction of only the movement of lights installed on the human face and joints, and humans have the ability to imagine 'moving humans' only by the movement of these lights.


Since the subject of this research is a spider, the research team designed a movie of 'a set of moving points that look like a spider.' The actual thing is below, and 11 points that imitate the main joints of the spider reproduce the movement of the spider that moves horizontally.

The image extracted from the movie looks like this. Click to see the moving dots in a GIF animation.

Also, as a comparison target, the research team prepared

an animation of a spider that behaves in the same way as the previous set of points (MP4 file). The animation can be downloaded from this link and the download size is about 64KB.

According to the research team, when spiders see what they can and cannot recognize at the same time, they tend to give priority to what they cannot recognize. 'We can tell that a spider knows a set of points that imitate the movement of living things with a compound eye, but the random movement is strange, so we can't understand what's there,' Agro explained. .. The researchers claim that more diverse animals than previously thought have the ability to recognize biological motion and distinguish between living and inanimate objects, and perform similar experiments on insects and mollusks. I have commented that it is planned.

The Menemerus semilimbatus used in the experiment is said to have been returned to its original location without any damage.