Search engine 'DuckDuckGo' that emphasizes privacy protection has grown rapidly, and the number of application downloads has exceeded 50 million in the past year 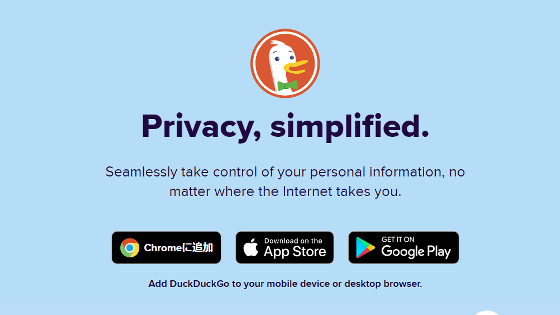 DuckDuckGo, an internet search engine, focuses on protecting user privacy, so it has a strong presence as an alternative to Google search, which actively utilizes user information and personalizes search results. On June 16, 2021 local time, DuckDuckGo said, 'Over 50 million DuckDuckGo apps have been downloaded in the last 12 months, increasing search traffic by 55% and ranking second in the United States, Canada, Australia, the Netherlands, etc. It's now a mobile search engine. '

Thanks to you, over the last 12 months we've been DuckDuckGrowing like crazy!

• More than 50M app downloads
• 55% increase in search traffic
• Became the # 2 search engine on mobile in the US, Canada, Australia, the Netherlands & more https://t.co/tnZGvzWBPs pic.twitter.com/zkIb5ou3r4

DuckDuckGo said in an official blog that privacy skeptics have previously pointed out that 'people care about privacy, but do nothing to protect it.' However, with iOS 14.5 released by Apple in April 2021 to allow apps to refuse to track users for advertising purposes, it became clear that most users are refusing to track them. 'Most people choose privacy when they create a simple, non-sacrificing way,' said DuckDuckGo about the move.

As a result of the increased usage of the DuckDuckGo app, the number of search queries per day exceeded the 100 million mark in January 2021. Also increased 55% search traffic per month in the past 12 months, DuckDuckGo is the second largest mobile search engine next to Google search in several countries, including the United States, Canada, Australia and the Netherlands growth was. 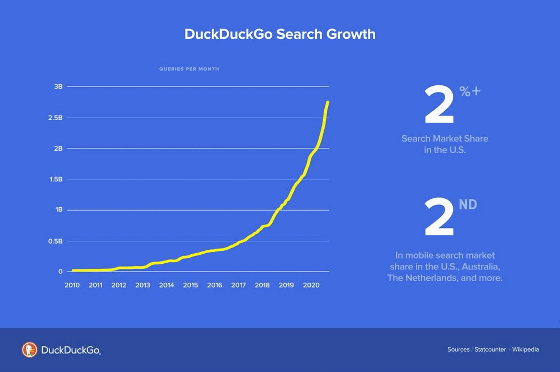 DuckDuckGo claims that its strength is that it can introduce important DuckDuckGo privacy features such as tracking blocking and top-level HTTPS connection support by downloading a single app or extension. He said users can activate an all-in-one 'privacy set' for free and by default, as no complicated settings are required during deployment.

DuckDuckGo will continue to roll out additional privacy features, and within a few weeks it will offer an email protection feature called 'DuckDuckGo Email Protection' in beta. Also, in the second half of the summer of 2021, the ability to block app tracking on Android devices will be available in beta, and it is planned to release a desktop version of the browser app by the end of 2021. ..

In addition, DuckDuckGo has been making profits continuously since 2014, and at the time of writing the article, it states that the annual revenue exceeds 100 million dollars (about 11 billion yen). By the end of 2020, it had successfully raised over $ 100 million in secondary investment from new and existing investors.