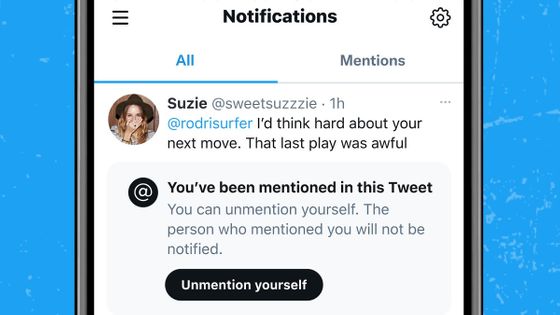 On Twitter, you can refer to other users by using @tweet (mention) that puts '@username' in the tweet. Mentions that allow you to refer to other users without replying to a tweet are useful, but in some cases mentioning or notifying them can be annoying. So, Twitter privacy designer Dominic Camozzi reported that he was considering 'a feature to remove mentions of himself from tweets posted by other users.'

Check out these early concepts that could help control unwanted attention on Twitter.

Feedback, especially at this beginning stage, is invited (and wanted)! ???? pic.twitter.com/6SpzqiwFlL

Twitter to give users more control-'Unmention' feature on its way | TechRadar
https://www.techradar.com/news/twitter-to-give-users-more-control-unmention-feature-on-its-way

The mention function that puts '@username' in a tweet is useful when you tweet about a topic that you want a specific user to react to, or when you want to point to the account of the person who appears in the tweet. However, sometimes you can mention tweets that are offensive to you or difficult to react to.

So Camozzi reported on several features that control mentions as an 'early idea.' The first is the 'remove mentions from specific tweets' feature. This is a feature that allows you to remove a mention of yourself from the menu icon at the top right of the tweet that you are mentioning. This way you can remove mentions from conversations that you don't want to be involved with.

I want to make it easier to untag yourself from a Tweet or conversation you don't want to be involved in.

Just pick “Unmention yourself from this conversation” from the more info menu and the link to your profile will be removed. Pic.twitter.com/nfHIyReE9f

Going further, if someone you don't follow @ mentions you, you'll get a special notification. If you unmention yourself from there, the Tweet author will not be able to mention you again. Pic.twitter.com/RTFBEnkPFf

The third function is 'Restrictions on accounts that can be mentioned to me'. If you are tired of Twitter mentions and want 'perfect peace and tranquility', you can limit who you can mention to yourself within a range of 1 day, 3 days, or 7 days.

You can also restrict certain accounts from mentioning you.

Need some peace and quiet? Keep EVERYONE from mentioning you for 1 day, 3 days, or 7 days. Pic.twitter.com/d50JIcsPok

In addition, he said that he is considering a system that can notify when the number of mentions to himself by unfollowed users is increasing and take immediate action so that the situation does not worsen. Camozzi encourages us to give us feedback on the features as the set of features is an early idea.

Getting a little TOO much attention? I want to make it easier to address that in 3 ways.

1️⃣ Get notified when you're getting a lot of mentions
2️⃣ Review those Tweets
3️⃣ Change settings to stop the situation from escalating further pic.twitter.com/CL43INsMky

At the time of writing, it's unclear if the new features announced by Camozzi will actually be implemented. A Twitter spokeswoman told TechCrunch that the set of features was 'still in the early stages of design and research,' while 'we're still excited about community feedback.' ..

In recent years, Twitter has been focusing on new features to prevent harassment and abuse on the platform, and from August 2020, we introduced a function that allows you to select users who are allowed to reply before tweeting, and newly tweeted. It is reported that the ability to change who can reply later is also being tested. 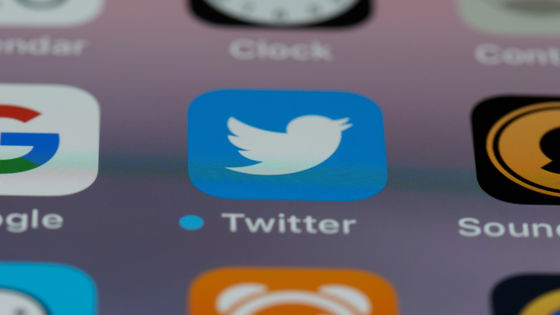