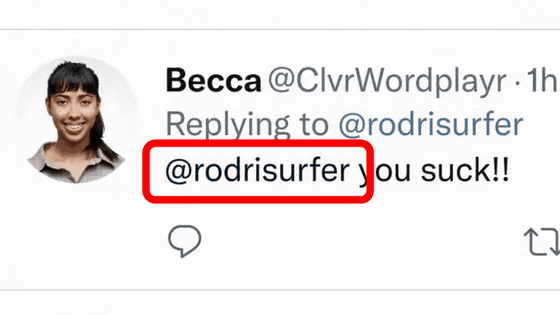 On Twitter, entering '@account name' when referring to a specific user in a tweet is called a mention. Once mentioned, some users may have complained, 'Don't mention yourself!', As notifications about subsequent conversations will fly incessantly. To give you more freedom to use such mentions, Twitter has announced that it is testing a 'get out of conversation' feature to dement.

Twitter has announced that it is testing a 'get out of conversation' feature that allows you to unmention yourself from a particular conversation. At the time of writing the article, this feature is limited to some users of the web version of Twitter.

Twitter Safety, one of the official Twitter accounts, said, 'We are testing the unmention feature. This is a new way to protect users and get out of conversation. Currently for some users of the web version. We are providing it. '

We're experimenting with Unmentioning—a way to help you protect your peace and remove yourself from conversations—available on Web for some of you now. Pic.twitter.com/rlo6lqp34H

To use the 'Get Out of Conversation' feature, click the three-point reader icon in the upper right corner of the tweet. Then select 'Leave this conversation'. It's just text. This will prevent the mention from working. Foreign media The Verge said, 'The choice to get out of the'hostile','uninteresting' and'don't want to participate'tweet conversations is a welcome option, especially for those who are experiencing harassment on the platform.' I am saying.