Which country made the most money in Bitcoin in 2020? Bitcoin, a P2P virtual currency, was originally a digital currency managed by a distributed ledger, but is now being bought and sold as a financial product rather than a currency. The price of Bitcoin fluctuates greatly from day to day, and investors generate large profits and losses due to the difference. Chainalysis, a cryptocurrency-related market research company, calculates the profits generated by such Bitcoin transactions for each country.

Chainalysis Blog | Bitcoin Gains by Country: Who Benefited the Most from the 2020 Boom?

Since Bitcoin is based on blockchain and distributed ledger technology, there is no way to know exactly where the parties to an individual transaction are, and it is very difficult to analyze geographically.

Therefore, Chainalysis measured the on-chain flow to cryptocurrency exchanges in each country and converted the movement of Bitcoin traded on the platform into a price to estimate the realized profit by Bitcoin in US dollars. We also distributed profits by country based on the percentage of traffic each country occupies on each exchange's website.

Chainalysis said, 'While it does not take into account the profits of cryptocurrencies that have not been withdrawn from the exchange, this analysis can reasonably estimate the profits that investors in each country will earn from buying and selling Bitcoin in 2020. I can do it. ' 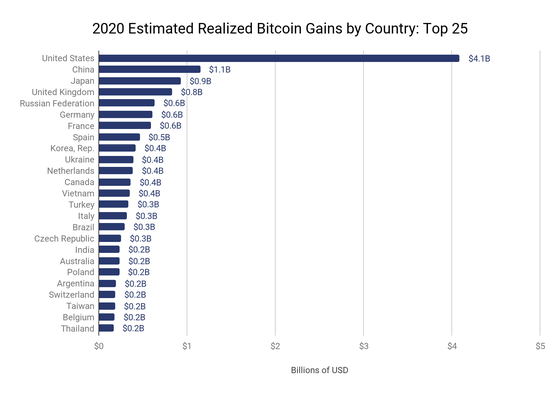 Chainalysis points out that some countries are digging into higher ranks when it comes to Bitcoin investment compared to traditional economic indicator rankings. For example,

Vietnam, which has a gross domestic product (GDP) of $ 262 billion (about 28 trillion yen) and is ranked 53rd in the world , is classified as a 'low-income country' by the World Bank, but due to the high penetration rate of virtual currencies, In the ranking of profits from Bitcoin, it ranked 13th with 400 million dollars (about 43 billion yen).

In addition, the Czech Republic, where Bitcoin is being accepted, such as the installation of Bitcoin ATMs on the subway, has a GDP ranking of 54th, but the profit from Bitcoin has risen to 281 million dollars (about 30 billion yen). , Is the 17th place in the world.

On the other hand, India, which has the world's fifth largest GDP of 2.9 trillion dollars (about 310 trillion yen), is the 18th largest in the world with Bitcoin investment profit of 241 million dollars (about 26 billion yen). Compared to the scale of the domestic economy, it is in a state of considerable stagnation. This is due to the fact that the Indian government is negative about cryptocurrencies, such as banning banks from trading on crypto exchanges and considering bills to ban cryptocurrencies altogether. I'm watching Chainalysis.

India considers total ban on cryptocurrencies, even 'holding' is penalized-GIGAZINE Turkey, which has the world's 25th largest GDP of $ 761 billion (about 82 trillion yen), has a return on investment of 300 million dollars (about 32 billion yen), ranking 16th. However, Chainalysis pointed out that the Turkish government has been cracking down on cryptocurrencies in recent years, and it may not be possible to make big profits with Bitcoin in Turkey in the future.

In addition, the following is a line graph showing the profits of Bitcoin in each country according to the time series for the whole of 2020. A rough move shows that most investors are concentrating on the end of the year and profiting from Bitcoin. It is also shown that it is the United States (pink solid line) that has the largest fluctuation in profits in response to the average price of Bitcoin (blue dotted line).

'This analysis suggests that Bitcoin has yielded high returns for emerging market investors like no other way, while the data show that cryptocurrencies are subject to strict regulations. It also suggests that citizens are losing that opportunity in countries that are trying to limit their use. '