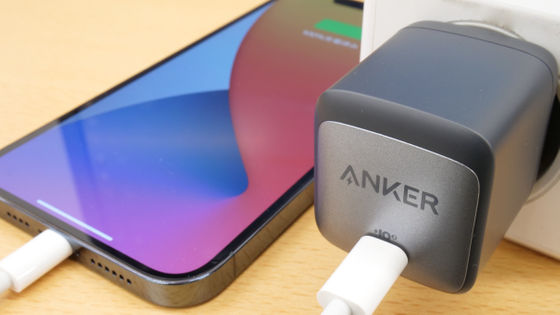 that supports Programmable Power Supply (PPS) , which is a fast charging standard for USB Power Delivery (USB PD). Anker's new USB charger, which uses next-generation semiconductor GaN (gallium nitride) to replace silicon, is said to have the power and wide range of support that can be charged three times as much as a standard charger in spite of its compact size that is easy to carry. That's why I actually used it and checked it. On the back side, it was stated that it was a 2nd generation GaN-equipped USB charger and that it was compatible with charging a wide range of models. In addition, although only Apple products such as iPhone and iPad are listed in the package, according to Anker's announcement material, a wide range of devices from smartphones to laptops such as

Dell's XPS 15 as well as major Android models such as Pixel 5 and Galaxy S21. It is said that it corresponds to. So, open the package. 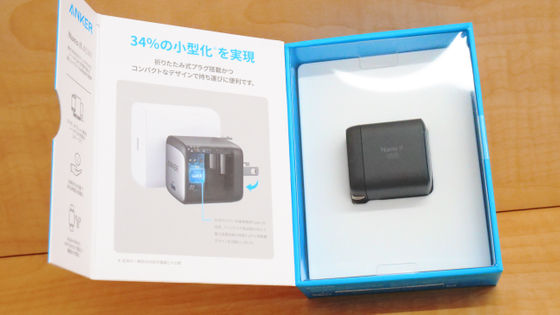 The contents are the starter guide and the Anker Nano ll 45W body. 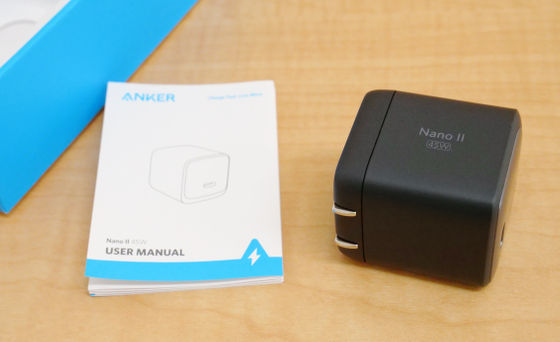 The Anker Nano ll 45W is a size that fits comfortably in the palm of your hand. The dimensions are 35 mm x 38 mm x 41 mm, and it has a shape close to a rectangular parallelepiped. 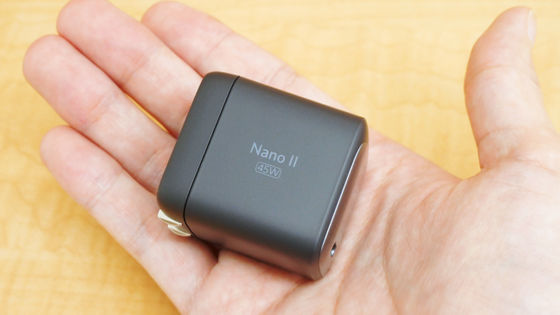 On the front, there is one USB Type-C socket of Anker's original standard,

Power IQ 3.0 , which is compliant with USB PD and Qualcomm Quick Charge.

On the back where the outlet plug was stored, it was stated that a maximum output of 45W was possible. 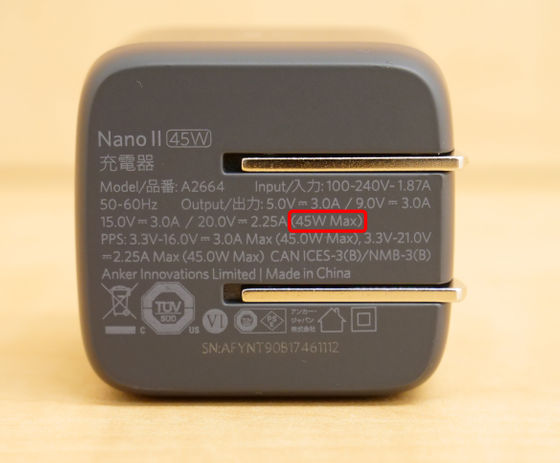 The outlet plug can be easily pulled out with your finger. 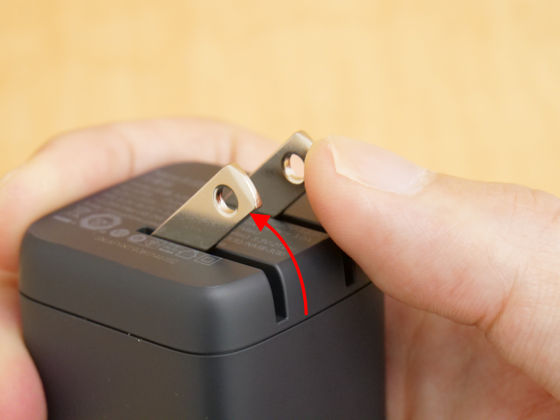 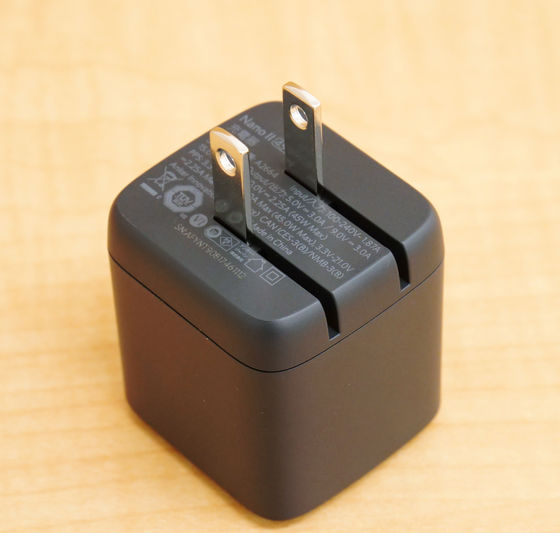 From the left, Apple's genuine 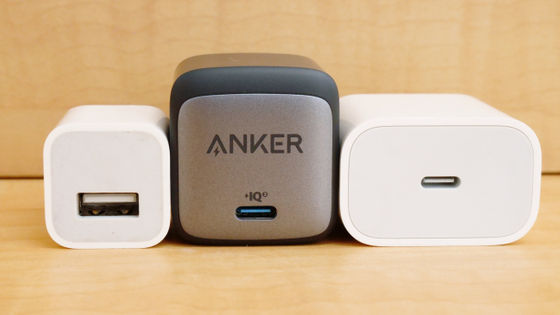 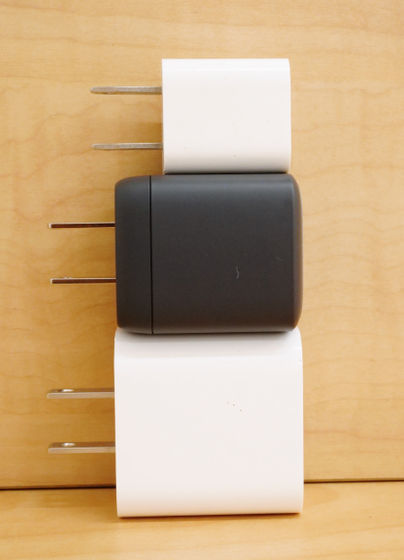 The actual weight is 68g. I will use it immediately. First, insert the Anker Nano ll 45W into an outlet and connect the USB Type-C cable ... 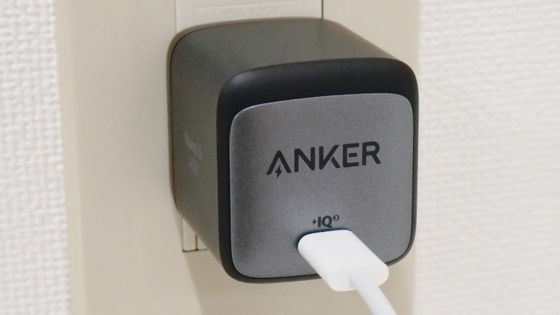 Connect the other end of the cable to the device. This time, I decided to charge 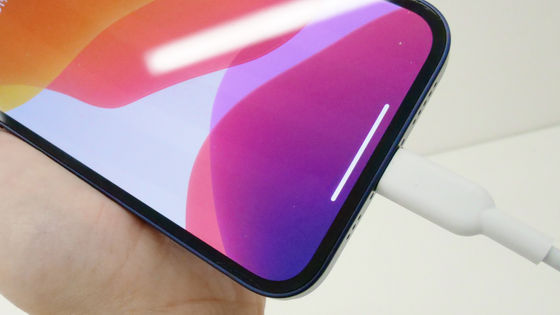 NK Battery. It only takes about 15 minutes to charge about 30%. The graph of the remaining amount transition is as follows. A nearly vertical graph is drawn from 2% to 33%. For comparison, I also tried charging with a 5W USB power adapter.

Apple no longer includes a power adapter with the iPhone 12 series etc. in order to achieve the environmental goal, so like this 'I bought a new iPhone but I am using a conventional model power adapter' There should be many people who say. 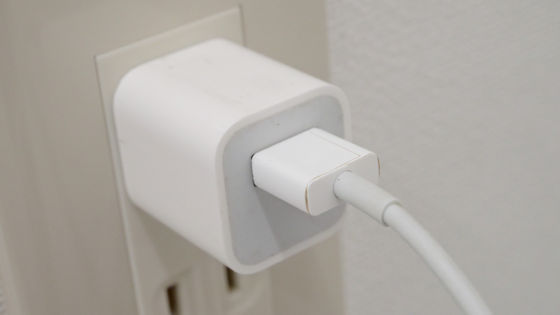 The resulting graph is below. You can see that the slope is gentler than the graph above. 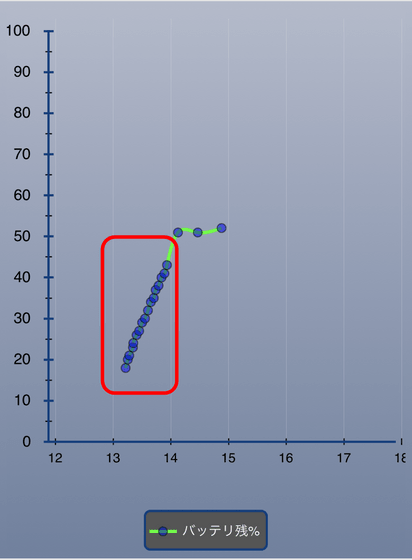 Looking at the record, it took less than an hour to charge the remaining amount from 18% to 51%, which was more than three times as long as the Anker Nano ll 45W. 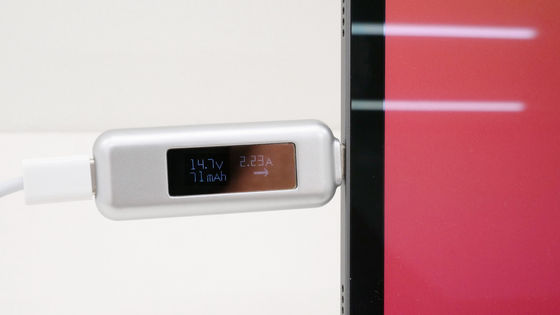 For comparison, when I checked with Apple's genuine 20W USB-C power adapter, it was '8.69V x 1.99A = 17.2W'. Although it did not reach the theoretical value of over 30W, it means that the Anker Nano ll 45W could be charged with nearly double the output of the genuine product. 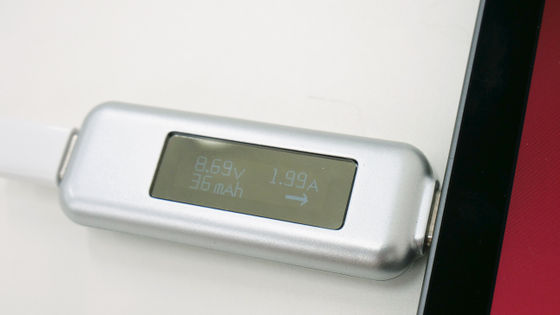 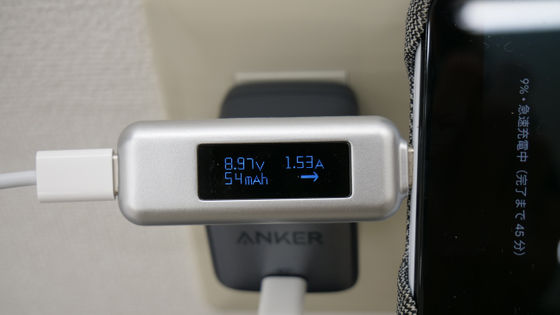 When I used it on my notebook PC, the editorial staff output almost the theoretical value of '19.9V x 2.26A = 44.974W'. In this way, although there are differences depending on the device, the Anker Nano ll 45W can be said to be a power adapter that can charge from smartphones to laptops at high speed while being compact, which is almost the same as genuine Apple products. 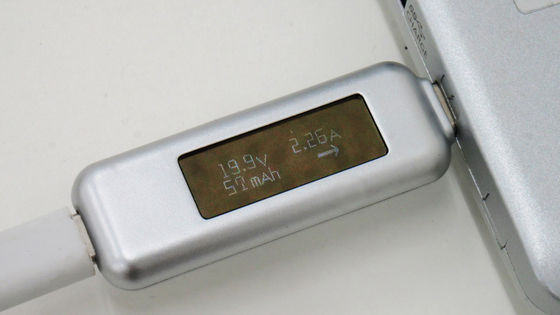 'Anker Nano ll 45W' appeared on Amazon.co.jp and Rakuten Ichiba's Anchor Direct Rakuten Ichiba store from May 25, 2021 for 3390 yen including tax, but it was sold out at the time of article creation. thing and do not stand even the prospect of re-stock. 30W and 65W models will be released in the summer, so it's a good idea to start considering after the lineup is complete, except for those who need it right now. 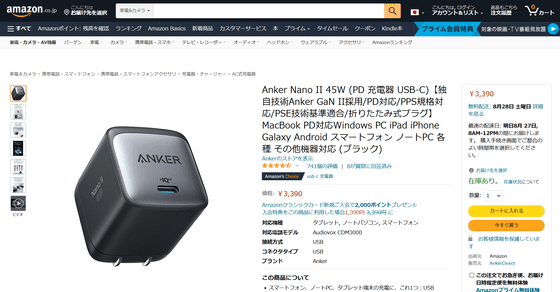