A person who received the new coronavirus vaccine collects blood every day to investigate 'How did the virus antibody titer change?' And released it as data. 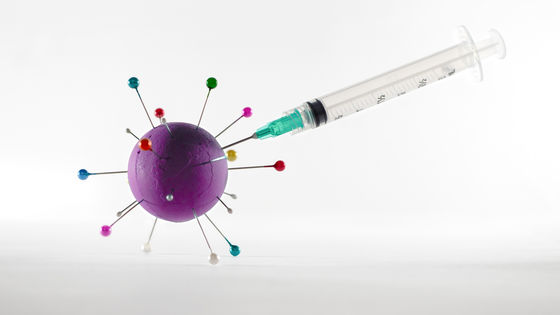 @Souyakuchan, who said that he actually inoculated the new coronavirus vaccine, asked 'how the virus antibody titer changed' from the first vaccination to the second inoculation, repeating blood sampling every day. It was clarified by examining the value.

@Souyakuchan, who inoculated the new corona virus vaccine 'BNT162b2 ' developed by Pfizer, a major American pharmaceutical company, and BioNTech, a biotechnology company, on March 19, 2021, said, 'Because it's a big deal, I collect blood every day and antibody titer. I'm going to see the changes in the antibody titer, 'so I'm tracking how the antibody titer changes from the first inoculation while actually collecting blood.

Inoculated. Since it's a big deal, I'll take blood every day and see how the antibody titer changes. # day_0 pic.twitter.com/KJU6buQzWY

As for the impression on the day of vaccination, he tweeted, 'There is slight tenderness in the deltoid muscle at the time of vaccination and pain when raising the upper arm. If you feel comfortable, you will not feel any discomfort.' The next day, 'If you raise the upper arm slightly in the abduction direction on the struck side, the inoculation site (deltoid muscle) hurts (raising in the shoulder flexion direction does not hurt so much). There is tender pain. Redness and swelling. , No feeling of heat. No other special symptoms. ”At the same time, I posted a photo of the blood sampling taken to measure the antibody titer.

One day after inoculation. Raising the upper arm slightly in the abduction direction on the struck side causes pain at the inoculation site (deltoid muscle) (raising in the shoulder flexion direction does not hurt so much). There is tenderness. No redness, swelling or warmth. No other special symptoms.
Self-collection for antibody titer measurement. I will measure several of them at a later date. pic.twitter.com/RCYkYiihaO

Please wait, the quantitative CLIA measurement results up to yesterday (11th day after inoculation) (* IgG and IgM axis scales are separate).
IgG seems to have started up around the 8th to 9th days. As of the day before yesterday, the cut-off value has been exceeded.
Continue to collect blood daily until a plateau is reached to some extent. pic.twitter.com/kXWNgYbu7O

At 14 days after vaccination, IgM finally increased and became positive.

No change in physical condition.
Kominati ®︎ 14th blood sampling after the first inoculation. Finally, immunochromatography showed weak positive results for both IgG and IgM.
It seems that the dynamic range of the immunochromatography kit can be confirmed together with the data of the quantitative CLIA. pic.twitter.com/w6h60RxGXH

He also tweeted that the pain at the inoculation site was the same as the first one, and one day after the second vaccination, the fever began to rise and he felt a slight pain in the muscles of the whole body like when he was infected with influenza.

The morning after the second inoculation. It rose to a maximum of 38.4 ° C last night, but this morning it was around ~ 37.4 ° C. The pale muscle pain in my whole body that I had yesterday was almost alleviated, and the dullness during body movement disappeared. No chills, no headaches, no gastrointestinal symptoms, no respiratory symptoms.

・ Don't relax because you haven't been immunized for a while after the first vaccination. ・ The antibody titer will increase many times with two vaccinations (so you should hit it twice).

As you can see, I stretched my body and self-collected blood dozens of times and visualized it in a graph (n = 1), so you can use it to explain and persuade others! #Corona vaccine pic.twitter.com/HMkZ5ZKRlQ

Please note that the number of subjects is '1' because the graph was created from the blood sampling data of @souyakuchan. However, similar changes in antibody titers have been reported by people who have been vaccinated in the same way, so the trend of the graph is 'you can think of it as known evidence,' @souyakuchan tweeted.

Since the graph is buzzing, n = 1, there is no doubt that it is for reference only, but there have already been many reports that the antibody titer behaves in the same way in fixed-point observation blood sampling before and after inoculation, and the tendency of this graph to change. Since it is a natural exercise, it can be considered as known evidence (it only seems to have an increased impact because it fills the time series in between).