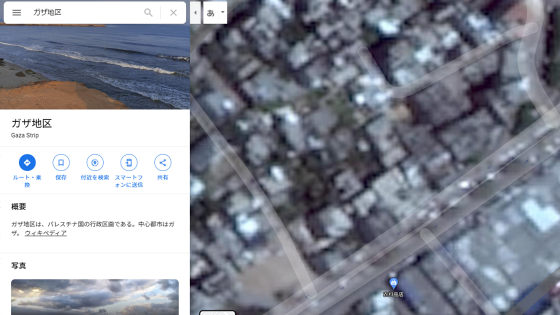 The Gaza Strip in Palestine is a region that is besieged and frequently attacked by the Israeli army. Human rights groups and researchers check the persecution situation in each region of the world from satellite images, but it is pointed out that the quality of satellite images in the Gaza Strip is too low to confirm the state of the city on Google Maps. It has been.

I know this is the least of the issues going on in Gaza now, but it's absurd that Google (and Bing, and even Yandex) refuse to provide non-potato satellite imagery for some of the most densely populated places on earth, and are regularly hit by Israeli airstrikes. pic.twitter.com/c6DtcYXYvr

The Gaza Strip is often the target of attacks by Israeli forces, so researchers observing the situation in the area need to know which location was attacked. However, none of the satellite images displayed on Google Maps are low resolution and you cannot clearly see what the city looks like.

The following is how the Gaza Strip was actually displayed with an aerial photograph of Google Maps. You can see the city vaguely, but the image is so blurry that it is difficult to see the boundaries between buildings. Zooming in didn't reveal the details.

On the other hand, the following is the state of the city of

You can clearly see the number and color of parked cars.

Google receives satellite images from companies that handle satellite products such as Maxar and Planet Labs, and earth observation services, and stitches them together to create aerial photographs of Google Maps. And Google is trying to make Google Maps the 'most reflective of the world's changes' by updating these images on a regular basis, a 2020 blog post said . At that time, Google explained, 'We will frequently update places where the population density is particularly high and roads and buildings are frequently constructed.'

However, Google is currently displaying clear images of less densely populated areas than the Gaza Strip, which is considered to be 'one of the most densely populated areas in the world.' 'The latest Google Earth image is from 2016 and looks like garbage,' Torah said of a photo of the Gaza Strip, while zooming in on a random rural area in Syria has captured highs since 2016. There were more than 20 images with resolution. '

The most recent Google Earth image is from 2016 and looks like trash. I zoomed in on some random rural area of Syria and it has had 20+ images taken since that time, in very high resolution. Pic.twitter.com/KrYbku1oxe

In 1997, a law called 'Kyl–Bingaman Amendment' was enforced in the United States, banning the use of clear satellite images for important military installations in the United States and its allies. Under the influence of this law, American companies were prohibited from selling clear satellite images of Israel and Palestine, but the law only stipulates some facilities. It does not impose restrictions on satellite imagery in a wide area, such as the entire Gaza Strip. In 2020, a law amendment relaxed the 2 meter ground sample distance limit to 0.4 meters.

Satellite images have become important in investigating human rights abuses, and the persecution of the Rohingya in Myanmar was also confirmed by satellite images as the village was burning extensively. Google, which provides a service that allows you to view satellite images, is also required to update high-resolution images frequently.