The market share of OS for PC has been 'Windows first, macOS second' for a long time. However, according to a report by market data company International Data Corporation (IDC) and IT news site GeekWire, Google's Chrome OS emerged as the second largest market share of OS for PCs in 2020, and macOS finally fell to third place. It was announced that it was done. Below is a graph showing the changes in the global market share of OS for PCs in 2020. Windows (blue) is slowly declining market share, and macOS (green) is almost flat. And Chrome OS (purple) is slowly rising. 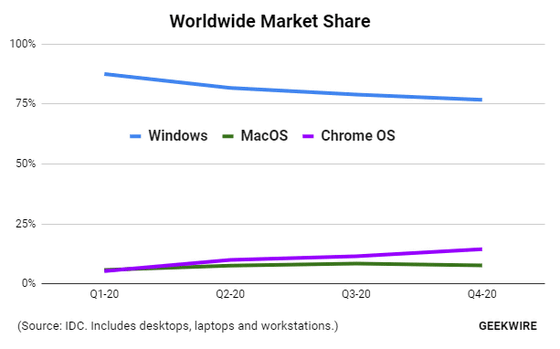 And Chrome OS jumped to 10.0% in the second quarter, surpassing the market share of macOS. In addition, it increased its market share to 11.5% in the third quarter and 14.4% in the fourth quarter, nearly three times that of the first quarter.

GeekWire speculates that the reason Chrome OS gained market share was the sharp rise in PC demand due to the impact of the new coronavirus pandemic. Chromebooks with Chrome OS have been released by PC makers such as Acer, Asus, Dell, HP and Lenovo, and are particularly popular in the low-cost laptop market. In particular, GeekWire believes that the pandemic forced schools and other educational institutions to take remote lessons, resulting in a significant increase in sales of Chromebooks for educational purposes and an increase in the market share of Chrome OS. 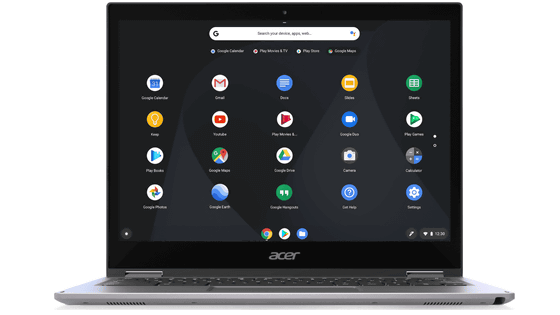 GeekWire said, 'Until the pandemic, Chrome OS's success was primarily limited to American education. Will Chrome OS grow only in American education in the coming months, or will it spread around the world? You'll see what we're doing, and Apple and Microsoft will adjust their strategies accordingly. '