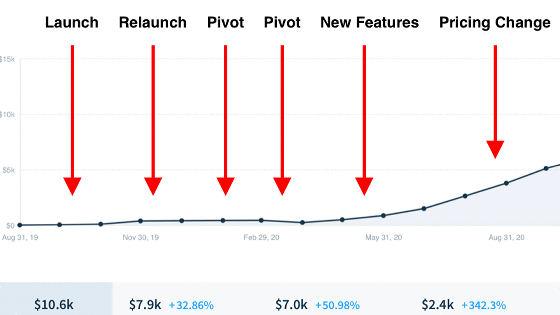 Rather than selling software as a license, 'SaaS', which is provided to users via the Internet, often takes the form of monthly or annual billing. When an individual developer provides a service with SaaS, it is necessary not only to develop the service from scratch by himself, but also to carry out unfamiliar marketing activities, and the road to actually making a profit is beyond imagination. It's steep.

Jon Yongfook , who left the company and started a startup, develops and operates a tool ' Bannerbear ' for automating and expanding marketing, and although he spent a year with zero income, after that, monthly ordinary income (MRR) ) It is said that it has reached 10,000 dollars (about 1 million yen), and the road to that point is open to the public.

Here's How I Bootstrapped a SaaS to 10k MRR --Bannerbear
https://www.bannerbear.com/journey-to-10k-mrr/

Below is a graph of how Bannerbear achieved MRR of 1 million yen. The vertical axis is the amount of MRR and the horizontal axis is the date, starting on August 31, 2019. From the left, the arrows are Bannerbear launch, re-launch, two business conversions, new function announcement, price change, positioning, and after the second business conversion, profits will gradually increase from around the announcement of new functions. You can see that it was done. 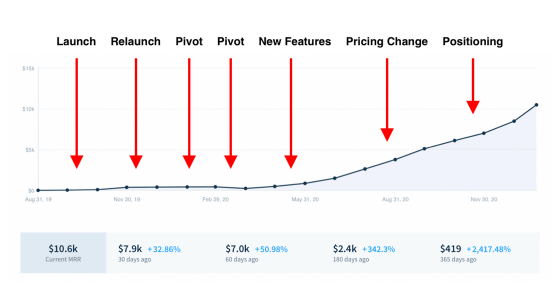 Going back to that time, it seems that there was no income from January to July 31, 2019.

At that time, Yongfook tried to set up 12 startups in 12 months after quitting the company he was working for, and was defeated brilliantly. However, thanks to this challenge, the technology field that he is interested in became clear. In the challenge, Yongfook was able to consistently launch a startup thanks to his detailed technology rather than reaching for new technology. It's a failure to monetize, but 'it was a good practice,' says Yongfook.

After failing to launch multiple startups, Yongfook will begin focusing on the area of 'image generation' that he is most interested in from September 2019. The graph from September 1st to December 31st is as follows, and reached MRR $ 400 (about 41,800 yen) in December.

At that time, a tool called 'Preview mojo' developed by Yongfook was to generate images for

OGP based on a few templates. There aren't many MRRs that cost about 40,000 yen, but Yongfook, who felt that the direction to go was right, proceeded with the development as it was.

After that, Yongfook thought that the market targeted by the product was too small, and implemented a marketing strategy of changing the brand name to 'Bannerbear' without changing the app itself. Although this strategy was successful and attracted the interest of new users, traffic increased, but it did not directly affect revenue. Targeting a niche market can be useful at times, but if it's too niche, you'll need to expand the market, Yongfook notes.

Until March 2020, Yongfook was selling at Shopify 's app store, but decided that it had no traction and withdrew. We narrowed down Bannerbear to just one API service and launched a new template editor and REST API. As a result, many new use cases with new target groups have been created.

Looking at the graph, we can see that profits have begun to grow steadily from around April 2020.

For the next six months, Yongfook devoted 50% of his time to coding and the remaining 50% to marketing. Specifically, after coding for a week, he repeated the act of tweeting and posting blogs for the next week.

The following is an example, and sometimes I write an article on the Bannerbear website such as 'How to Get Your First 25 SaaS Customers' ...

How to Get Your First 25 SaaS Customers --Bannerbear
https://www.bannerbear.com/blog/how-to-get-your-first-25-saas-customers/ 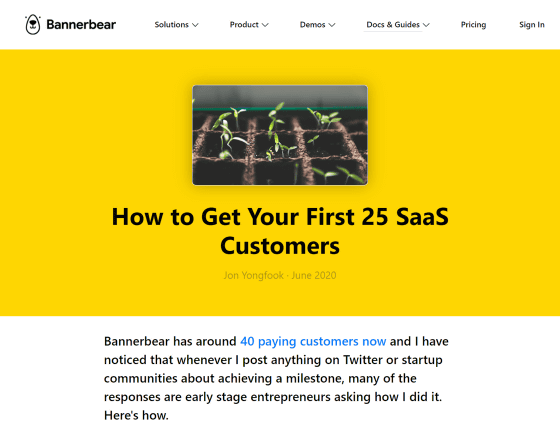 You can also post an article on a posting site called Indie Hackers that says 'Have I entered the Long Slow SaaS Ramp of Death?' (Did I get into the slow and long 'death slope' of SaaS?). Yongfook says that the more articles I wrote, the more SaaS conversions I had.

Have I entered the Long Slow SaaS Ramp of Death?
https://www.indiehackers.com/post/have-i-entered-the-long-slow-saas-ramp-of-death-6a8db1892d 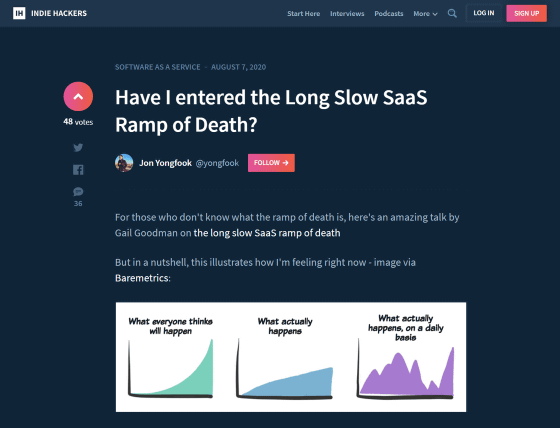 And from November 2020, based on the job theory , we recognize that the needs of Bannerbear are 'marketing automation' and 'marketing expansion'. This is intended for two types of users: those who have set up a lot of automation in Zapier , and those who are using the API to integrate a large number of tools.

As a result, in January 2021, Bannerbear was able to achieve an MRR of about 1 million yen.