Boeing 737 MAX jet airliner, manufactured by the major aircraft manufacturer Boeing , suffered two crashes in a short period from October 2018 to March 2019. Boeing has decided to pay a total of more than $ 2.5 billion (about 260 billion yen) because it was found that 'Boeing intentionally deceived the government agency in the safety evaluation of the aircraft' by the investigation of the crash accident by the government agency. It was. 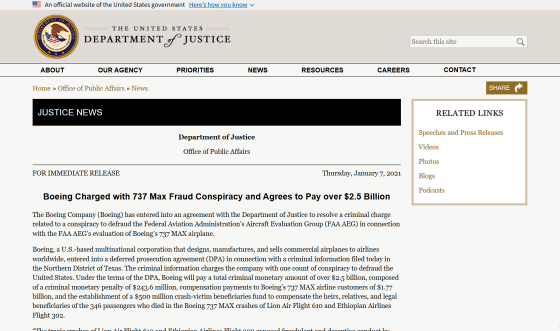 Boeing to pay more than $ 2.5 billion to settle criminal conspiracy charge over 737 Max

The Lion Air Flight 610 crash in October 2018 and the Ethiopian Airlines Flight 302 crash in March 2019 were both crashes by Boeing 737 MAX, and the total number of passengers and passengers killed in the two accidents was 346. Go up to. These are believed to have been caused by problems with the Boeing 737 MAX and have been investigated by the Department of Justice and others.

As a result of the investigation, it was found that there was a problem with the automatic control system called ' Maneuvering Characteristic Enhancement System (MCAS) ' installed in the Boeing 737 MAX. In addition, it seems that the system that warns the pilot of potential sensor mismatch was an optional function, and neither Lion Air nor Ethiopian Airlines purchased this option . 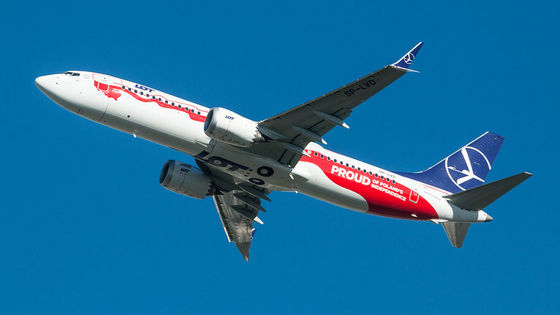 The Department of Justice, which was conducting an investigation into Boeing, agreed with Boeing on January 7, 2021 to postpone the charges for serious fraud, saying that it 'fooled the government agency to evaluate the safety of the Boeing 737 MAX' ( Announced that it has signed a DPA) . DPA is a system in which the prosecutor and the suspect conclude an agreement and 'if the suspect observes certain conditions, the criminal charge will be postponed', and if no additional violation is found in the future, the prosecution will be withdrawn after three years. That's right.

The Justice Department told the FAA, which conducted a safety assessment prior to the introduction of the Boeing 737 MAX, that Boeing employees 'made misleading statements, did not tell all the truth, and failed to communicate adequately.' .. He has accused the FAA of deliberately deceiving the capabilities of the aircraft's control system, hampering the authorities' ability to ensure the safety of people in flight, resulting in a serious crash.

'The tragic crash of Lion Air 610 and Ethiopian Airlines 302 is a fraudulent and deceptive act by employees of one of the world's leading aircraft manufacturers,' said David Burns, Deputy Attorney for the Criminal Division of the Justice Department. 'Boeing employees prioritized profits over candidity through efforts to hide important information about the operation of the 737 MAX aircraft from the FAA and conceal fraud.'

The operation of the Boeing 737 MAX has been suspended worldwide since March 2019, but in December 2020, about one year and nine months after the Ethiopian Airlines accident, the Boeing 737 MAX carrying general passengers was carried. Operations have resumed.