What is the method used by the ransomware 'Ryuk' that robbed the ransom of 15.5 billion yen? Ransomware attacks on businesses and public institutions have become a problem all over the world, and in 2020, patients died as a result of ransomware attacks on hospitals . Meanwhile, it has been revealed that the representative ransomware ' Ryuk ' earns a ransom of 150 million dollars (about 15.5 billion yen).

A study by security firms Advanced Intelligence and HYAS found that Ryuk has earned more than $ 150 million in ransom so far.

The image below shows the process of converting Bitcoin that Ryuk received as a ransom from an attack target into cash. A study by Advanced Intelligence revealed that Ryuk is cashing on Asia-based cryptocurrency exchanges Huobi and Binance . Generally, strict identity verification is required for cashing crypto assets on exchanges, but since the identity verification procedure is not strictly operated on the exchange used by Ryuk, it is used for money laundering. Advanced Intelligence points out that this is often the case. 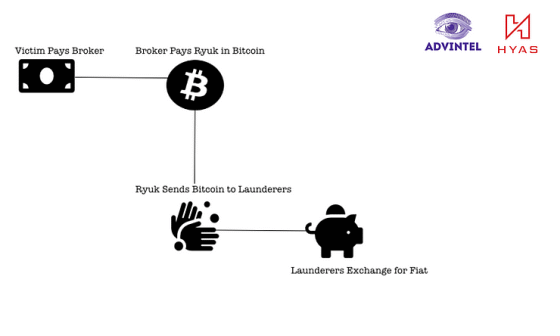 Before launching a ransomware attack by Ryuk, an attacker

infects the target with malware such as ' Emotet ', ' Zloader ', and ' Qakbot ' and collects various information. After that, Ryuk will launch a ransomware attack on the target who is judged to be capable of paying a large ransom from the collected information. By using this method, an attacker using Ryuk has succeeded in stealing ransom from hundreds of thousands of dollars (tens of millions of yen) to millions of dollars (hundreds of millions of yen) in one attack.

Advanced Intelligence 'restricts the execution of macros in Microsoft Office', 'updates remote access points and uses' two-step authentication '', and 'remote access tools can be used' to prevent attacks by ransomware. We recommend that you take measures such as 'Limiting IP'.