From January 5, 2021 (Tuesday), ' Apple tea made only with apples ' has appeared in Lawson. As the name suggests, apple chips are packed in a tea bag and sprinkled with the included apple honey to enjoy it. As the name suggests, it is made from 'only apples', and I was wondering, 'Does it really taste like tea?' I actually drank it.

Apple tea made only with apples | Lawson official website

This is the 'apple tea made only with apples' purchased at Lawson. When you take it home, you can attach an M size lid. When I opened the lid, I found a tea bag with apple chips in the light brown tea. There was no indication of the ingredients on the side of the cup, and the 'secret' that the taste changed in '5 minutes', '10 minutes', and '15 minutes' was stated. Regarding this point, when I bought it at Lawson, the clerk said, 'The sweetness will change over time!' When I opened the lid, I found an apple-colored syrup. If you lick it a little, it tastes like a sweet apple with a slight acidity. 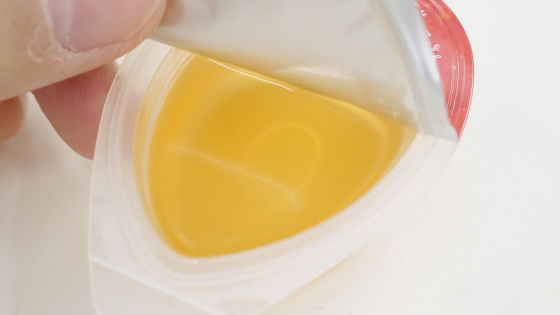 I'll try drinking it without adding apple honey for the time being. When you mix it lightly with the muddler you brought back and drink it, the scent of honey that makes you feel like your nose is close to the apple before peeling spreads slowly in your mouth. It does not have the concentrated sweetness and sourness of 100% apple juice, and has a soft and gentle apple feel overall. The faint sweetness had a candy-like sensation that was entwined with the tongue rather than fruit juice. At this point, 5 minutes had passed since the purchase, so according to the 'secret of how to drink' written on the cup, the taste was 'Amasuppa'. Next, I'll add apple honey and drink it. The scent of apples has become clearer than before, and the acidity has increased, making it a little easier to drink. Next, in order to experience 'Amasupappa', I will try drinking it 10 minutes after the purchase. The sweetness that entwined the tongue remained the same, but I was able to feel a slight sourness in it. It's been 15 minutes since I bought it. The sourness, which was only faintly felt, has increased moderately, and the sourness can be felt throughout the tongue. As it was named 'tea', the drinking comfort was closer to that of herbal tea with a gentle aroma rather than juice, and it seemed to be a good time to take a break in the afternoon. 'Apple tea made only with apples' is on sale at Lawson nationwide, and the price is 260 yen including tax.