Adobe Photoshop Lightroom ' developed and sold by Adobe is software for photo editing, and the permanent license version ' Lightroom 6 ' was released in 2015. However, since the beginning of December 2020, there have been reports that 'If you try to use some functions in Lightroom 6, it will crash', and it is reported that 'Lightroom 6 is not permanent'. .. 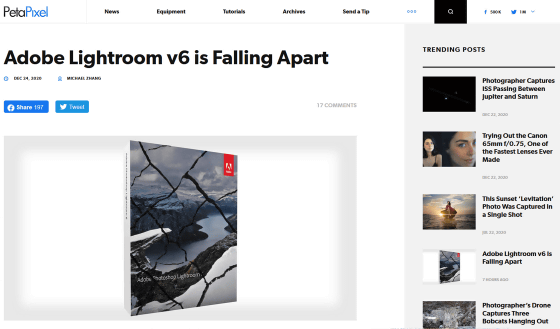 Launched in 2015, Lightroom 6 is a one-time-use software, and once purchased, the software can be used permanently. In 2017, Lightroom 6 was discontinued and all Lightroom purchase-out methods were abolished, and at the time of article creation, only the monthly billing (subscription) method 'Lightroom CC' is offered.

Adobe has announced that it will end support for the buy-out Lightroom 6 at the end of 2017 with the final version update. Users who still didn't want to move to the subscription method continued to use Lightroom 6, but in December 2020, on the official Lightroom 6 forum, 'Lightroom 6 crashes when trying to use certain features.' Has been reported. MStutz reported that 'Opening the face recognition module crashes Lightroom for the past week', either due to the December 2020 Windows Update , or Photoshop Elements 2021 , Adobe Premiere. I mentioned that the installation of Elements 2021 might be involved. 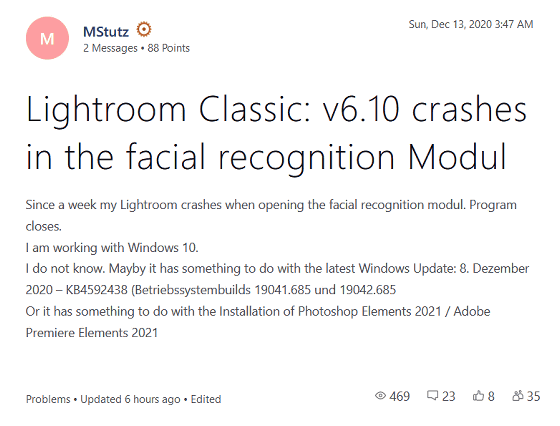 cldmitry, has also reported that the app crashes when using the facial recognition module as well as the virtual copy feature that duplicates photo metadata.

A user named dale_5435052 stated the solution 'I changed the date on my PC to October 1st and mysteriously the face recognition module worked' and it turned out that the problem was with the system date. did. 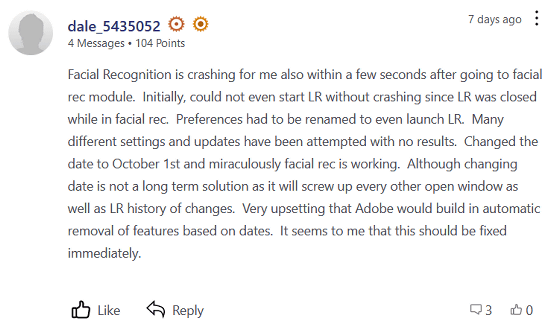 PetaPixel, a tech media that reported this situation, said that 'the third party license that Adobe used to function the app has expired' caused a series of problems because the problem would be solved by setting the system date back. It points out that it may be.

A user named TML59 commented on the forum that the problem is that Adobe's face recognition function is licensed from other companies in the form of DLL . It's okay for Adobe to end support for Lightroom 6, but he argued that Adobe should take responsibility for any flaws that could make Lightroom 6 unusable due to an expired license. 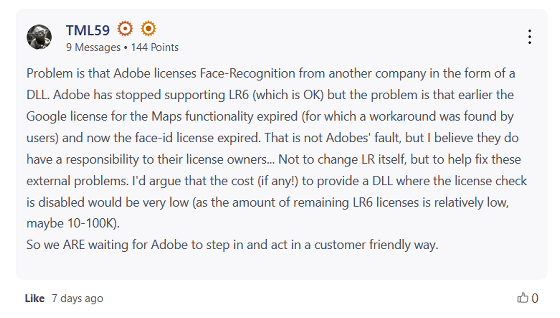 This is not the first time that Lightroom 6's functions can no longer be used, and in 2018 it was

reported that the map module function that allows you to check the location where the photo was taken on Google Maps cannot be used in Lightroom 6 . .. This is due to the expiration of the Google Maps API key used for the function, and it can be fixed by replacing the Adobe API key with a personal API key .

PetaPixel pointed out that the third-party license may continue to expire in the wake of this event, and over time Lightroom 6 may not be able to use more features. A user named avpman said, 'I bought Lightroom 6 for a perpetual license. It might be interesting to discuss the definition of the word'permanent'for facial recognition DLLs that are out of license. '.

When PetaPixel contacted Adobe about a series of issues, an Adobe spokeswoman said, 'The perpetual license version of Lightroom Classic is not supported.' He said that Lightroom 6 is no longer supported, so technical support, security fixes, and bug fixes are not available.

In addition, Adobe has achieved a significant increase in sales in 2020, and PetaPixel points out that it would be a wise decision from a business point of view to move to a subscription method that can secure continuous income. I will.

As Adobe's Earnings Soar, It Plans to Invest Further in AI Editing
https://petapixel.com/2020/12/11/as-adobes-earnings-soar-it-plans-to-invest-further-in-ai-editing/ 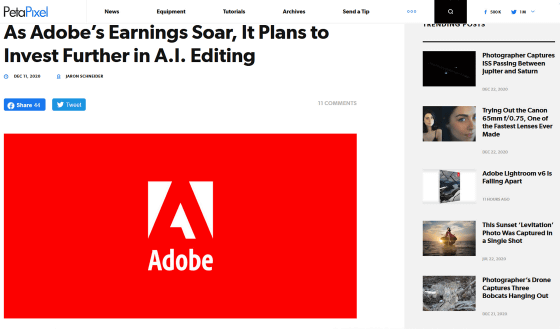