' Nissin Donbei backfat-style pork garlic rich curry thick soba ' that matches the thick soba with a satisfying taste to the rich curry soup with the taste of pork and garlic will be on Tuesday, December 8, 2020 It will appear only in Seven-Eleven. The second edition of '

Nissin Donbei backfat-style pork garlic rich chili oil thick soba ' that overturned the preconceived notion that 'soba is light' has arrived at the editorial department, so a pair of gutsuri system I tried it first. On the top of the cup, a small bag of 'special thick oil', which is a feature of the 'rich thick soba' series, is fixed with an adhesive. As raw materials, 'pork fat', 'curry powder' and 'pork seasoning' are used in the soup, and 'processed lard' is also used as a savory soup, so you can expect a crispy curry soup. .. When I opened the lid of the cup, I saw a white 'backfat-like sardine' in it along with the char siu. Immediately pour hot water into the cup noodles and wait for 5 minutes while warming a small bag of 'special thick oil' on the lid. Mix well and you're done. First of all, I will take a sip of soup with lard-like scent. The soup gives the impression of curry udon soup for a moment, but the rich 'greasy sensation' that ordinary curry udon does not have remains in the mouth with a feeling of oil film. Furthermore, after swallowing, the scent of garlic pierced through the nose, and the soup had a rich taste like grated garlic in curry roux. 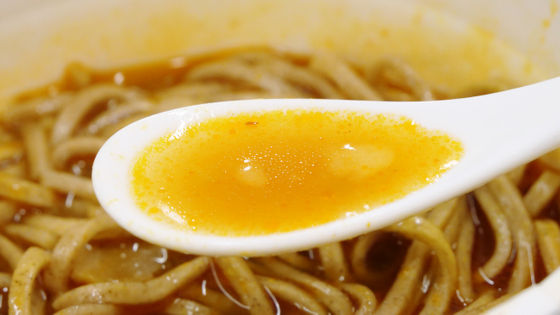 The thick noodles have a moderately firm texture and a strong aroma of buckwheat, so there is a taste of buckwheat that is not buried in the rich curry soup. Thanks to that, I felt that the taste of gutsuri ramen and soba were fused at a high level to create a cup.