What was the basis for scientists who predicted 14 years ago that 'universal devices will become mainstream'? 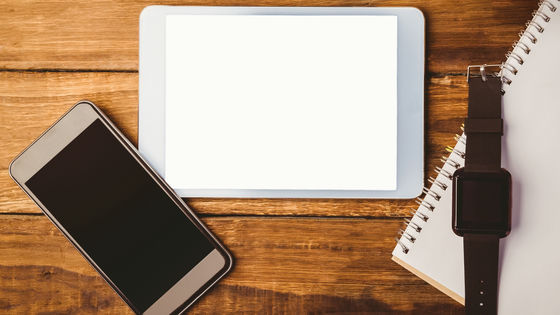 In 2020, devices that can do various things with one device such as smartphones and tablets will become widespread. Computer scientist Dan Bricklin predicted 14 years ago that the demand for this 'universal device' would increase. Bricklin predicted the future from a sales method called the ' long tail .'

When The Long Tail Wags The Dog
http://www.bricklin.com/tailwagsdog.htm

Many stores perform well under Pareto's law , where the top 20% of high-selling items make up 80% of total sales. The graph below shows the relationship between the items of a product and the number of units sold (Units Sold). The vertical axis represents the number of sales, the horizontal axis represents the item, and it can be seen that a large number of sales are concentrated on some small items. The state is that 'sales of high-end products more than make up for low-end sales.' 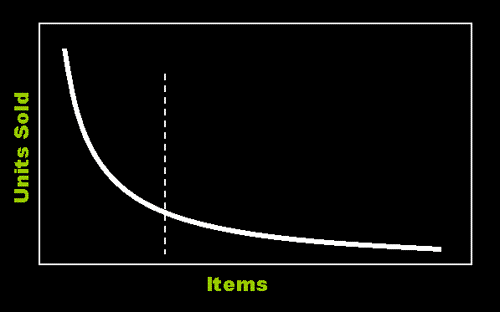 On the right side of the graph, by enriching the products with low sales, even if the sales of each one are low, the total sales will be large. The long tail is a business model that increases sales by offering products with low needs that cannot be realized in physical stores. 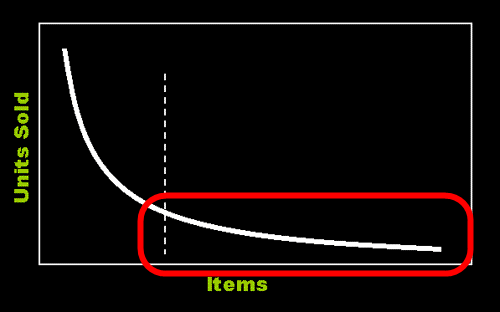 Brooklyn applied this long-tail idea to personal digital assistants and insisted in 2006 that 'a versatile device that allows users to freely download their favorite applications will succeed.' Mr. Bricklin is also known for inventing the world's first spreadsheet software for PC ' VisiCalc '.

'It's not just the popular apps themselves, but the number of apps that have potential needs,' Brooklyn said. 'The availability of multiple niche apps that are in low demand is a device. It can be said that it will boost the sales of. '

Assuming that the horizontal axis of the graph below shows the apps in Range of item Available, and the vertical axis represents the Value to Particular Purchaser for any purchaser. To do. For example, apps such as calendars, calling apps, and internet browsers that many people have installed occupy the left side of the graph. Vertical lines are the apps (Must Have items) that users need. From this, we can see that even if the demand itself is low, the more “absolutely necessary” a particular app is, the more valuable it is to the user. 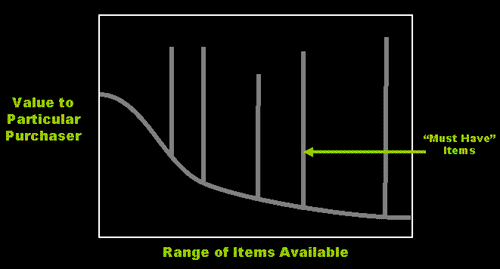 Brooklyn has also added an unknown app (May Have In The Future Must Have Items) that will appear on the graph in the future. Unknown apps are shown by dashed lines, and it is believed that there are more low-demand apps than high-demand apps. 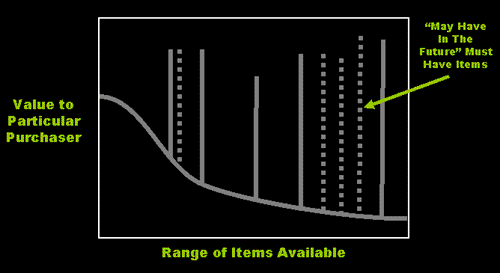 Below is a graph of the value of a highly specialized device (Restricted, Special Purpose System) that provides only popular apps and a highly versatile device (General Purpose System) that can also provide niche apps. It seems that versatile devices have a higher overall value, and highly specialized devices have only the value of apps that are in high demand on the left side of the graph. 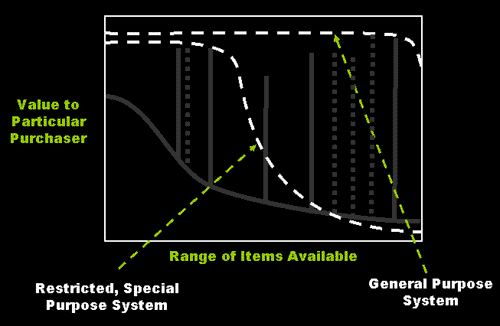 On a versatile device, even if the value of a high-demand app declines, many niche apps can be downloaded, allowing the versatility of the app to cover the overall value, Bricklin said. It was. In other words, it is possible to increase the value of the device by making it possible to download many low-demand apps, such as the long tail, which increases overall sales by offering low-demand products. 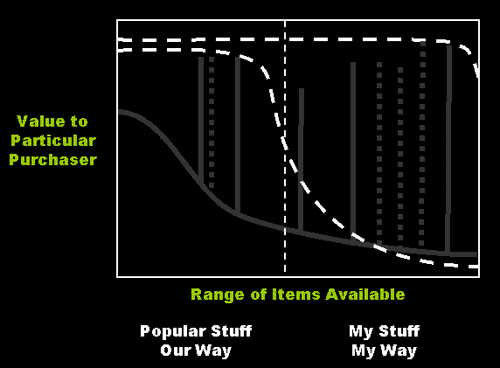 In fact, in 2020, devices such as the iPhone that allow you to freely install various apps will become the mainstream. Brooklyn commented on his forecast: 'In many areas, I think only products that can serve both the left and right sides of the graph will be successful in the long run. This forecasting method is taken for granted today. It will help explain the emergence of many other systems and will help evaluate future systems and business models. '