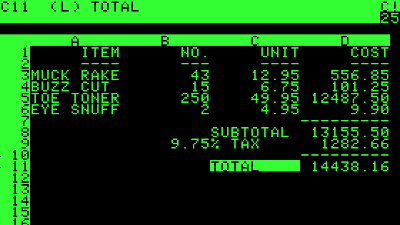 Including google spreadsheets , now in 1979, spreadsheets first appeared in the world in everyday life. Although it is a spreadsheet that is used casually, it is a dramatic tool that turned into a turning point in which people use computers in their daily lives, and tracing its history also gives suggestions for contemporary “automation” problems. It is possible to

The advertisement for the world's first spreadsheet software 'VisiCalc' was first published in May 1979. Dan Bricklin , the creator of VisiCalc, is posting advertisements from that time on his own website. Then in June of the same year VisiCalc was officially announced at the National Computer Conference . Mr. Brixlin became a project leader for WPS-8 at Digital Equipment Corporation after graduating from Massachusetts Institute of Technology, but he entered Harvard Business School in 1977 as he felt the need to learn about business. . And when I noticed a mistake in the financial model in class and tried to correct the parameters, I needed to erase most of the table, so I came up with an 'electronic spreadsheet' that processes calculations on a computer. .

Meet the inventor of the electronic spreadsheet | Dan Bricklin-YouTube


After thinking of creating a software company after obtaining an MBA, Bricklen received advice from a university professor for electronic spreadsheets. For example, Barbara Jackson, one of the advisers, is convinced that the software needs to be simple to use because its electronic spreadsheet rival is the 'back of the envelope.' He then reunited with Bob Frankston, a friend at MIT, and the two began working on software.

With advice from Dan Filstra, who runs Personal Software, who was introduced by a university professor, the two geeks built a prototype within a week and put the code into the borrowed Apple II. In the two months from 1978 to 1979, we improved and developed VisiCalc, which led to the release in 1979.

At that time, most personal computers were viewed as “love's toys,” and business-use computers were massive. However, with the advent of VisiCalc, Apple II will be considered as a 'business tool' rather than a toy. VisiCalc, which has sold 700,000 bottles in six years, is said to have been one of the 'explosive industry drivers' and 'the Apple II has made it a success,' by former CEO Steve Jobs.


About Bricklin, Microsoft's lead software designer, Ray Ozzie , has named him one of the largest contributors to making computer technology a part of everyday life. Computers at that time were used by administrators of nuclear power plants, and not by the general public, but because Apple II, which has spreadsheet software, made the computers familiar to people at once. The impact of VisiCalc was also reflected by the fact that Jean-Louis Gausse , the president of the product who saw the VisiCalc demo in 1981, said that 'I no longer need to be a programmer to use a computer.' I can hear you.

Meanwhile, Bricklin noticed that his work was popular because the Wall Street Journal commented that 'Washington uses legal pads and VisiCalc to see how the budget works.' That's when I saw it .

Mr. Brixlin has his own experience in TED's talk 'You also have unique background, technology, needs, prototype, discover key issues and tackle it. Through it, change the world It is said that. Such a VisiCalc story involves learning as a success story, but in the context of today's world, there are other perspectives.

Mr. Bricklin's father originally ran a printing company, and handwritten spreadsheets have been used for hundreds of years in such small businesses. Spreadsheet software deprives the accountant's work, and in fact, compared to 1980, there are fewer than 400,000 accountants in modern America. However, the number of accountants has increased by 600,000. The fact that complex computer calculations are cheaper, more versatile, and more powerful has created new demand. In recent years, it has been shouted that people's work will be taken away by automation, but from the example of VisiCalc, automation is not simply 'a robot takes a job' but more subtle form 'reforms a job' It can be seen as a thing.