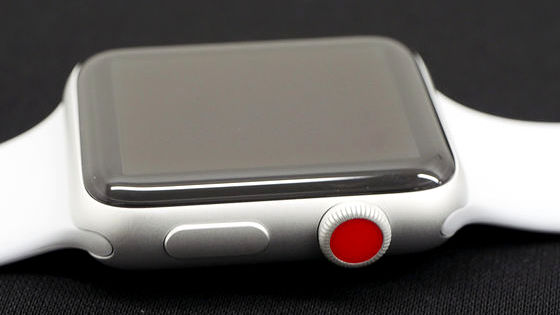 At the time of writing, the 'cheapest model on sale at Apple's official online store' was the Apple Watch Series 3 , which appeared in 2017. After updating this Apple Watch Series 3 to ' watchOS 7 ', the latest OS for Apple Watch distributed from September 16, 2020, there are bugs such as the terminal restarting randomly and performance degradation. Multiple users have reported when it occurs.

On Apple's official support forum, there is a thread reporting bugs in Series 3 due to the update to watchOS 7. After updating Series 3 to watchOS 7, Tjay64 said, 'The device restarted at least three times a day, and the weather, activity ring, date, etc. are no longer displayed on multiple dials. After using it for 8 hours, the battery level was about 80%, but after updating to watchOS 7, it dropped to less than 50%. ' 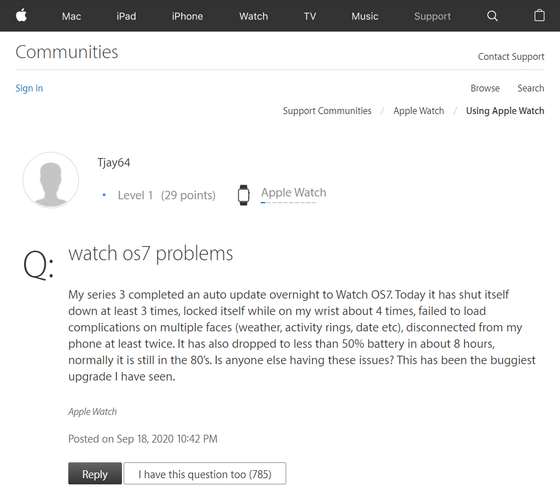 In response to Tjay64's report, multiple Series 3 users commented that they were having the same problem. Other users said, 'In addition to the same problem, I can no longer unlock my MacBook ,' 'I'm having the same bug with my Series 3 Apple Watch Nike,' and 'I can't install new apps.' , Other bugs have also been reported. In addition, several users complained that 'watchOS 6 did not have such a bug' and one user complained that 'watchOS 7 is the most buggy upgrade I have ever seen.' I did.

The same issue has been reported on an unofficial forum run by Apple-related media MacRumors, with users saying that 'reboots occur 2-3 times a day.' There are two reasons why there are so many complaints about this issue. One is that there is no way to downgrade Series 3 to watchOS 6, so users have no way around the bug. Although watchOS 7.0.1 has already been released, it is reported that the bug cannot be fixed.

Second, Apple is adding the Series 3 to its 2020 sales lineup. Apple-related media 9to5Mac said, 'Series 3 seems to be difficult to support some features of watchOS 7 in terms of hardware. It also supports software updates such as watchOS 8 that will be released in the future. I expect it to be a pain, 'he said, suggesting that the Series 3, which has a lot of bugs despite its current sales model, may cause more bugs in the future.

At the time of writing, it is unknown to what extent these bugs are occurring. However, 9to5Mac wrote, 'Judging by the amount of complaints, the bug issue may already be known to Apple.'