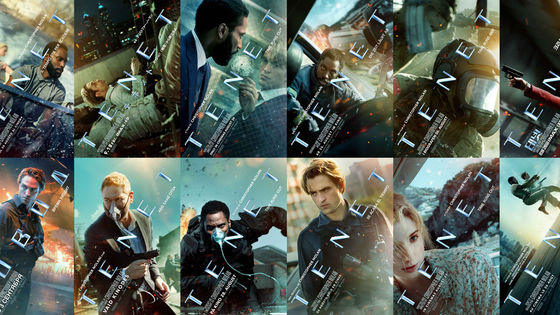 The final trailer of the latest film, ' TENET Tennet ', directed by

Christopher Nolan, who has worked on many masterpiece films such as the movies ' Interstellar ' and ' Dunkirk ', has been released. Starring is John David Washington, the eldest son of Denzel Washington and a former professional American football player.

The key to the story is 'reverse time'.

A bullet placed on a desk is sucked into a woman's hand as if to demonstrate 'reverse time'.

There is also a scene where the bullet that appeared in the trailer released in July returns to the muzzle .

Time goes backwards everywhere, and bullets shot by members of the special forces are also sucked into the muzzle from the wall.

Robert Pattinson plays Neil, the partner of the nameless man.

Kenneth Braner plays the mysterious villain Andrei Saitor, who has the role of connecting the future and the present.

At the heart of the story is a mission to prevent World War III. And the key to the mission is the mysterious keyword 'TENET'.

Men who jump up high in the sky like super people and enter the skyscrapers. This scene is also included in

the trailer released in December 2019 .

The action scene where time goes backwards is a must-see.

Elizabeth DeVicki plays the wife, Cat, who holds the secret of the saitor .

Cat on the verge of life

An unnamed man who masters the retrograde of time

Explosions on the battlefield contract one after another as time goes backwards...

A flashy building can be restored in an instant.

After the word 'shoot down the plane?'

The trailer ends with the scene of an airliner plunging into the airport.

In addition, Travis Scott's 'The Plan', which is the theme song of 'TENET Tennet' that is also used in the final trailer, has been released on the official YouTube channel, and has been played over 1.7 million times at the time of article creation. I will.