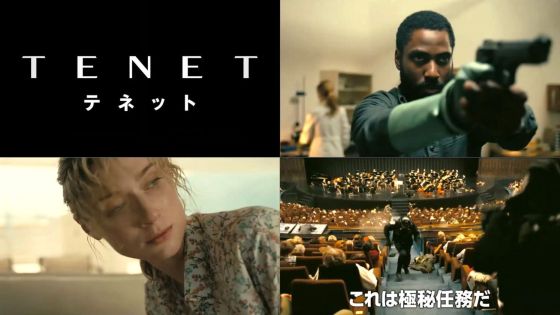 This trailer movie of the time suspense '

TENET Tenet ' scheduled to be released on September 18, 2020 (Friday) by director Christopher Nolan who worked on the movie ' Dark Knight ' series and ' Inception ' has been released. You can get a glimpse of a part of Nolan's original screenplay work that the cast Robert Pattinson describes as ' the crazyest work '.


Somewhere on the ocean...

There is a conversation about 'TENET'.

TENET that the future changes depending on how it is used.

The man, played by John David Washington, is in a dangerous task with TENET.

The purpose is told to women, 'to prevent World War III.'

According to women, it is not the destruction of humanity that is brought about by World War III...

It is said that the result is 'more miserable'.

Women continue to talk about the mysterious power of time. It's not time travel...

When a man shoots a gun in the training field...

The bullet returns to the muzzle.

A man who knows the power to reverse time and is given a more important task than the nation.

With a person who seems to be a business associate played by Robert Pattinson ...

Jump out of the high places and commit yourself to the 'not sanity' mission.

A car that overturned and became bumpy...

Restored without any scratches.

An airplane crashing into a building and burning up...

The debris returns to its original location and is repaired to rewind time.

TENET holds the key to saving the world.

A fierce shootout in a big theater.

The second floor will explode a lot...

The spectators don't even show frightening or fleeing.

And a man who wonders in front of the powerful power to reverse time.

To see why men are afraid of 'disappearance of existence', please check the movie to see.

The meaning of the word 'TENET' and what the retrogression of time is are not revealed in the movie. ``TENET'', which is a word that means creed, principle, etc., may be related to the Latin palindrome that existed in the middle of the first century called the

SATOR formula, and was released in December 2019. In the trailer, a meaningful title logo with the last two letters reversed was displayed.